Mike Woods has an update on Hurricane Ian.

Ian strengthened into a hurricane in the Caribbean Sea on Monday morning, and the FOX Forecast Center expects the storm to rapidly intensify into a major hurricane by Monday night as it approaches western Cuba. A Hurricane Watch has been issued along Florida's Gulf Coast ahead of the expected wind, rain and storm surge from Hurricane Ian later this week.

Rapid intensification occurs when a tropical cyclone's (tropical depression, tropical storm or hurricane) maximum sustained winds increase by at least 35 mph in a 24-hour period, according to the National Hurricane Center.

Florida Gov. Ron DeSantis urged Floridians to take precautions and declared a state of emergency for all 67 counties ahead of the impacts of Hurricane Ian, which could reach Category 4 intensity by Tuesday afternoon in the eastern Gulf of Mexico.

A major hurricane is one that is rated Category 3, 4 or 5 on the Saffir-Simpson Hurricane Wind Scale. 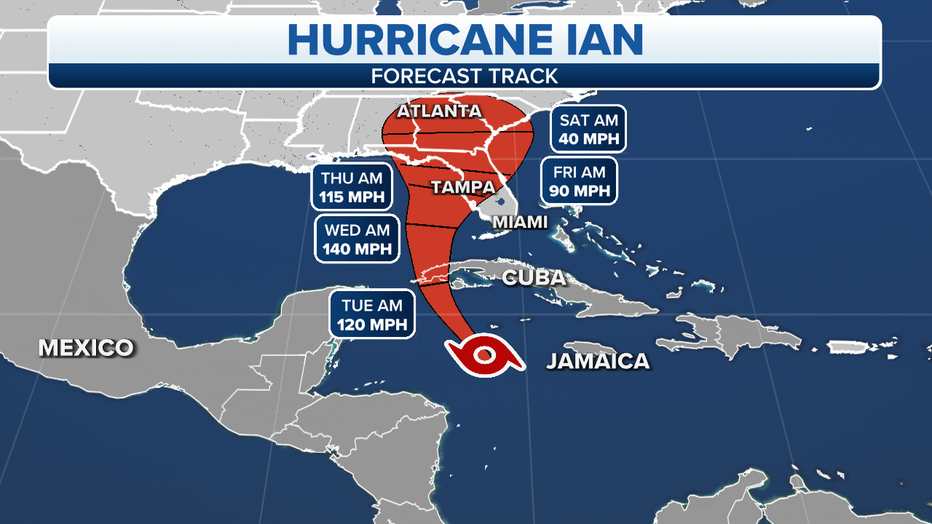 The projected path and intensity of Hurricane Ian. (FOX Weather)

"Make preparations now," DeSantis said at a news conference on Sunday. "I know a lot of people have been doing it throughout the state of Florida."

Hurricane Ian's forecast trended westward over the weekend, but that doesn't mean Floridians should let their guard down, explained Jamie Rhone, the Acting Director of the NHC.

"I'm really concerned that people won’t take the threat seriously, especially for places like Tampa, Naples and Fort Myers. They are looking at the cone or the track, and it looks like it's offshore or west of them, and they are probably downplaying the impact," Rhone told FOX Weather. "But what I want to stress to those people is that it really doesn't take a ton of wind in this part of the country to push water onto the coast. And we could be looking at a decent storm surge event even if the track is offshore."

So while there continues to be some uncertainty, which is typical this far out in time, here's everything the FOX Forecast Center knows about this significant hurricane threat to the southeastern U.S. later this week.

This is a developing story. Read updates here.