Millions of Americans are expected to vote absentee this November to avoid polling places during the coronavirus pandemic, but the U.S. Postal Service is currently facing a financial crisis and changes that have resulted in slower mail delivery nationwide.

Postmaster General Louis DeJoy said this week that he would halt certain operational changes until after the election to “avoid even the appearance of any impact on election mail.”

Critics have blamed some of DeJoy’s initiatives for the mail delays, including the removal of the distinctive blue mailboxes, saying these changes could disrupt the 2020 election.

As a result, many voters may seek alternatives to voting by mail to ensure that their ballot is counted — and they have several options:

Early voting allows people to vote in person on specific dates before Election Day, helping them to avoid long lines. You also don’t need an excuse to vote early.

Forty states and the District of Columbia offer some form of early voting, according to the nonprofit, bipartisan voting information site Vote.org. Some offer in-person voting as early as 45 days before the election.

Some states, including Maryland, New York and Ohio, even allow some early voting on weekends.

Voters can get specific information about the deadlines for where they live by visiting this link and selecting their state and county.

A ballot drop box provides a location where voters can drop off their absentee or mail ballot in a sealed and signed envelope without having to worry about the mail return process.

Many states like Oregon, Washington and Colorado that conduct elections almost entirely by mail have used them with success for several years, installing them in places like libraries and government buildings.

Prior to the coronavirus pandemic, eight states, Arizona, California, Colorado, Hawaii, Montana, New Mexico, Oregon and Washington, already had laws in place allowing ballot drop boxes, according to the National Conference of State Legislatures (NCSL). But a number of states and localities are allowing drop boxes to be used for the November 2020 election. 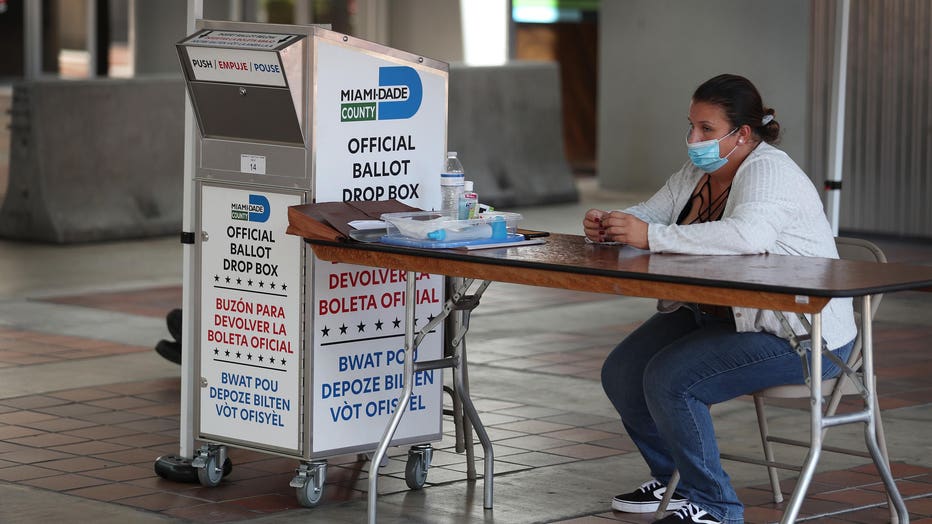 A poll worker waits for voters to help them put their mail-in ballot in an official Miami-Dade County ballot drop box on Aug. 11, 2020 in Miami, Florida. (Photo by Joe Raedle/Getty Images)

In Wisconsin, the five biggest cities in the state won a $6.3 million grant from the nonprofit Center for Tech and Civic Life to help administer the November election, including installation of drop boxes, according to the Associated Press. Milwaukee will use some of its share of the grant money to buy more than a dozen drop boxes to install at libraries and other locations.

But the drop box option has faced recent scrutiny, with President Donald Trump suggesting possible security issues with this method of ballot collection. Election officials in some states, primarily Republican-led ones, have echoed that claim and said adding drop boxes would be too expensive or violate state laws.

Ballot drop boxes are also at the center of a federal lawsuit in Pennsylvania by the Trump administration, the president’s campaign and the Republican National Committee. The lawsuit states the way they were used during the June primary election was unconstitutional, with the Trump campaign and the Republican National Committee seeking to bar them in November.

Drop boxes typically have security measures, such as video surveillance, locks and logs that are completed by election administrators when ballots are collected.

“They’re secure. In some counties, they’re actually under 24-hour video surveillance,” said Michael Thorning with the Bipartisan Policy Center. “We believe that voters in every state should have access to ballot drop boxes.”

Prior to the pandemic, a task force of election officials hosted by the Bipartisan Policy Center agreed that voters in every state should have that as an option to return their ballot.

“Election officials are very good about where to put these things because elections are really run by local public servants, and these people know where the primary traffic areas are in their communities,” Thorning added. “They spend a lot of time figuring out where the best places are to put polling places, so when it comes to drop boxes, they’re very smart about it.”

Most allow voters to hand-deliver a ballot to their local elections office in the days leading up to Election Day.

"This is particularly convenient for voters who have run out of time to send the ballot by mail and have it reach the election official by the deadline," the NCSL points out on its website.

FEC Commissioner Ellen Weintraub discusses the possibilities and reasons behind why there may be a delay in election results.

But not everyone may live close to their county’s board of elections office. Some jurisdictions allow voters to drop off a ballot in person at their local voting location.

Eleven states plus D.C. allow voters to drop off ballots at other locations, which often include any polling place within the county, the NCSL says. These states include Arizona, California, Colorado, Hawaii, Kansas, Montana, New Mexico, North Carolina, Oregon, Utah and Washington.

Two states, New Hampshire and Vermont, allow ballots to be dropped off at a polling place — but it must be the voter’s assigned precinct polling place on Election Day, according to the NCSL.

Twenty-six states and D.C. also allow someone else to return ballots on behalf of voters, including California, Florida, Georgia, Illinois, Minnesota, New Jersey, Oregon, Texas and Virginia, according to the NCSL.

Click here to access your polling place locator, by state, to view specific rules where you live.