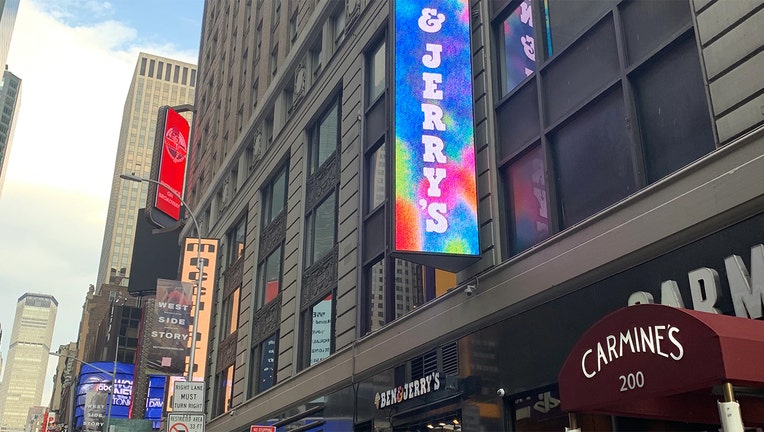 NEW YORK - The Ben & Jerry’s of Times Square once saw lines of tourists waiting for a scoop of Half Baked or Chocolate Fudge Brownie ice cream. Now the popular eatery is fighting to find visitors and business after months of coronavirus restrictions, riots, and a shuttered local economy.

In the wake of a lifeless summer, Ben & Jerry’s shop owners of the Time Square location, in addition to one in Rockefeller Center, are adjusting to the void that followed the closure of Broadway shows and cultural exhibits in the areas.

“Our stores are located in such high-traffic tourist locations,” James Healey, one of the Ben & Jerry’s store owners, told FOX Business. “The biggest challenge we face is the lack of people. We have very high rents because we are in very trafficked, tourist locations. The rent is still the same, but we don’t have the tourists.”

A three-month hiatus from city-wide shutdowns, including closing during week-long riots, has the two franchises exiting what should have been the busiest time of the year. As a seasonal industry, ice cream businesses typically peak from March to September and particularly in tourist-heavy regions, according to Healey.

The suspension of Broadway shows has also had a ripple effect on the surrounding eateries. Without traffic from showgoers and other wandering tourists, Ben & Jerry's owners were forced to find new ways to reach customers and maintain revenue streams. Both Healey and co-owner Jason Mann emerged on the foray with the proposition to go on-demand, as well as incorporate ghost kitchens to expand the radius of patrons.

“We had never done on-demand before because we were so busy every day with tourists and people in the buildings,” Mann told FOX Business. “We entered that market, which is new to us because we have never needed to rely on those things before.”

The transition from serving ice cream from a storefront to supplying customers with the ingredients and tools to produce a similar experience, Healey and Mann tapped into a whole new source of products like new bags, stickers, lids, cups, and storage to hold toppings. Party packages are also included, which includes 10 pints, toppings, cups, spoons, and napkins, catered to events and large groups.

However, delivery services are not enough for the ice cream shops located in non-residential areas of the city.

“With on-demand, you are given a designated territory for delivery,” Mann said. “Our territory in Times Square does not cover residential people, Whereas areas like the Upper East Side include the residential places we need to reach.”

Healey and Mann are toying with the idea of opening dark kitchens in high density neighborhoods like Brooklyn, in order to get on the map. Also known as a ghost kitchen, the Ben & Jerry’s would be serviced without a storefront and used for delivery only.

“We are in the process of looking for spaces that are low impact, low rent, and non-visible, really only meant for the on-demand component,” Healey said.

Both Ben & Jerry's shops are now open with restrictions, including limited hours and dining restrictions. New outdoor setups allow customers to enjoy their treat outside, but customers still remain scarce.

Until normalcy returns with tourism and Broadway shows turn the lights back on, Healey and Mann will continue to innovate and push limits to stay afloat.

“Until the tourists are back, we won’t be back,” Mann said.