Christopher Cooper, a professor of political science at Western Carolina University spoke with LiveNOW from FOX's Josh Breslow about what comes next.

WASHINGTON - House Republicans are moving Tuesday to swiftly establish the marquee investigations of their new majority, voting to create panels focused on China and what they assert is rampant abuse of power in the federal government.

Newly empowered, GOP lawmakers are vowing to bring accountability to the Biden administration, pledging to investigate federal law enforcement agencies, including those that are conducting probes into former President Donald Trump.

Republicans are also establishing a committee to investigate "strategic competition" between the U.S. and China, in line with the party's push for a more hard-line approach to the Asian nation.

The creation of the committees is the first of many investigative steps Republicans plan to take as they settle into their slim majority and attempt to serve as a check against President Joe Biden and his agenda on Capitol Hill.

It amounts to a massive reshuffling away from the oversight priorities of Democrats, who used their majority to form a select committee to investigate the Jan. 6 insurrection at the Capitol. That committee is no more, and Republicans have no plans to revive it, vowing instead to take a closer look at the actions of law enforcement.

Republicans officially labeled one of the committees as reviewing "the Weaponization of the Federal Government," a name that from the outset suggests the panel’s investigations may be one-sided. The probe will be conducted under the jurisdiction of the Judiciary Committee, which is headed by Rep. Jim Jordan, R-Ohio, a hardliner who is a close ally of Trump.

The committee is being given a broad mandate, told to investigate "the expansive role" of the executive branch to "collect information on or otherwise investigate citizens of the United States, including ongoing criminal investigations." Notably, the panel will have access to classified information, a privilege usually reserved for the intelligence committees in the House and Senate.

First up is investigating what they call a coordinated effort by Justice Department "to go after parents" and deem them domestic terrorists following an increase of threats targeting school board members, teachers and other employees in the nation’s public schools.

"The real focus has always been what 14 FBI agents have come and told Judiciary Republican staff about what’s going on with the FBI and the very first one was on the school board," Jordan told reporters Monday. "We’ll start with those individuals and we’ll move from there once we get up and running with who’s on our committee." 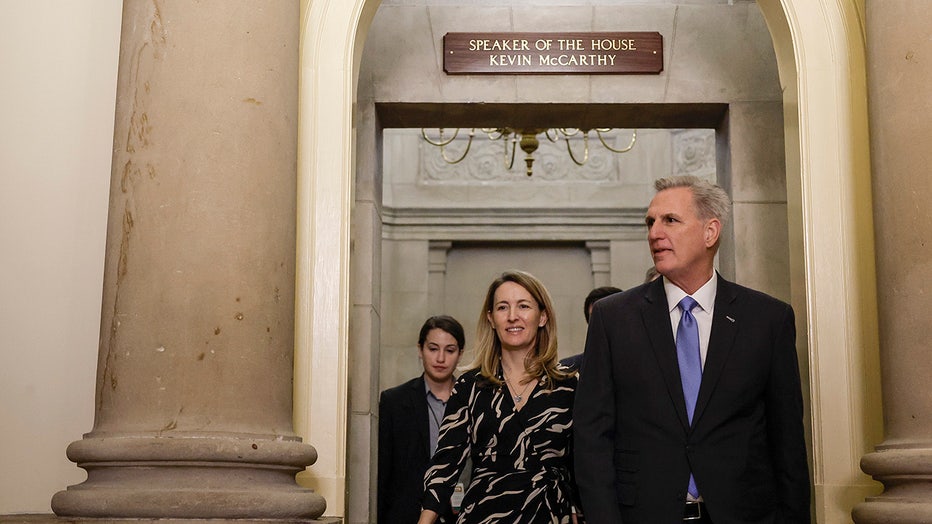 Speaker of the House Kevin McCarthy (R-CA) departs from his office for a series of votes in the U.S. Capitol Building on January 09, 2023 in Washington, DC. (Photo by Anna Moneymaker/Getty Images)

The GOP focus on issues like parents’ rights in schools stems from the unruliness that engulfed local education meetings across the country since the pandemic began, with board members regularly confronted and threatened by angry protesters. There is no evidence the FBI ever declared protesting parents "domestic terrorists," despite Republican rhetoric.

Jordan, who is expected to lead the investigation, said the committee is modeled after the bipartisan "Church Committee," a 1970s congressional investigation that sought to investigate allegations that the U.S. government spied on its own citizens for decades. That investigation led to significant reforms with the passage of the Foreign Intelligence Surveillance Act (FISA), which requires intelligence agencies to seek permission from a secret court before surveilling Americans.

Democrats opposed the creation of the committee, calling it a partisan tool for Republicans to go after the Justice Department as Trump is the subject of several federal criminal investigations, including for his attempts to overturn the 2020 election results and his handling and storing of presidential records at Mar-a-Lago.

"Republicans claim to care about law enforcement. But this new committee is about attacking law enforcement," Rep. Jim McGovern, D-Mass., the ranking member of the Rules Committee, said on the House floor. "It’s about going after people. It’s about destroying people’s careers and lives. It’s about undermining the Department of Justice."

The sharply partisan debate over the Judiciary committee stood in stark contrast to the bipartisan support for the China panel, which will be led by Rep. Mike Gallagher of Wisconsin. Members of both parties said more attention should be devoted to the global implications of China's economic competition strategy.

"You have my word and my commitment. This is not a partisan committee," Speaker Kevin McCarthy said. "That is my hope, my desire, my wish that we speak with one voice that we focus on the challenges that we have."

He added, "The threat is too great for us to bicker with ourselves."

Who will serve on either committee beyond the chairs will be a decision for congressional leaders. The House is in the process of seating the various standing committees, a process that is expected to be contentious as McCarthy has already pledged to retaliate against Democrats for removing several far-right members from their committee assignments in the last Congress.

Some of the names being floated for the Judiciary subcommittee include Rep. Scott Perry, R-Pa., whose phone was seized in August as part of the Justice Department's investigation into the Jan. 6 insurrection.

"Why should I be limited just because someone has made an accusation?" Perry said in a Sunday interview on ABC’s "This Week" with host George Stephanopoulos. "Everybody in America is innocent until proven guilty."

But Democrats are alleging that members like Perry and Jordan will be using the committee as a way to push back on agencies that are investigating them and their allies.

"They’re effectively trying to pardon themselves with the creation of this select committee," McGovern said. "This is unconscionable."