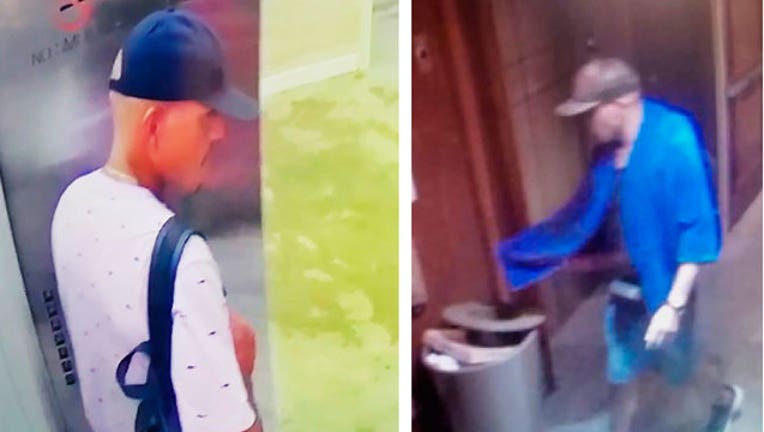 Two rooms were burglarized while guests were evacuated from one of the hotels, the 25-story Waikiki Beachcomber by Outrigger.  Surveillance video at the hotel showed a man carrying at least two backpacks similar to the ones taken in the burglary.

The fire, which broke out near a storage room on the 14th floor, caused $1.8 million in damage.

Police are asking for the public's help in identifying the man. Images showed him wearing a baseball hat, mustache and goatee.  No one was injured in the fires.

Each fire began at night in a hallway on a floor with guest rooms, said Honolulu Fire Department Captain Scot Seguirant.

Firefighters have referred the case to police for investigation.  Police wouldn't say if more officers were being sent to patrol the popular tourist area. An Associated Press request to interview Honolulu Police Chief Susan Ballard was declined.

The first fire caused $4,000 in damage Sunday at the Alohilani Resort.

The third fire broke out on the 28th floor of the 38-story Hilton Hawaiian Grand Waikikian on Tuesday.

Hotel security put out the flames with a fire extinguisher after it caused $10,000 in damage, police said.

Matt Kim of San Francisco, who is visiting the islands with his family, said he saw the road to the Grand Waikikian was closed Tuesday but had no idea there had been a case of arson.

He said he would like to see more foot patrols around the area but doesn't plan to change hotels unless officials recommend he do so.

Hilton spokesman Nigel Glennie said the resort doesn't publicly disclose security measures as a matter of policy. But he said the hotel has reviewed the incident and will make any appropriate changes.

Marc and Mariam Walkowski of Grand Rapids, Michigan, were sitting outside the Alohilani hotel on Wednesday, but didn't know there had been a case of arson there three days earlier.

The couple, who is staying on the 16th floor of a nearby Courtyard Marriott, had walked by the Waikiki Beachcomber by Outrigger on Monday.

"The streets were pretty flooded with tourists and people from the hotel," Marc Walkowski said. "It appeared that they evacuated nearly everybody."

People were taking photos and video and were calm, he said.

"There's a lot of hotels in this area so I'm not concerned that ours would be a target, but you never know," he said. "We weren't aware that it was arson, we assumed it was an accident."

His wife said they don't plan to do anything differently because of the fires. They'll be careful and not dwell too much on the negative.

"Obviously it's Hawaii and we're enjoying that," she said.