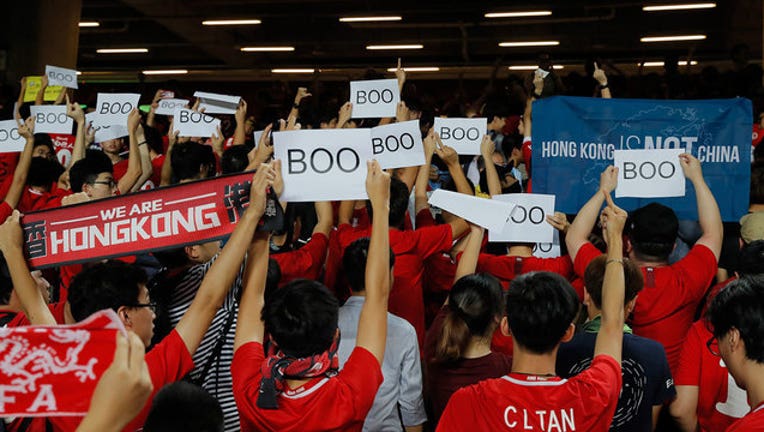 Hong Kong soccer fans turn their back and boo the Chinese national anthem as they chant "Hong Kong is not China" during a soccer match between Hong Kong and Iran, in Hong Kong, Tuesday, Sept. 10, 2019. (AP Photo/Kin Cheung)

HONG KONG (AP) - Thousands of Hong Kong soccer fans booed loudly and turned their backs when the Chinese national anthem was played before a World Cup qualifier match against Iran on Tuesday, taking the city's months of protests into the sports realm.

The crowd broke out into "Glory to Hong Kong," a song reflecting their campaign for more democratic freedoms in the semi-autonomous Chinese territory.

After the match started, fans chanted "Fight for freedom" and "Revolution of our Times." One person carried a blue poster that read, "Hong Kong is not China."

Hong Kong has been roiled by protests since June over an extradition bill that would have sent some residents to mainland China for trial. The government promised last week to withdraw the bill but that failed to placate the protesters, whose demands now include democratic reforms and police accountability.

Security at the Hong Kong Stadium was tight, with fans frisked to ensure they did not bring in political materials and other prohibited items. Iran, Asia's top team, had sought to move the match, citing safety concerns over the unrest, but the request was rejected by FIFA, soccer's governing body.

"Hong Kong people are united. We will speak up for freedom and democracy," one of the spectators, Leo Fan, said as members of the crowd continued to chant slogans and sing protest songs as they left.

Many see the extradition bill as a glaring example of the city's eroding autonomy since the former British colony returned to Chinese control in 1997. Clashes have become increasingly violent, with police firing tear gas after protesters vandalized subway stations, set street fires and blocked traffic over the weekend.

Hong Kong leader Carrie Lam renewed an appeal to protesters earlier Tuesday to "say no to violence" and engage in dialogue, as the city's richest man urged the government to provide a way out for the mostly young demonstrators.

Lam said the escalation of violence, in which more than 150 people including students have been detained in clashes since Friday, will deepen rifts and prolong the road to recovery.

She said her decision to formally withdraw the extradition bill and her other initiatives reflected her sincerity to heal society by initiating a direct dialogue with various communities, including protesters.

Billionaire Li Ka Shing, in a video broadcast on local TV, described the summer of unrest as the worst catastrophe since World War II. In his first public comments, Li called youths the "masters of our future" and said the government should temper justice with mercy in resolving the crisis.

"I am very worried. We hope Hong Kong people will be able to ride out the storm. We hope the young people can consider the big picture and those at the helm can give the masters of our future a way out," Li, 91, told a religious gathering outside a Buddhist temple over the weekend.

Asked about Li's comments, Lam agreed that the government "can do more and can do better" especially in meeting young people to hear their grievances.

But she stressed the government cannot condone violence and will strictly enforce the law.

The unrest has become the biggest challenge to Beijing's rule since it took over Hong Kong and is an embarrassment to its ruling Communist Party ahead of Oct. 1 celebrations of its 70th year in power. Beijing has slammed the protests as an effort by criminals to split the territory from China, backed by what it said were hostile foreigners.

Chinese foreign ministry spokeswoman Hua Chunying said Maas' "political show" with Wong displayed disrespect to China's sovereignty and was an interference in its internal affairs. She urged Germany to avoid sending the wrong signal to "radical, separatist forces in Hong Kong" and said any efforts to solicit foreign support to split the country are "doomed to fail."

In an immediate response, Wong tweeted that Chinese 's strong reaction was "baffling."

Wong, a leader of Hong Kong's 2014 pro-democracy protest movement, was charged last month with inciting people to join a protest in June. His prosecution came after his release from prison in June following a two-month sentence related to the 2014 protests.