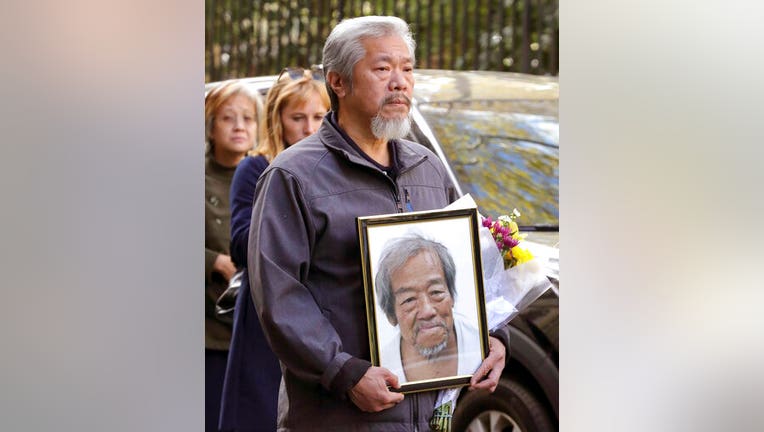 REMOVES REFERENCE TO HOMELESS KILLED - A mourner carries a photo of Chuen Kok after his funeral at the Ng Fook Funeral Home Friday Oct. 18, 2019, in New York. Kok, an 83-year-old homeless man whom Chinatown residents warmly greeted as "uncle," was on

NEW YORK (AP) — They were figures in Chinatown's street scene: the homeless octogenarian whom residents respectfully greeted as "uncle." The itinerant preacher and blogger who tapped out posts on his laptop in a park. And the man who had a home and family on Staten Island but liked to spend time with friends in Chinatown.

Everyday threads in the fabric of a vibrant urban neighborhood, they were ripped out by brutality. They and another man, about whom little is known, were beaten to death after being attacked in their sleep.

The Oct. 5 killings have trained scrutiny on the city's struggle to reduce homelessness, but they also have spotlighted a certain sense of community. After a vigil for all of the victims last week, dozens of people paid respects Thursday to Chuen Kok, 83, at a memorial service arranged by area residents.

"A lot of people who saw him every day cared about him," said Kim Mui, one of those who brought him food, offered him money and encouraged him to go to shelters over the years.

Kok and three others — Anthony Manson, Florencio Moran and Nazario Vásquez Villegas — were bludgeoned to death with a metal pipe as they slept on streets around a Chinatown square a few blocks from City Hall, police said. A fifth man was critically injured.

Randy Santos, 24, has been charged with murder. He hasn't entered a plea, and his lawyer has declined to comment.

Santos and some of the victims were part of a New York City homeless population that includes over 60,000 people in shelters and likely thousands more on streets, subways and other public spots. A January count found nearly 3,600 unsheltered homeless people, down about 8% in two years but still above average for the decade. Advocates for the homeless have long questioned the reliability of the annual one-night survey.

After the killings, Democratic Mayor Bill de Blasio defended the city's efforts to combat homelessness and said homeless-outreach forays and security measures would increase in Chinatown.

Kok, sometimes spelled Kwok, had been an unassuming presence for years on the neighborhood's bustling streets — the slight, bearded man who slept in a storefront doorway, never requesting but sometimes accepting a blanket, a few dollars or a roast pork bun from a passer-by, residents say.

After coming to the U.S. from Hong Kong decades ago, Kok worked in restaurants and selling fish, and he lived with his wife in an apartment, people who knew him say. The two were very close, and he was devoted to her, said the Rev. Billy Yip, the pastor of a now-closed non-denominational church Kok attended.

After Kok's wife died about 15 years ago, he found himself aging, struggling and without any relatives nearby. Church members tried to help couldn't "really get him out of his situation," Yip said.

One cold day last winter, Kok went to a local shelter, recalled church member Manni Lee, who accompanied him. But he left within months.

"It's not really the best for me," he told Lee when she saw him back on the streets in spring. He didn't elaborate, or complain.

Mui and friend Shirley Ng tried last month to persuade him to head to a shelter, writing out an English-language note for the Cantonese speaker to explain that he needed a place to stay, the women recalled.

He was still in his doorway, bundled in a jacket, when Yip passed by Oct. 4. The pastor remembers pressing some money into Kok's hand and Kok meeting his eye with the recognition of a friend.

"He always used kindness to face the harsh reality, his genuineness to deal with a difficult life," Yip said.

Manson was also a familiar face in Chinatown. He could be seen with his laptop propped on a chess table in a park a couple of blocks from Kok's doorway, working on material for the blog he kept as "Anthony the priestly artist."

On the blog and in videos he posted on social media, the 49-year-old discussed scripture and psychology, praised children's hospitals, urged people to help hurricane victims and offered ideas about social issues from water conservation to homelessness.

A pair of February 2017 blog posts aimed to make homelessness "more visible to everyone who see, but don't really see."

"I hope I can rally your support for all those who work for and with the homeless and that we can walk away civilly with more of a deep understanding of this issue, without the finger pointing," he explained.

Originally from Chicago, the 49-year-old had traveled the country to preach, working to help establish a Pentecostal church about two decades ago in the small city of Kosciusko, Mississippi, said Bertha Levy, who knew him there. She said she later cared for one of his two sons after Manson and his then-wife hit hard times, and he moved to California in search of better prospects.

In recent years, Manson had traveled among New York, Denver and the Los Angeles area, according to his online videos and to Karlin Chan, a Chinatown community activist who'd converse with Manson periodically about his various interests.

Manson's brother told The New York Times his family didn't know he was homeless and in New York.

Vásquez Villegas, 55, had a home to go to on Staten Island, where the Mexican-born man was a father and grandfather in a big family, and he had a job as a factory worker, relatives told reporters.

A congenial man, he made lots of friends, his family said. He liked to shoot the breeze with pals on a Chinatown corner, apparently fell asleep there, and just "was in the wrong place and at the wrong time," said his daughter Guadelupe.

"My father was a lovely man who always worked for us and loved us very much," she said.

It took nearly two weeks for authorities to identify Moran, 39, who had no known address. No one immediately responded to messages left for possible relatives.