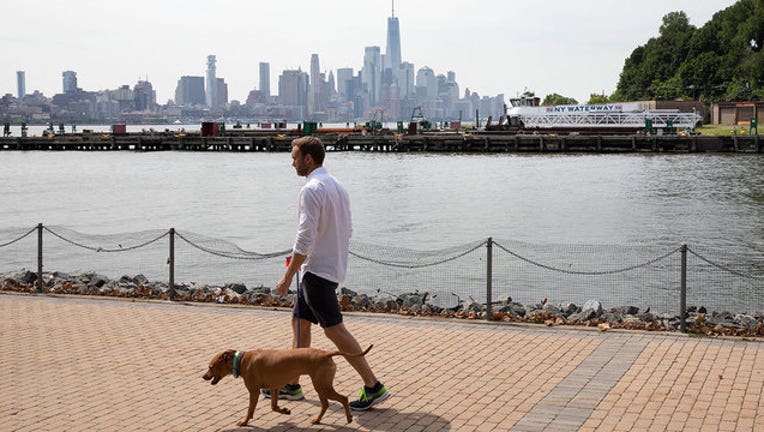 In this Monday, Aug. 5, 2019 photo, a man walks his dog in Maxwell Place Park which borders a property owned by NY Waterway ferry company in Hoboken, N.J. The Manhattan skyline is across the Hudson River in the distance. (AP Photo/Mark Lennihan)

HOBOKEN, N.J. (AP) - The battle over the future of a coveted slice of Hudson River waterfront is being rekindled, presaging what could be a long and costly legal fight.

The currently unused three-acre parcel with a picture-postcard view of the Manhattan skyline was part of land once bought by Dutchman Peter Stuyvesant in the 1600s from the Lenni Lenape tribe for wampum, kettles, guns and beer. It was later a shipping hub and served as a port of embarkation for World War I troops.

For more than a century it served as a maintenance depot for boats traversing the Hudson. Its owner, ferry company NY Waterway, wants to use it for that purpose again, while the city of Hoboken wants to convert it to green space to complete its waterfront park system.

Hoboken's city council is scheduled to vote Wednesday night on whether to authorize Mayor Ravi Bhalla to make a $13 million offer to buy the land and, if NY Waterway declines the offer, commence eminent domain proceedings to seize it. A second vote will have to be taken in September before any action is taken.

Bhalla, who is in his second year in office leading the city of roughly 55,000, seemed unconcerned about the potential for a lengthy and expensive battle, and chose instead to view the fight in a broader context.

"This generation of Hobokenites is just one of a number of generations that have fought longstanding battles to preserve the waterfront as public space," Bhalla said. "I view us as simply a new generation of residents who are working toward that mission."

A sense of deja vu hangs over Wednesday's vote.

Last year, the council authorized the use of eminent domain but stood down after Democratic Gov. Phil Murphy nixed a deal struck by his predecessor, Republican Gov. Chris Christie, that would have blocked Hoboken's attempts by having the state's transit agency buy the land from NY Waterway and lease it back to the ferry company.

Bhalla has said he hasn't heard from Murphy on the issue in several months. Murphy was scheduled to return from vacation Wednesday, and his office didn't respond to a request for comment Tuesday.

The cost to the city could be considerable. NY Waterway is expected to dispute the amount being offered as well as whether the city has a legitimate purpose to take the land at all. Its ferries carry about 30,000 people per day across the river, and regularly serve as a safety valve when train service is disrupted.

Through a spokesman, NY Waterway declined comment this week.

The city could see the purchase price rise if it goes to court, said William Ward, a New Jersey-based attorney specializing in eminent domain cases. Ward represented a property owner in Jersey City who had initially been offered $1.2 million by the city's redevelopment authority but went to court and wound up being awarded $18 million in 2008.

"My feeling is it's a waste of money for Hoboken to buy this for open space," Ward said last week. "And if they file an eminent domain action, they're opening themselves up to get hit with a big verdict."

There also is the question of whether the city would have to pay relocation costs to NY Waterway, which currently services its ferries farther north in Weehawken but has said it has to vacate that location.

Bhalla said the city's attorneys have told him Hoboken's exposure is limited because the land isn't currently in use. Meanwhile, a study on other potential sites by New Jersey Transit, the state agency that was to have bought the land under Christie's plan, was to have been completed last fall but is only now nearing completion, according to a spokeswoman.

Remediating any environmental hazards also could prompt another court fight over who is responsible for paying.

Councilman Michael DeFusco, who finished second in the mayor's race to Bhalla in 2017, said he supports the park plan but sounded a note of caution.