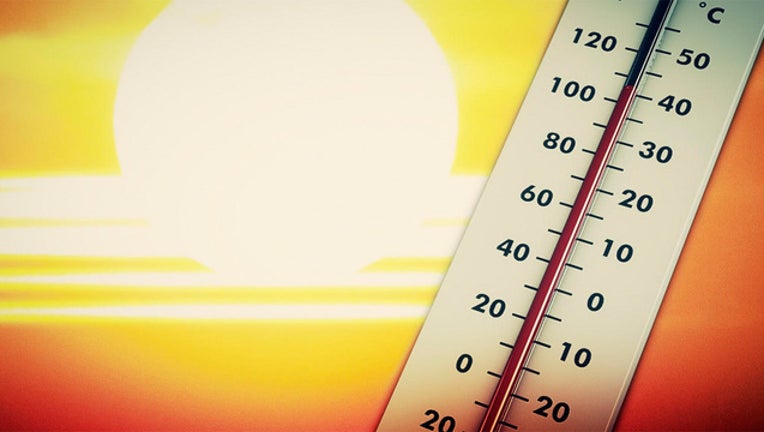 BOSTON (AP) - The East Coast on Sunday sweated through another day of heat and humidity in a stretch of weather so oppressive that a New Jersey drawbridge got stuck, Pennsylvania firefighters suffered from heat exhaustion and police departments from New York City to suburban Boston implored residents - and criminals - to play it safe.

"Sunday has been canceled," the NYPD jokingly tweeted . "Stay indoors, nothing to see here. Really, we got this."

The central part of the country, meanwhile, enjoyed some relief as a cold front moved steadily southward and eastward across the country, bringing down the temperatures. But the cooler weather settling in Monday and Tuesday will also bring severe storms and heavy rain that could cause flash flooding and produce damaging winds, the National Weather Service warned.

The Carolinas up to Maine were expected to see the highest temperatures Sunday. Daytime highs were expected in the mid-to-upper 90s, which, coupled with high humidity, could feel as hot as 110 degrees Fahrenheit (43 degrees Celsius).

Boston again opened up city pools free to residents as the temperature cracked 90 degrees (32 degrees Celsius) for the third consecutive day by noon Sunday. Police in one suburb also posted a tongue-in-cheek request on their Facebook page.

In New York City, where all eyes were on the power grid even before the hot weather following a Manhattan blackout last weekend, electricity company Con Ed reported scattered outages Sunday, the vast majority in the borough of Queens.

The city also directed office buildings to set thermostats no lower than 78 degrees (26 degrees Celsius) through Sunday to reduce strain on its electrical grid.

In Philadelphia, several hundred people were evacuated from a retirement community Saturday because of a partial power outage that officials say may have been heat-related.

Elsewhere in Pennsylvania, nine firefighters were treated for heat exhaustion and six transported to a hospital for treatment while fighting a house fire in sweltering conditions. The Strinestown Fire Company said all of the firefighters were released by the time Saturday's Conewago Township blaze was extinguished.

In New Hampshire, rescue crews helped rescue a 29-year-old hiker late Saturday after he was overcome by the heat in the White Mountain National Forest.

In New Jersey, the Oceanic Bridge over the Navesink River was closed Saturday evening after it got stuck open. Monmouth County officials say heat caused expansion of the metal encasing the drawbridge, which is a popular route for residents and beachgoers.

The heat prompted Delaware officials to close Fort Delaware State Park for the weekend. Temperatures were too much for costumed interpreters who wear Civil War-era clothes made from wool. Officials cited safety concerns for staff, volunteers and guests. The park's Pea Patch Island, which served as a Union prison camp during the war, has limited air conditioning, and transportation from the island can present difficulties for a person who has a heat-related emergency, the Delaware Department of Natural Resources and Environmental Control said.

The heat wave is starting to break in the northern reaches of New England.

But a heat advisory remains in effect Sunday for southern sections of Vermont, New Hampshire and Maine, where heat indexes could still top 100 degrees.

And in many parts of the country, it's not expected to get much better when the sun goes down. Temperatures are expected to remain at or above the high 70s overnight (26 degrees Celsius).

Experts have warned residents in affected areas to limit their time outdoors. The risks are greatest for young children, the elderly and the sick.

Inland, strong wind and rain were expected to persist Sunday in the Midwest, and a cold front stretching between the Central Plains and the Great Lakes region is forecast to move south. But in addition to lower temperatures, the cold front is expected to carry showers and thunderstorms, which could lead to heavy rainfall and flash flooding in the Midwest.

Storms already knocked out power to hundreds of thousands of residents in Michigan and Wisconsin Saturday.

The heat wave also canceled or delayed events across the affected region Saturday, from horse races in Maryland, New Jersey and upstate New York to a 5K run in Chicago's Grant Park.

In New York City, a commemoration of the 1969 moon landing planned for Times Square and an outdoor festival featuring soccer star Megan Rapinoe and musician John Legend were also nixed due to the heat.