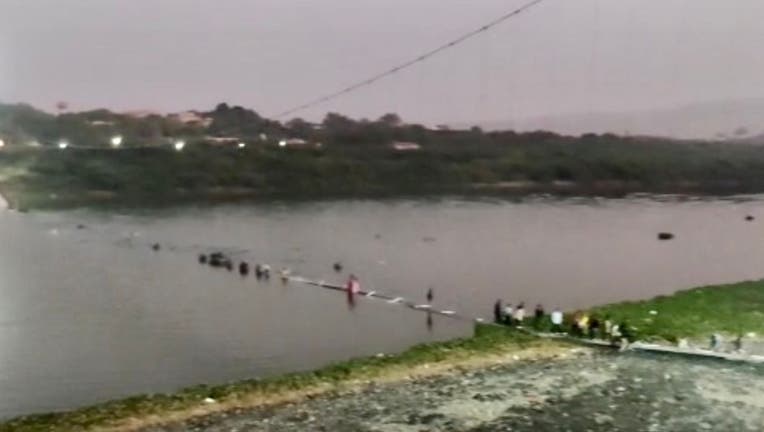 A view of the site after a suspension bridge collapses in Indiaâs Gujarat state on October 30, 2022. Hundreds plunged into river after the bridge collapsed. (Photo by Stringer/Anadolu Agency via Getty Images)

Military teams were searching Monday for people missing after a century-old cable suspension bridge collapsed into a river Sunday in the western Indian state of Gujarat, sending hundreds plunging into the water and killing at least 133 in one of the country's worst accidents in years.

As families mourned the dead, attention was turning to why the bridge, built by the British in the late 1800s and touted as an "engineering marvel," collapsed and who might be responsible.

The local government had awarded a 15-year contract to maintain and manage the bridge to a Morbi-based company, Ajanta Manufacturing Pvt. Ltd., mainly known for making clocks, mosquito racquets and electric bikes.

It reopened the bridge, which spans a wide section of the Machchu river, on Oct. 26. That's the first day of the Gujarati New Year, which coincides with the Hindu festival season, and the newly reopened attraction drew hundreds of sightseers.

Sandeepsinh Zala, a Morbi city official, told the Indian Express newspaper the company had reopened the bridge without first obtaining a "fitness certificate." That claim could not be independently verified, but the state government said it had formed a special team to investigate the disaster.

Authorities said the structure collapsed under the weight of hundreds of people. Security footage of the disaster showed bridge shaking violently and people trying to keep hold of its cables and green-colored metal fencing before the aluminum walkway gave way and crashed into the river.

Visuals from the disaster site showed the bridge split in the middle and the metal walkway hanging down, its cables snapped in places. At least 177 survivors were pulled from the river and teams from the army, navy and air force were looking for others still missing, said Jigar Khunt, an information department official in Gujarat. 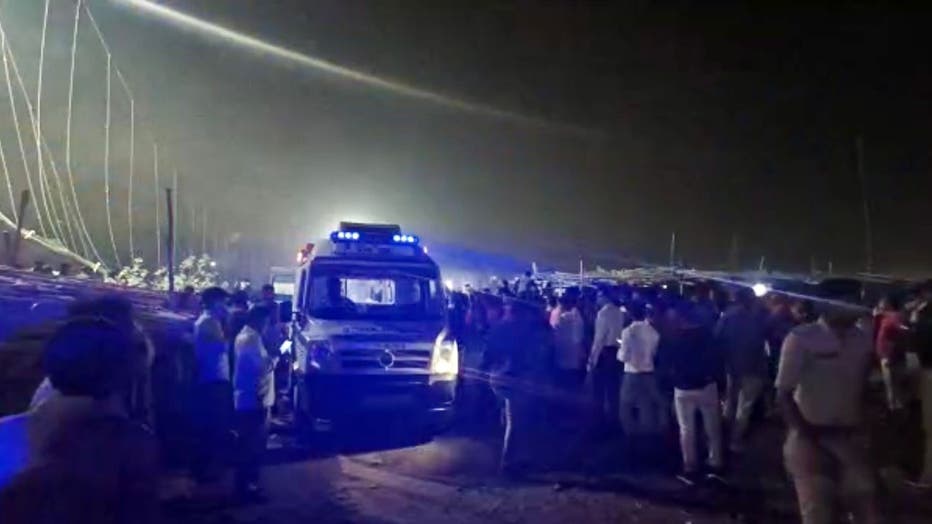 A view of the site after a suspension bridge collapses in Indiaâs Gujarat state on October 30, 2022. Hundreds plunged into river after the bridge collapsed. (Photo by Stringer/Anadolu Agency via Getty Images)

State minister Harsh Sanghvi told reporters that 133 people were confirmed dead and many others were admitted to hospitals in critical condition. Emergency responders and rescuers worked overnight to search for the survivors. Most of the victims were teens, women and older people, he said.

It was not immediately clear exactly how many people were on the bridge when it collapsed but survivors said it was so densely packed that the crowd was unable to quickly move to safety when its cable began to snap.

"There were just too many people on the bridge. We could barely move," Sidik Bai, 27, said while recovering from injuries in a hospital bed in Morbi.

Sidik said he jumped into the water when the bridge began to crack and saw his friend being crushed by its metal walkway. He survived by clinging to the bridge's cables, but his friend didn't make it.

"Everyone was crying for help, but one by one they all began disappearing in the water," Sidik said.

Local news channels ran pictures of the missing shared by concerned relatives and family members raced to overcrowded hospitals searching for their loved ones.

Prime Minister Narendra Modi, visiting his home state of Gujarat, said he was "deeply saddened by the tragedy." His office announced compensation for families of the dead and called for speedy rescue efforts.

"Rarely in my life, would I have experienced such pain," Modi said during a public event in the state on Monday.

Modi was the top elected official of Gujarat for 12 years before becoming India’s prime minister in 2014. A Gujarat state government election is expected in coming months and opposition parties have demanded an investigation into the collapse.

On Saturday, a Halloween crowd surge killed more than 150 mostly young people who attended festivities in Itaewon, a neighborhood in Seoul, South Korea. On Oct. 1, police in Indonesia fired tear gas at a soccer match, causing a crush that killed 132 people as spectators tried to flee.

India’s infrastructure has long been marred by safety concerns, and Mordi has suffered other major disasters. In 1979, an upstream dam on the Machchu river burst, sending walls of water into the city and killing hundreds of people in one of India's biggest dam failures.

In 2001, thousands of people died in an earthquake in Gujarat. Morbi town, 85 miles (150 km) from the quake's epicenter in Bhuj, suffered widespread damage. According to a report in the Times of India newspaper, the bridge that collapsed Sunday also was severely damaged.