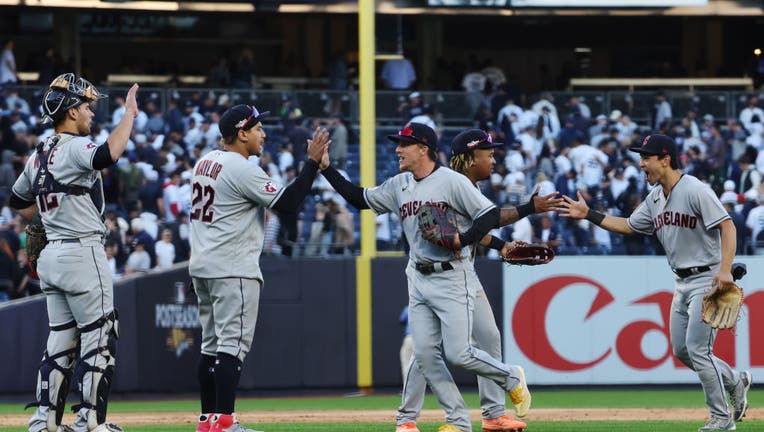 NEW YORK - Oscar Gonzalez singled in the go-ahead run with Cleveland’s second straight bloop hit in the 10th inning, and the Guardians overcame a two-run deficit to beat the New York Yankees 4-2 Friday and even their best-of-five AL Division Series at one game apiece.

José Ramírez led off the 10th against Jameson Taillon with an opposite-field popup that dropped 200 feet from home plate, just in front of left fielder Oswaldo Cabrera for a double. Ramírez hustled all the way and slid into third headfirst when third baseman Josh Donaldson threw the ball past second for an error.

Gonzalez, whose 15th-inning homer Saturday completed a first-round sweep of Tampa Bay in the wild-card round, followed with a 59 mph, 164-foot opposite-field flare into short right off Taillon, who made his first big league relief appearance after 143 starts. Josh Naylor added an RBI double that bounced on a hop off the wall in right-center.

"We just try find a way on base," Naylor said. "If it’s a bloop hit, it’s a bloop hit. If it’s a hard-hit single, double, whatever the case it, we just try to hustle. try to make things happen on the field, try to put pressure on the defense."

Winner Emmanuel Clase pitched 2 1/3 innings, his most in the major leagues, and combined with Trevor Stephan and Karinchak for 4 1/3 innings of one-hit relief as Cleveland stopped a six-game postseason losing streak to the Yankees.

Clase retired Kyle Higashioka on a lineout to Ramírez for the final out of the eighth after James Karinchak walked the bases loaded. Clase threw 33 pitches, 10 more than his season high.

"It was preparing mentally and remembering when I was a starter in the minor leagues and try to do the same thing," Clase said through a translator.

The series shifts to Cleveland for Game 3 on Saturday night. There is no travel day because a rainout Thursday had pushed Game 2 to Friday.

Giancarlo Stanton hit a two-run homer in the first inning, and Cleveland tied the score against All-Star Nestor Cortes when Andrés Giménez had an RBI single in the fourth and Amed Rosario homered in the fifth.

Aaron Judge went 0 for 5 with four strikeouts and dropped to 0 for 8 with seven strikeouts and a walk in the series. Fresh off setting the AL home run record with 62, he was booed by some fans in the sellout crowd of 47,355 after whiffing against Stephan in the seventh.

Judge is 2 for 37 with 27 strikeouts against Cleveland in three playoff series, including all four of his four-strikeout postseason games.

Cortes saved two runs in the fourth with an acrobatic leap and throw to first from a sitting position on Myles Straw’s two-out, bases-loaded comebacker.

After rain caused a postponement Thursday night, the game was rescheduled for 1:07 p.m., the first early afternoon postseason start in the Bronx since Game 2 of the 2006 Division Series against Detroit. Shadows crept across the field from the first-base side in the middle innings on a cloudless afternoon, reminiscent of so many World Series games at old Yankee Stadium in the 1940s and ’50s.

Stanton had started to first in the opening inning on a 3-1 cutter that appeared low but was called a strike by plate umpire Jeremie Rehak. With Stanton back in the batter’s box, catcher Austin Hedges set up on the low, outside corner but Shane Bieber left a 93 fastball up. Stanton drove it to the opposite field and into the right-field seats for his 10th homer in 20 postseason games.

Two years ago, Bieber allowed a two-run homer in the first to Judge in the wild-card opener, a 12-3 Yankees win.

Cleveland had been 0 for 12 with runners in scoring position during the postseason before Giménez hit a soft single into right field with two on in the fourth that drove in Naylor. Hedges walked for the second time, loading the bases.

Straw followed with a one-hop smash and Cortes, falling off the third-base side of the mound, extended his glove hand to snag the ball as he hit the mound with his head toward first. He sat up, learned back and made a one-hop throw to first baseman Anthony Rizzo, who scooped the ball for the out. Cortes slapped his bare hand against his glove five times while running off the field.

Rosario tied the score in the fifth driving the ball into the Yankees bullpen when Cortes left a fastball over the plate.

Bieber gave up two runs and five hits in 5 2/3 innings.

New York’s Matt Carpenter returned from a broken left foot that had sidelined him since Aug. 8. He pinch hit against Stephan with two on and two outs in the sixth, and he struck out.

RHP Luis Severino (7-3, 3.18) makes his first postseason start for the Yankees since 2019 and RHP Triston McKenzie (11-11, 2.96) will be on the mound for the Guardians after pitching six scoreless innings in Game 2 against Tampa Bay. Severino pitched seven no-hit innings at Texas in his last regular-season start.