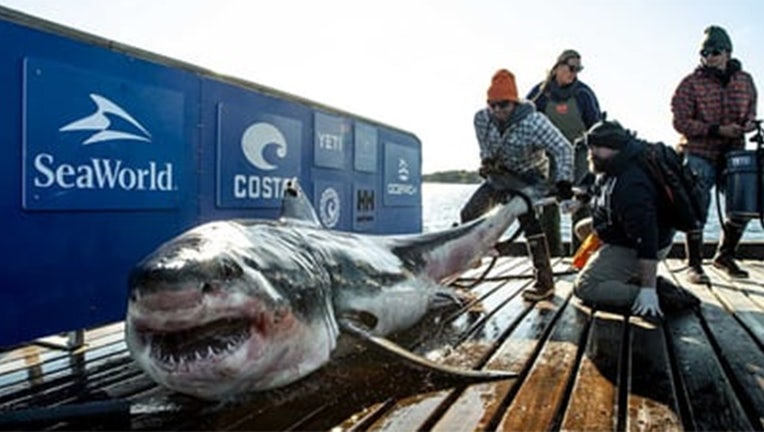 A file image from OCEARCH shows Ironbound after he was tagged.

OCEARCH, which tracks several tagged sharks, reported the shark off of New Jersey on April 28, 2022.  It has raced back south and was pinned off of the Outer Banks of North Carolina on Monday.

Ironbound is named after West Ironbound Island near Lunenburg, Nova Scotia.  He is a 12'4" adult male that was tagged in Lunenburg in 2019.  Ironbound has traveled more than 13,000 miles since then.

Over the past 9 years, OCEARCH has tagged 83 sharks in the waters off of the East Coast.

While Ironbound might sound like a big shark, OCEARCH tagged and followed a 16-foot, 3,456-pound female Great White Shark named Mary Lee from 2012 to 2017 up and down the East Coast.  She was last pinged on June 17, 2017, in the waters off of South Jersey.

A nearly 900-pound great white shark was spotted swimming near the Jersey Shore and Long Island last June. OCEARCH says that the 11-foot-long young female named Freya pinged off of the coast of Atlantic City.

Beaches in Nassau County will fly a purple flag with a white silhouette to indicate shark sightings.