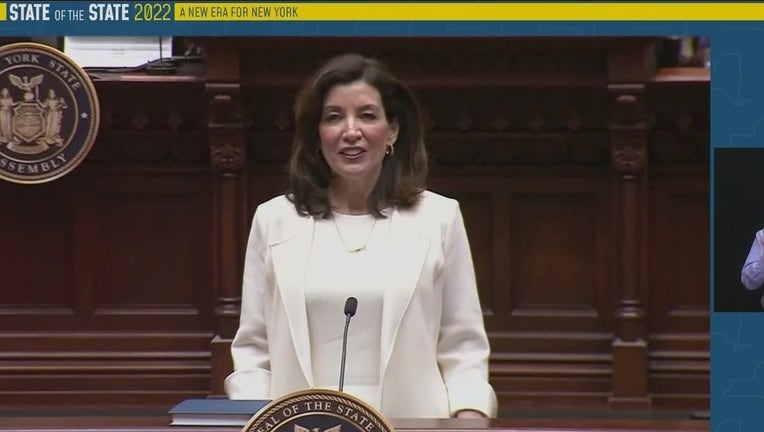 NEW YORK - Governor Kathy Hochul’s overall job performance rating plunged last month to the lowest it has ever been to 36%, according to a new Siena College Research poll.

Hochul also received a negative job performance rating on five specific categories, with crime being the worst. 69% of New Yorkers believe Hochul is doing a bad job at handling crime and 63% say she is not doing a good job with economic issues, pointing to inflation and taxes.

"One bright spot in this month’s numbers for Hochul is her favorability rating, which remains consistent – between 42% and 46% positive every month since September – and positive," Siena College pollster Steven Greenberg said. "Among Democrats, her favorability rating is 60-16%, far better than her primary opponents."

When it comes to crime though, 67% of voters support the Legislature’s decision to amend the state’s bail laws first passed in 2019. The recent changes allow judges to set bail for repeat offenders and certain gun charges.

"While the original bail reform law is still viewed as bad for the state, 54-34%, down a little from 56-30% last month, that largely depends on which side of the aisle you sit on," Greenberg said. "The overwhelming majority of Republicans and independents continue to say the law has been bad for the state, and Democrats, by a narrower but growing margin say the law has been good for New York."

But according to this recent poll, crime and economic issues are the two main factors that could drive this next election.

"One-quarter of voters say that crime will be the single most important issue in determining which candidate gets their support for governor in November," Greenberg said. "While taxes/fiscal responsibility finished a distant second, identified by 9%, all economic issues combined – including jobs, inflation, and the cost of living – are also identified by one-quarter of voters as the most important issue."

A majority of voters also say the state is headed in the wrong direction, growing from last month, to 52-36% compared to 49-40% in March.

New Yorkers did overwhelming approve of reducing the gas tax with two thirds of voters approving of the state suspending its share of the gas tax between June and December.

But voters strongly disapproved of the deal struck by Hochul to have taxpayers pay $600 million for a new Buffalo Bills Stadium, with 55% of every demographic group opposing the deal.

"Interestingly, upstaters are even less approving than downstaters of the stadium deal and are also less supportive of three New York City area casinos," Greenberg said.

When it comes to Republicans running for Governor, Andrew Giuliani continues to lead, but Greenberg points out that the name recognition among other candidates is incredibly lower.

The poll was conducted April 18-21, 2022, among 806 New York State registered voters. It has an overall margin of error of + 3.9 percentage points including the design effects resulting from weighting.