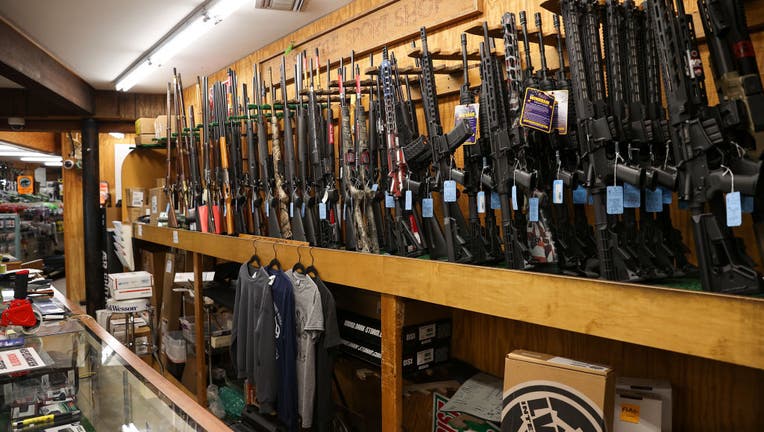 Fire arms are seen at the Bobâs Little Sport Gun Shop in the town of Glassboro, New Jersey, United States on May 26, 2022. (Photo by Tayfun Coskun/Anadolu Agency via Getty Images)

SCOTCH PLAINS, N.J. - New Jersey Gov. Phil Murphy on Thursday signed an overhaul to the rules to get a firearm carry permit, legislation that was spurred by this summer’s U.S. Supreme Court ruling expanding gun rights.

"While we are bound to follow the Supreme Court’s ruling, we are also obligated to do everything we can to make sure guns don’t proliferate," Murphy, a Democrat, said before signing the measure during a ceremony in Scotch Plains.

According to Bloomberg, the law is already being challenged by a gun-rights group who say it violates the Second Amendment.

The Democrat-led Senate had passed the measure Monday, sending it to Murphy's desk. Republicans had opposed the legislation, raising questions about its constitutionality, and gun rights advocates predicted it wouldn’t pass constitutional muster.

"By signing this legislation, Gov. Murphy has effectively ended any chance of ever being elected to higher office outside of New Jersey, and has confirmed that the Constitution is indeed ‘above his pay grade,'" said Scott Bach, the head of the Association of New Jersey Rifle and Pistol Clubs,

The legislation scraps New Jersey’s current requirement that those seeking a permit to carry a firearm show "justifiable need" and be of "good character" to reflect the Supreme Court’s June ruling. Other changes in the legislation include disqualifications for those who have been confined over their mental health, people who have had restraining orders as any "fugitive from justice."

The measure also calls for the end of a paper permitting system that used quadruplicate documents to register applicants. It also would establish a yet-to-be created online gun sales portal.

It increases from three to four the number of endorsements from non-family members in order to get a permit. They would also have to be interviewed by law enforcement officials as well.

According to Bloomberg, the law is already being challenged by a gun-rights group who say the law violates the