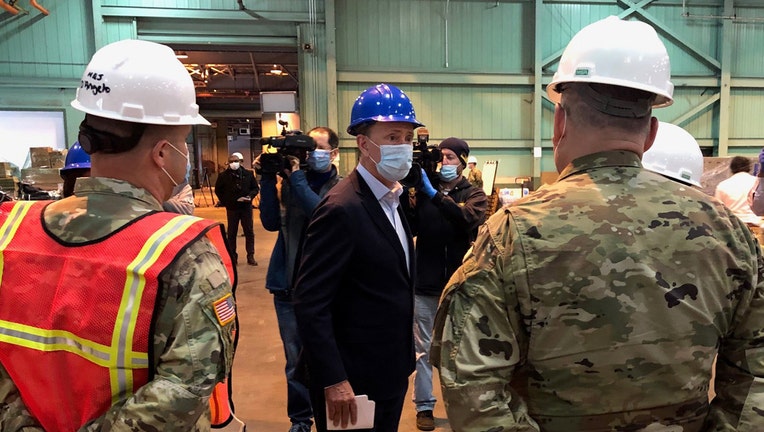 HARTFORD, Conn. (AP) - Gov. Ned Lamont made an example of himself Tuesday, getting screened for the coronavirus as Connecticut looks to significantly increase testing before it begins the planned reopening of the economy on May 20.

The governor, who did not immediately receive his test results, said the state has increased testing from about 18,000 per week two weeks ago to about 29,000 per week.

He expects more than 42,000 tests will be conducted next week, giving the state a much better idea of how the virus has spread in the community.

Lamont said the state is moving to quickly test all residents and workers at nursing homes and significantly ramp up testing in the state's prisons and among first responders.

For most people, the virus causes mild or moderate symptoms, such as fever and cough, that clear up in two to three weeks. For some, especially older adults and people with existing health problems, it can cause more severe illness or death.

In other coronavirus related developments around Connecticut:

Lamont announced Tuesday that he had replaced the state's public health commissioner in the middle of the coronavirus pandemic.

Coleman-Mitchell, in a statement released by her attorney, Eric Brown, said she was told by the governor's office that Lamont's decision was not related to her job performance.

"I am proud of the work of the Department of Public Health during this time of unprecedented turmoil and threat to the public health," the statement said. "Our coordinated response to the COVID-19 public health crisis earned praise from public health experts around the country. Our citizens have uniformly praised our efforts to keep communities safe."

Brown said Coleman-Mitchell is trying to work with the governor's office on a departure compensation package and there has been no determination on whether to legally challenge the firing.

Lamont did not get into specifics about the firing when asked about it by reporters during a visit Tuesday to a warehouse that had received a shipment of personal protective equipment.

"I just had to make a decision. I thought this was a good time to make a change," Lamont said. "I think the job has changed, let me put it that way, and ... in terms of public health long term, I wanted closer coordination between our different departments, starting with Social Services."

Coleman-Mitchell had been criticized for being slow to act on a plan to protect nursing homes from COVID-19.

The governor on Tuesday showed off the state's largest single shipment of personal protective equipment to help frontline workers in the fight against COVID-19.

Lamont said the supplies are being sorted to be sent out to first responders, hospital staff, nursing homes workers and others.

The governor said the state has delivered over 15 million pieces of protective equipment to front-line workers.

At least five children in Connecticut were being treated Tuesday for a dangerous inflammatory condition linked to the coronavirus outbreak.

Dr. Juan Salazar, the physician-in-chief at Connecticut Children's Medical Center, said two patients there are believed to have the rare condition, which mirrors Kawasaki disease, affecting the blood vessels and organs.

Tests are being conducted on a third child who may be suffering from either the new syndrome or traditional Kawasaki, Salazar said.

Yale Health has said it is treating three children with symptoms believed to be caused by the syndrome, which has been linked to several deaths in New York.

Salazar said little is known about the condition, which appears to present itself about two to four weeks after a child has recovered from COVID-19 — often without ever being diagnosed with a coronavirus infection.

"This is still a rare complication of COVID-19," he said. "It's not something every parent should be panicking about."

Salazar, an infectious disease and immunology specialist, said health officials are still waiting for the CDC to come up with a specific case definition for the syndrome. He said the hospital also is working with The Jackson Laboratory in Connecticut to help identify biological markers that can help diagnose the condition.