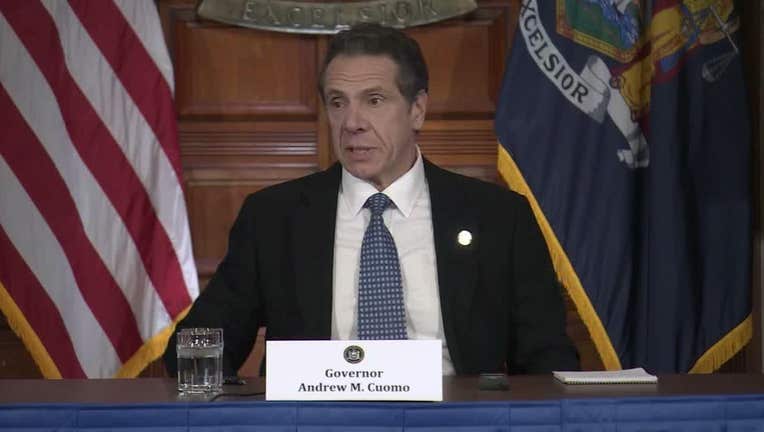 NEW YORK - Before President Donald Trump stepped into the White House briefing room on Thursday to provide an update on the coronavirus, an opening act was broadcast across cable news of another chief executive calmly reciting statistics and safety tips.

For the second straight day, New York Gov. Andrew Cuomo's matter-of-fact and slightly scolding demeanor from an epicenter of the pandemic was a stark contrast to the often haphazard and hyperbolic messages coming from Trump.

“I tell my daughters: Make decisions based on risk versus reward,” the Democrat said at his Thursday briefing. “For young people to go out in crowds on spring break is so unintelligent and reckless, I can't even begin to express it. Stay home. Stop the spread. Save lives.”

Through daily briefings and scores of media appearances, Cuomo has emerged as one of the key faces responding to the pandemic. He is one of several governors thrust into the spotlight as cases surge, forcing a reordering of American life without schools, sporting events or large crowds. The decisions to cancel events and help overburdened hospitals have often fallen to governors, like Ohio’s Mike DeWine, a Republican, who postponed the state’s primary this week, and Michigan’s Gretchen Whitmer, a Democrat, who drew Trump’s ire for criticizing the federal response.

Gov. Cuomo says we are battling the virus and fear.

But it has been Cuomo’s daily briefings that have become must-see TV. Twice this week, the White House’s own coronavirus briefing was delayed until Cuomo concluded his own update, providing vital information to a public largely shut in at home, televisions anxiously tuned to cable news.

His appearances drew praise from some unlikely sources.

“I continue to be impressed with the briefings given by @realDonaldTrump and his world-class experts,” tweeted Rudy Giuliani, the president’s personal attorney. “Similarly, my Governor, Andrew Cuomo who is keeping us well informed.”

Meanwhile, an unexpected online fan club has popped up, full of adoring Twitter posts during the governor’s briefings and one Jezebel article Thursday titled “Help, I Think I'm In Love With Andrew Cuomo???”

It’s a remarkable show of affection for a governor who has long been more respected than loved, one who is in his third term in an overwhelmingly Democratic state yet has never been embraced by the party’s liberal base, who at times have grown frustrated with his centrist approach. He has twice toyed with running for president but never launched a campaign.

Still, his very public tactics have positioned him as the Democratic counter to Trump even as the party begins to coalesce around Joe Biden's presidential campaign. Biden, who has a nearly insurmountable delegate lead in the Democratic contest, has largely kept a low profile limited to short speeches, remarks and other events livestreamed to supporters who are being advised to stay home for the foreseeable future.

As Cuomo conducts briefings from the state capital in Albany, he has vacillated between being Trump’s foil and his unlikely ally. The two Queens natives have traded barbs on Twitter while also conferring in late-night phone calls placed from the White House residence.

"Just had a very good tele-conference with Nation's Governors. Went very well. Cuomo of New York has to ‘do more,’'' Trump tweeted Monday.

A short time later, Cuomo responded: "I have to do more? No -- YOU have to do something! You're supposed to be the President."

But the two men spoke several times the next few days and Cuomo made a point, in national television interviews, of expressing his appreciation for Trump’s responsiveness even as he urged the federal government to do more.

“The best news is, I think the federal government has now really gotten this and they're engaged,” Cuomo said Thursday on MSNBC’s “Morning Joe.” “I said to the president, you step up, you help my state, you help my people, you help this country, and I will put my hand out in partnership 100% because politics be darned right now, right?”

The president, hours later from the White House briefing room, noted the comment, saying, “Andrew Cuomo is being very, very generous, saying such nice things about us.”

Cuomo has steered his state through crisis before, including the devastation wrought by Superstorm Sandy in 2012. He has long been drawn to proposing sweeping government projects and taking a hands-on approach to emergency responses. He worked for his father, three-term Gov. Mario Cuomo, and oversaw the response to numerous disasters as secretary of housing and urban development for President Bill Clinton.

He long has feuded with New York City Mayor Bill de Blasio, a fellow Democrat who once worked for Cuomo at HUD. Ruthless when wielding political power, Cuomo has at times appeared to quash de Blasio's policy proposals out of sport, and the two men have continued their rivalry during the coronavirus crisis.

Cuomo upstaged and undermined de Blasio by ordering the city's schools to close mere minutes before the mayor was set to make the announcement, and, this week, the governor took pains to rebut the mayor's plan for the nation's largest city to shelter in place during the worst of the outbreak.

Cuomo's performance this week, to some, echoed how another polarizing New York politician commanded the national stage when the commander-in-chief was missing in action.

Giuliani, then mayor of New York City, was the face of American grief and resolve on Sept. 11, 2001, when President George W. Bush was being scrambled to safety on Air Force One in the hours after the terror attacks. Cuomo’s leadership this week has been reminiscent of Giuliani in that moment of American worry, according to George Arzt, a New York Democratic consultant who was Mayor Ed Koch’s press secretary and has worked with both Cuomo and Trump.

“People are yearning for leadership, and they are not getting it from the Oval Office,” said Arzt. “Andrew really does well in a crisis. And here he is, someone taking the lead and showing on the state level what needs to be done nationally.”