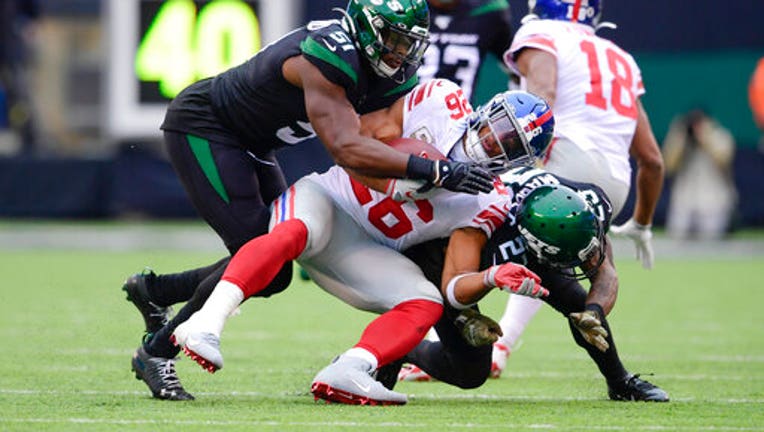 EAST RUTHERFORD, N.J. (AP) — After looking at the New York Giants' final statistics in their loss to the Jets, there can only be one conclusion: Saquon Barkley is still hurt.

How else could you explain Barkley's performance in the 34-27 loss at MetLife Stadium on Sunday in the contest between two struggling franchises?

The 2018 NFL Offensive Rookie of the Year and the No. 2 rusher in the league a season ago had 13 carries for 1 yard.

"I just have to get better," Barkley said of his performance after the Giants (2-8) lost their sixth straight and squandered a career-best four touchdown passes by rookie Daniel Jones.

Barkley has struggled since returning from a high sprain to his right ankle on Oct. 20. He was hurt against Tampa Bay on Sept. 22 and missed three games.

"I just have to get better. We lost the game. The Jets played a heck of a game," said Barkley, who also caught five passes for 30 yards.

When further asked about being hurt and being seen going to the X-ray room, Barkley shot back: "Next question."

Barkley had excuses. The Giants went into the game without right tackle Mike Remmers and center Jon Halapio for the first time this season and the problem grew when left tackle Nate Solder sustained a concussion in the first half. It left Nick Gates making his first career start at right tackle and Eric Smith at left tackle making his NFL debut. Veteran Spencer Pulley was the center.

"It's all on the O-Line," guard Will Hernandez said.

Barkley would have none of it, though, saying the Jets' defense played very well and they have done a good job all season, allowing roughly an average of 3.0 yards. He even acknowledged he congratulated Jets defensive coordinator Gregg Williams after the game for doing a good job.

Running wasn't Barkley's only problem. He failed to block a blitzing Jamal Adams early in the third quarter and the Jets safety sacked Jones, stripped the ball and returned it 25 yards for a touchdown.

Adams said the Jets defense had a target on Barkley.

"That was our focus," Adams said. "He's a great football player, obviously. One of the best backs in the league. I have a ton of respect and love for him, holding him to 1 yard on what is it? Thirteen carries? That's big."

While Barkley struggled, Jones was outstanding. He hit 26 of 40 passes for 308 yards and the four TDs on a day he was sacked six times — two by Adams — and hit 10 times.

"The guys in the locker room are behind each other," Jones said. "We know the coaches support us. I don't see that happening at all. I think we'll stay together as a team and try to work to improve."

Coach Pat Shurmur said he had no plans of making any coaching changes during the bye week and he didn't seem worried about his job despite having a 7-19 record in less than two seasons.

"My concern is putting a team on the field that's going to win a football game_that's my concern," he said. "It's always a one-week concern getting ready to play the next opponent and put a winning performance on the field. That's my concern."