Jurors in the sex-trafficking trial of Ghislaine Maxwell were shown massage tables, sex toys, and more.

NEW YORK (AP) - A green, folding massage table used by financier Jeffrey Epstein was brought into a Manhattan courtroom and set up in front of a jury on Friday to bolster allegations he teamed up with British socialite Ghislaine Maxwell to sexually exploit underage victims.

The theatrical flourish in federal court in Manhattan, courtesy of an investigator wearing rubber gloves, was meant to corroborate testimony from a key accuser at Maxwell's ongoing sex-abuse trial alleging massages were used as a pretense for the sexual encounters with Epstein that sometimes included Maxwell.

A witness who said the abuse started when she was 14 described seeing a massage table in a "massage room" that police say was in the same location where they recovered one at Epstein's Palm Beach, Florida, mansion in 2005.

A police officer testified that investigators also seized records, computers and sex toys — a photo of which was shown to the jury — from the residence.

Prosecutors showed jurors a police videotape of the residence that captured images of nude photos on the walls — decor that federal prosecutors claim is proof of a sexualized atmosphere encouraged by Maxwell to put pressure on the victims.

The evidence was presented over defense objections calling it prejudicial. Defense attorney Bobbi Sternheim accused prosecutors of trying to unfairly depict Epstein's home as a "domicile of debauchery."

Prosecutors have alleged the British socialite groomed teen girls by taking them on shopping trips and movie outings, talking to them about their lives and encouraging them to accept financial help from Epstein. The government also says she helped to create a sexually charged atmosphere by talking with the girls about sex and instructing them on the alleged sexualized massages of Epstein.

Maxwell, 59, denies the allegations against her, and her lawyers say prosecutors are going after her because they can't try Epstein, who committed suicide in jail before he could go to trial. She was Epstein's onetime girlfriend and, later, employee. 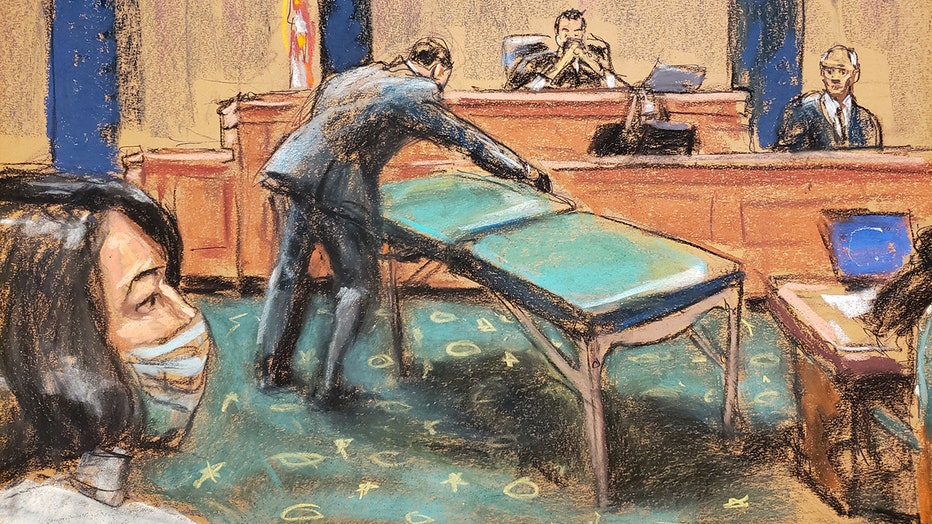 This courtroom sketch shows a prosecutor unfolding a massage table at the sex-abuse trial of Ghislaine Maxwell (left), Friday, Dec. 3, 2021, in Lower Manhattan. The table was recovered from Jeffrey Epstein's home in Palm Beach, Florida. (Sketch by Ja

The accuser, using the pseudonym "Jane" to protect her privacy, testified earlier this week that when she first visited the Epstein home she was disturbed by "some paintings of, like, naked women or half-naked women." In the massage room off of a master bedroom Epstein and Maxwell shared, the pair were "showing me, you know, what he likes, what — you know, what men like, what women like."

Also on Friday, former Epstein housekeeper Juan Patricio Alessi returned to the witness stand to face cross-examination over his testimony that "Jane" and another woman who has accused Epstein of sexually abusing her as a teen were repeated visitors at the Palm Beach mansion, where Maxwell was "the lady of the house."

A lawyer for Maxwell sought to discredit Alessi — who worked for Epstein from 1990 to 2002 — by confronting him with a deposition from a civil case that the defense says was inconsistent with his trial testimony.

Alessi claimed on Friday that none of the many young women who visited the Florida home alerted him to any misconduct.

"I wish they would have because I would have done something," he said.