MINNEAPOLIS - A relative of Daunte Wright, a 20-year-old Black man fatally shot by police in Minnesota, revealed a tragic connection between her family and George Floyd.

Wright’s aunt, Naisha Wright, said Tuesday during an emotional press conference that Floyd’s former girlfriend once taught her nephew at a high school in Minneapolis.

"I wear this shirt and the craziest thing is to find out today that my family has connections to this man, to this family. His girlfriend was the teacher for my nephew," Naisha Wright said, while pointing to her shirt with Floyd’s picture and the word "justice" across the bottom.

"My nephew was a lovable young man," she continued. "My nephew’s blood is on your hands. I’ve never seen my brother hurt like this before, never." 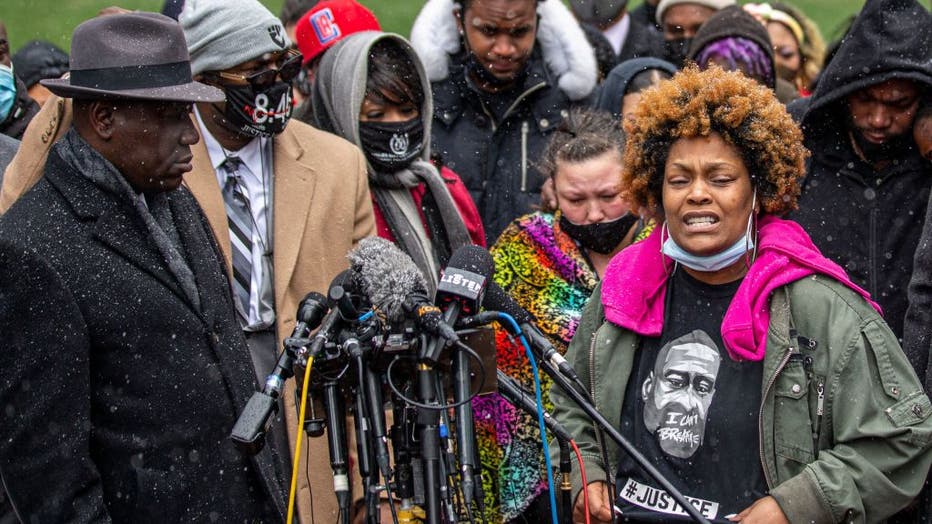 Wright was shot and killed Sunday during a traffic stop in Brooklyn Center, a city of about 30,000 people on the northwest border of Minneapolis. The officer who fatally shot Wright mistakenly drew her handgun instead of a Taser, authorities said.

Both the officer, identified as 26-year veteran Kim Potter, and Brooklyn Center Police Chief Tim Gannon have since resigned.

The Minneapolis area was already on edge because of the trial of the first of four police officers charged in George Floyd’s death last year. Tuesday’s press conference was held by attorney Benjamin Crump, who is representing both the Floyd and Wright families.

Floyd’s former girlfriend, Courteney Ross, confirmed her connection to Wright on Tuesday with the Washington Post, who described him as "a silly boy, as goofy as can be" and someone who "needed a lot of love." Ross said Wright was a student while she was a dean at Edison High School in the Northeast community of Minneapolis.

One of the last times Ross saw Wright was when she and Floyd were walking through Brooklyn Center in the summer of 2019 and they saw him being confronted by police, according to the Post.

"Students like Daunte needed more resources but they never got more resources," Ross told the outlet. "Our system doesn’t serve kids like Daunte. And now I’m seeing, more than ever, this system I once believed in, we’re done doing what we need to be doing to protect Black life."

Wright’s death sparked protests in cities nationwide, further igniting the discussion about police brutality and racial inequality in the U.S.

This week, the state also rested its case in the trial of Derek Chauvin, the former Minneapolis police officer who was recorded kneeling on Floyd’s neck for several minutes during his arrest in May. Chauvin is charged with third-degree murder, second-degree murder and second-degree manslaughter.