AAA says the national average price of gas set a new record for the 10th straight day on Thursday, and JP Morgan analysts are warning that prices could go up by another 37 percent by August.

The average national retail price for a gallon of regular gasoline is projected to surpass $6 by the end of summer, according to a recent JPMorgan research note.

On Wednesday, the national average hit another record, reaching $4.56 per gallon, according to AAA. That's already up nearly 50 cents from a month ago, and $1.52 from this time last year, according to AAA's recent data.

GAS PRICES: HOW YOUR DRIVING BEHAVIOR IMPACTS COSTS AT THE PUMP

According to JPMorgan, prices could surge another 37% by August, hitting a $6.20 per gallon national average.

This is due to "expectations of strong driving demand" throughout the summer driving season, which spans from Memorial Day and lasts until Labor Day, the analysts, led by Natasha Kaneva, the head of JPMorgan's global commodities strategy team, wrote. 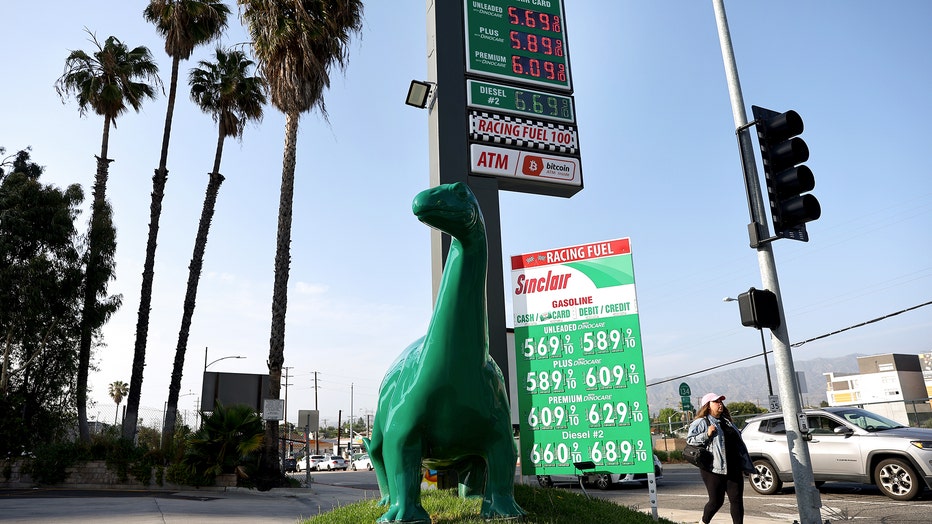 Gas prices are displayed at a Sinclair station on April 27, 2022 in Burbank, California. (Photo by Mario Tama/Getty Images)

"Typically, refiners produce more gasoline ahead of the summer road-trip season, building up inventories," the analysts said. However, since mid-April, "gasoline inventories have fallen counter seasonally and today sit at the lowest seasonal levels since 2019," the analysts continued.

The analysts cautioned that "gasoline balances on the East Coast have been even tighter, drawing to their lowest levels since 2011."

The pain at the pump is at an all-time high. Over the weekend, Florida set a record for the most expensive gas prices to date, putting the state's gas prices five cents above the national average for fuel.

Earlier this week, Los Angeles became the second metro, joining San Francisco, with the average cost for a gallon of gasoline surpassing $6.

"It's likely that more Californian cities will join," Patrick De Haan, head of petroleum analysis for GasBuddy, told FOX Business. Although, De Haan noted that he doesn't see any other cities "at high risk of hitting $6" just yet.

However, for the first time ever, the average cost for a gallon of gasoline surpassed $4 in all 50 states, driven by the high cost of oil, according to AAA.