A gut-wrenching funeral was held for Davell Gardner Jr., a boy who was killed by a stray bullet on July 12. Police said two gunmen fired into a group of people, striking Davell, who was in his stroller.

NEW YORK - A toddler who was killed by a stray bullet in Brooklyn was remembered at his funeral Monday for the "sparkle in his eyes."

The boy was shot while he sat in a stroller at a cookout on July 12. Police said two gunmen fired into a group at about 11:30 p.m. Davell, who was in his stroller, was shot in the stomach. He died at a nearby hospital.

Three men who were part of the group suffered gunshot wounds but survived. No arrests have been announced.

The New York Post reported that the toddler's father, Davell Gardner Sr., said during the service, "My son is gone. I don't have nobody. I don't have somebody to call me 'Daddy, daddy, daddy.'" 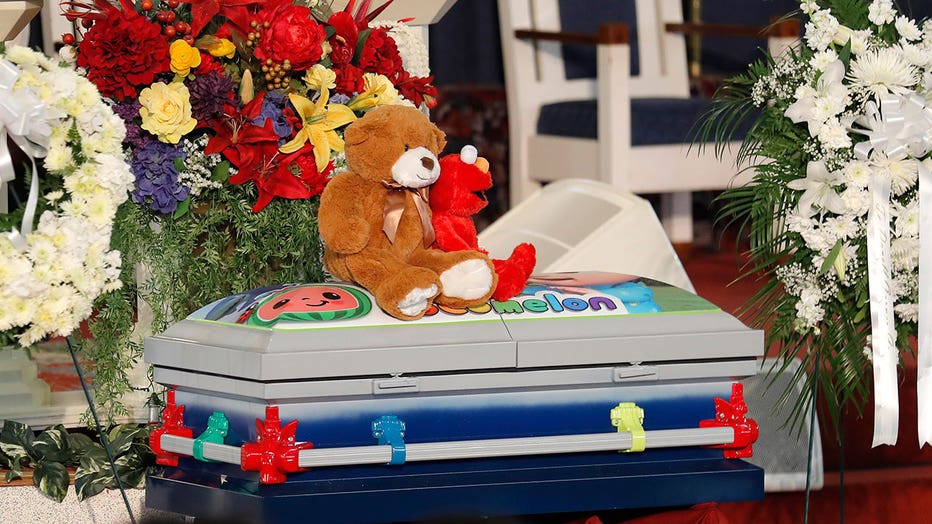 A funeral for Davell Gardner, Jr. was held in Brooklyn on Monday, July 27, 2020. Authorities are investigating the July 12 shooting that left the 1-year-old boy dead. (AP Photo/Seth Wenig)

The boy's family wrote in the funeral program that Davell "smiled and showed his dimples with a sparkle in his eyes." The family members said he "is in heaven and he’s the family guardian angel. He will never be forgotten."

"There are individuals in this church who know who's responsible for this," James told mourners. "Black lives and the lives of babies must matter to us first and foremost."

Police are on the hunt for the gunmen&nbsp;who opened fire in a playground in Brooklyn shooting four people including a one-year-old boy.