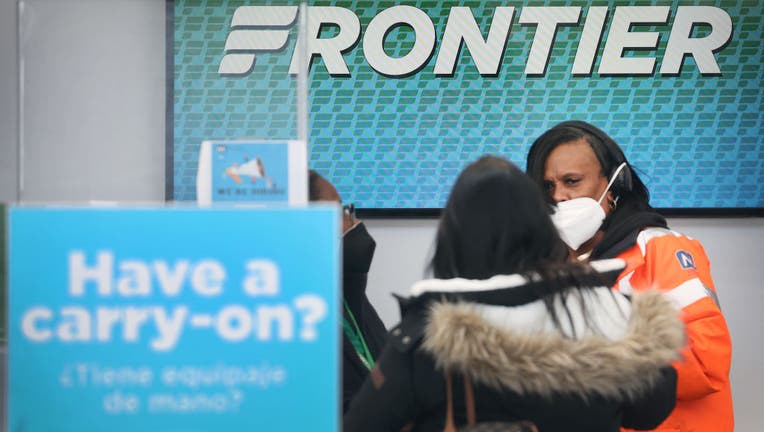 Passengers check in for flights on Frontier Airlines at O'Hare International Airport on February 07, 2022 in Chicago, Illinois. (Photo by Scott Olson/Getty Images)

If you need to speak with a customer service representative, you’ll have to do so solely through digital means now. The budget airline has transitioned to digital-only communications.

The transition will "ensure our customers get the information they need as expeditiously and efficiently as possible," Frontier spokesperson Jennifer de la Cruz told FOX Television Stations, adding that they’ve found most customers prefer communicating via digital channels anyway.

Frontier offers a chatbot, which can answer common questions. If support from a live agent is needed, live chat is available 24 hours a day seven days a week.

Frontier said customers can also chat with agents via common social media channels and Whatsapp. The company can also still be reached by email.

RELATED: Flight attendant bluntly shares travel tips: ‘We will not help you if you are mean’

Frontier didn’t give a specific reason for the transition, though the announcement comes just days after the airline was slapped with a civil penalty from the U.S. Department of Transportation.

DOT ordered Frontier to pay a $2.2 million fine for delaying flight refunds so long that they violated consumer-protection rules. Frontier was also ordered to pay $222 million in refunds.

In a consent order, the government charged that Frontier changed its definition of a significant delay to make refunds less likely, and an online system to process credits went down for a 15-day period in 2020.

De la Cruz told The Associated Press the Denver-based airline issued nearly $100 million in "goodwill refunds," including to people with non-refundable tickets who canceled on their own and were not entitled to a refund under federal law.

RELATED: 6 airlines to refund $600M to travelers whose trips were canceled, significantly delayed

The GoWild! Pass is on sale now through Nov. 28 for $799, and gets the pass holder on an unlimited number of flights for one year.

And earlier this year, Frontier was in talks to merge with fellow U.S. budget airline Spirit to compete with American, United, Delta and Southwest, though the deal was abandoned over the summer after a bidding war ensued with JetBlue.

Frontier’s business motto offers rock-bottom fares but, like other budget airlines, tacks on fees for some things that bigger carriers include with most tickets, from soft drinks to room for a bag in the overhead bin.

Frontier is reportedly now the largest U.S. airline not to offer telephone assistance.