The journey to president-elect was a long and winding road for the former vice president.

Former Vice President Joe Biden has had a prolific career in law and in federal office, which culminated in his projected election as the 46th president of the United States of America on Saturday. But his road to the White House as president-elect began long ago.

The president-elect graduated from the University of Delaware in 1965 with a double major in history and political science. Three years later, Biden attended Syracuse University and earned his law degree, according to History.com.

Biden and his young family moved to Delaware, where he worked as a lawyer for several years. 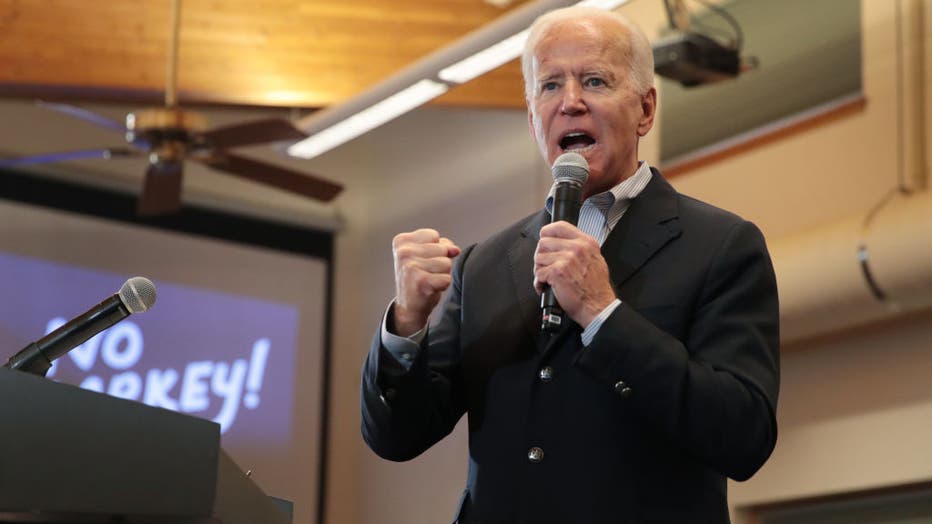 He got his first taste of public office when he ran his campaign for Newcastle County Council. Biden won by 2,000 votes, according to his website.

During his time on the county council, Biden fought “against a massive 10-lane highway project that threatened to pave over Wilmington’s neighborhoods and push back on the oil companies building refineries on the Delaware coast.”

After serving on the county council for two years in Delaware, at age 29, Biden ran for the U.S. Senate and won, unseating Republican incumbent J. Caleb Boggs. He won by 3,000 votes, according to the University of Virginia’s Miller Center. 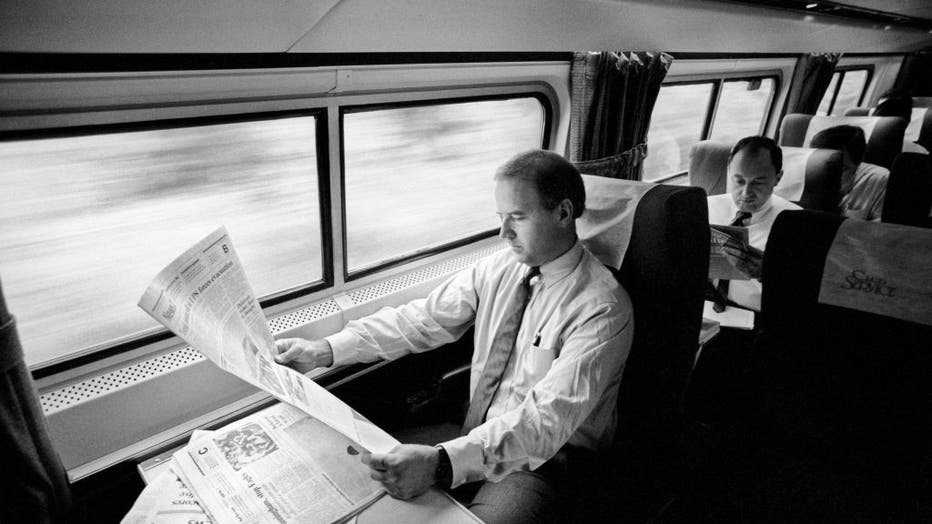 FILE - In September of 1988, then Senator Joe Biden seen on the on the metro liner from Wilmington, Delaware to Washington DC. (Joe McNally/Getty Images)

Biden became the fifth-youngest person to be elected to the U.S. Senate.

In the wake of his surprise victory and before he could be sworn into office, tragedy struck when Biden’s wife and 13-month-old daughter, Naomi, were killed after a tractor-trailer hit the family station wagon while they were on their way to pick up a Christmas tree. Both of Biden’s sons, Beau and Hunter, were critically injured. 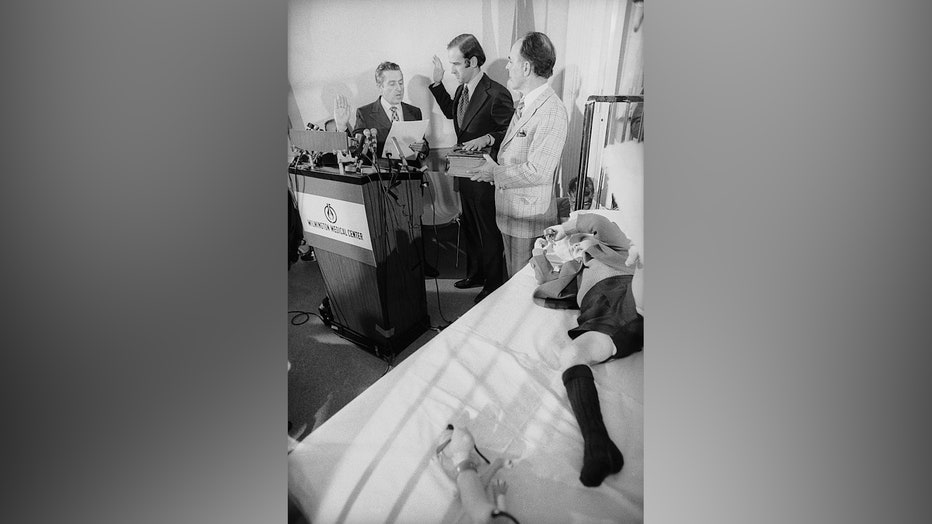 Senator Joseph Biden takes the oath of office from the U.S. Senate's secretary, Frank Valeo with his father-in-law Robert Hunter and son Joseph Beau Biden at his side, in Beau's hospital room. (Getty Images)

“Biden was sworn in as a senator from the boys' hospital bedside. While they recovered, he began commuting every day by train from Wilmington to Washington, DC, a practice that he maintained throughout his thirty-seven-year career in the Senate,” according to the Miller Center.

Five years later in 1977, Biden would meet his current wife, Jill, with whom he has one daughter, Ashley Blazer. 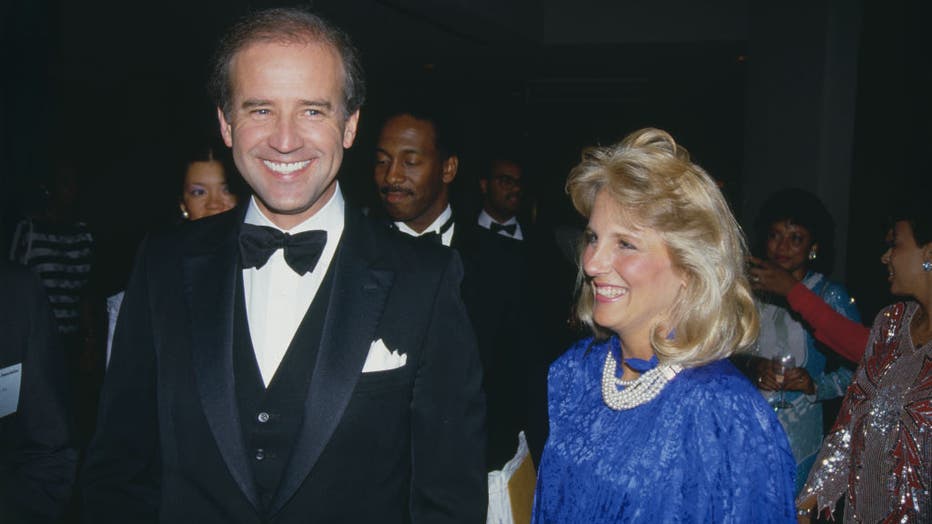 Biden was re-elected to the Senate in 1978 and would go on to win re-election another five times.

Between 1987 and 1995, Biden was the chair of the Senate Judiciary Committee and served four years as chair of the Foreign Relations Committee, according to History.com.

As chair of the Foreign Relations Committee, Biden voted against the Gulf War in 1991, but did vote to authorize the war in Iraq in 2002, according to the Miller Center.

During his time serving in the Senate, Biden worked to improve Delaware’s “corporate climate, legislated against domestic violence and crafted an anti-crime bill that provided for 100,000 more cops on the nation’s streets, banned assault weapons and mandated tougher penalties for drug dealers,” according to History.com.

Biden ran for president in 1988, but his campaign was essentially tainted “when he plagiarized an autobiographical speech by British Labor Party leader Neal Kinnock and evidence came to light about an earlier plagiarism incident while he was in law school,” the Miller Center stated.

Although Biden had credited Kinnock in prior speeches, he failed to do so during an appearance at the Iowa State Fair and even borrowed facts from Kinnock’s life, according to History.com. Biden also lied about his academic record in college and law school in a New Hampshire campaign appearance, which ultimately led him to withdraw from the race on Sept. 23, 1987, just three months after entering it.

Then in February 1988, Biden collapsed after suffering a life-threatening brain aneurysm. He underwent two surgeries and took a seven-month leave from the Senate, according to History.com. 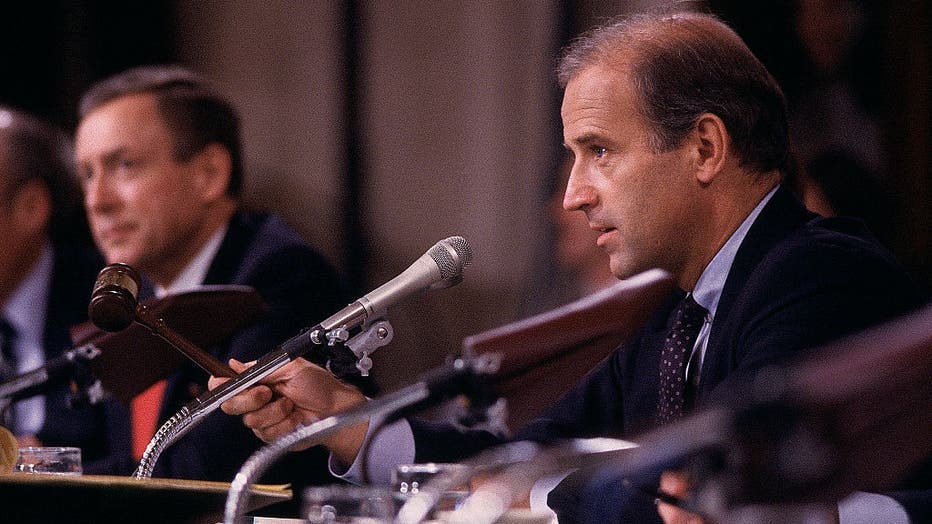 Biden is known for his decades-long leadership on nuclear arms control and strategic security negotiations, heading conversations for Strategic Arms Limitation Talks–SALT II, which was a treaty that would have called for limits on missiles, bans on certain missiles, definitions of limited systems, and verifications, according to the Arms Control Association.

“It is the beginning of his decades-long leadership on nuclear arms control and strategic security negotiations to keep the American people safe, prevent an unchecked nuclear arms race, and establish norms of international conduct,” according to Biden’s website.

He was also integral in the passing of the Brady Law in 1993, which revised the Gun Control Act of 1968. The revision implemented “a waiting period of 5 days before a licensed importer, manufacturer, or dealer may sell, deliver, or transfer a handgun to an unlicensed individual,” according to the Bureau of Alcohol, Tobacco, Firearms and Explosives. 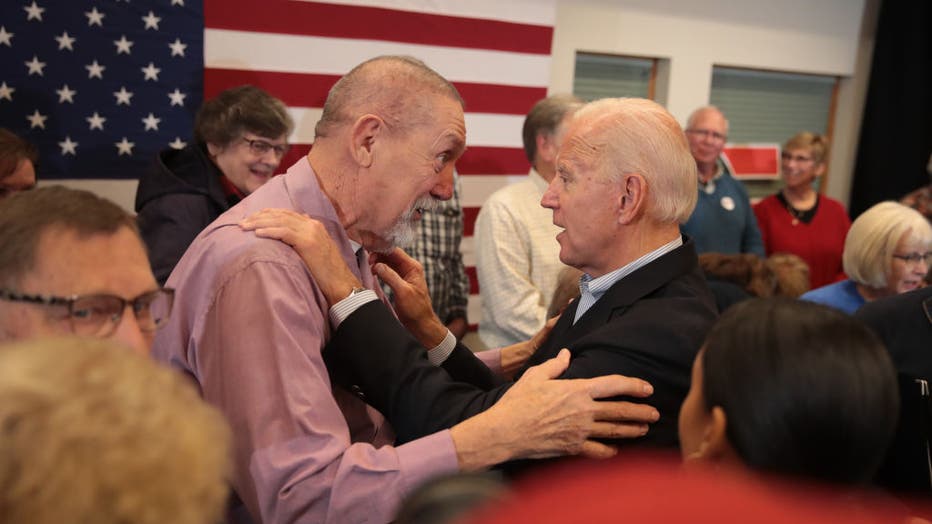 Biden also wrote and spearheaded the Violence Against Women Act which was landmark legislation that criminalized violence against women, created unprecedented resources for survivors of assault, and changed the national dialogue on domestic and sexual assault.

In 2011, Biden, along with former Secretary of Education Arne Duncan, released new guidance to help schools, colleges, and universities respond to sexual assault on campus. The new guidance clarified the legal obligations under Title IX for schools receiving federal funds to respond promptly and effectively to sexual violence, according to the White House.

RELATED: In their own words: Joe Biden, Donald Trump issue statements after race is called

In January of 2014, both Biden and Obama announced the creation of the White House Task Force to Protect Students from Sexual Assault. The task force was co-chaired by the former advisor to Biden during his vice presidency and the Executive Director of the White House Council on Women and Girls. 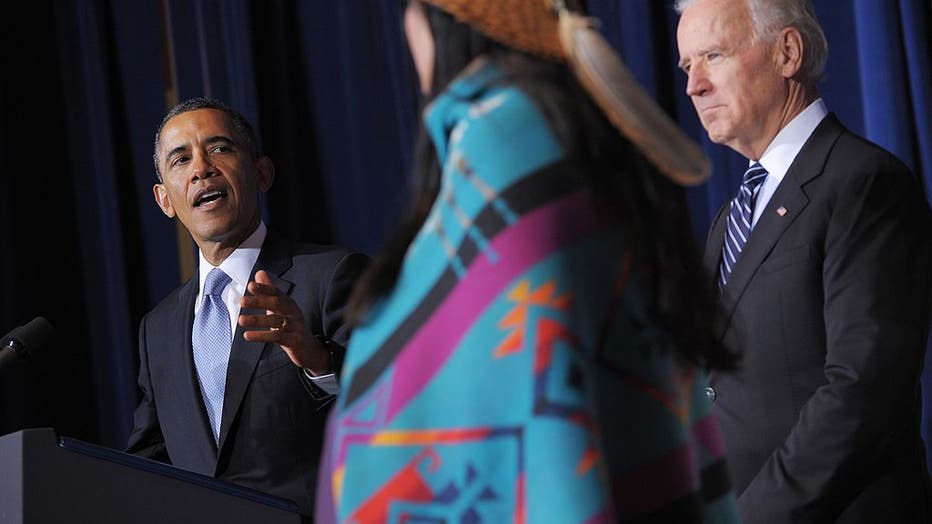 FILE - US President Barack Obama speaks as Vice Chairwoman of the Tulalip Tribes of Washington State (C) and Vice President Joe Biden watch before he signed the Violence Against Women Act on March 7, 2013 in the Department of the Interior in Washingt (MANDEL NGAN/AFP via Getty Images)

He then made a second run for presidency nearly 20 years later in 2008, but withdrew after finishing fifth in the Iowa caucuses, garnering only 1% of the vote.But his efforts to make it to the White House were not totally fruitless as Barack Obama chose Biden to be his running mate on Aug. 20, 2008.

During his first run for the White House alongside Obama, Biden was also simultaneously running for Senate. He won re-election, but resigned six weeks after due to Obama’s presidential win.

Biden’s influence as VP during the Obama administration

During his time as vice president, Biden oversaw a stimulus package following the national recession in 2007, while also running a middle-class task force.

“The goal of this Task Force has been clear from the start - to make sure the middle class emerges from this recession able to grow stronger and more secure than before it began,” said Biden in a White House annual report. “We’ve spent the past year traveling the country talking about the economic challenges facing the middle class. As a result, the initiatives we lay out in this report offer specific solutions to improve the quality-of-life for middle class families everywhere.” 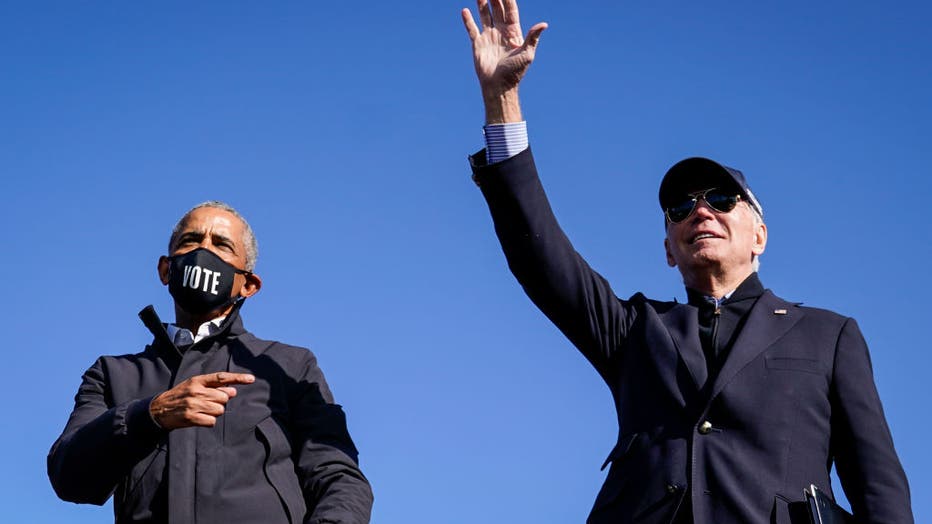 Biden was tasked with overseeing many foreign affairs policies by Obama, such as beginning to limit the number of troops in Afghanistan as well as winding down the war in Iraq.

Biden was also a critical influencer of the Senate to get approval of the New START Treaty with Russia, which brought deployed strategic nuclear weapons by the two countries to the lowest level in history, according to his website.

In 2010, “Biden brokered the compromise with Republican leaders that led to the extension of George W. Bush era tax cuts as well as unemployment benefits for the long-term jobless,” according to the Miller Center.

During his time as vice president, Biden was an influential adviser to Obama, playing a major role in policy issues such as same-sex marriage. While Obama was quietly considering his support for same-sex marriage, Biden was the first to publicly embrace the move. Three days later, Obama’s public support followed, according to the Miller Center.

In 2010, Obama signed the Affordable Care Act. Biden played a crucial role in its passage, and he has vowed to strengthen the law as president.

“As president, Biden will protect the Affordable Care Act from these continued attacks. He opposes every effort to get rid of this historic law – including efforts by Republicans, and efforts by Democrats,” according to Biden’s website.

But amid successes in his political career, tragedy struck once more on May 30, 2015, with the death of Biden’s eldest son, Beau. The former attorney general of Delaware died at age 46 due to brain cancer.

In 2016, inspired by his son’s fight against brain cancer, Biden and Obama launched the “Cancer Moonshot,” which aimed “to dramatically accelerate efforts to prevent, diagnose, and treat cancer — to achieve a decade’s worth of progress in five years."

The Cancer Moonshot Task Force was created “to bring together all Federal agencies that touch the cancer experience, charged with leveraging Federal investments, targeted incentives, private sector efforts, patient engagement initiatives, and more, to support cancer research and enable progress in prevention, diagnosis, and treatment” as well as several other initiatives to further the goal to end cancer, according to the White House.

Biden runs for president in 2020

And on April 25, 2019, Biden announced his candidacy for president. 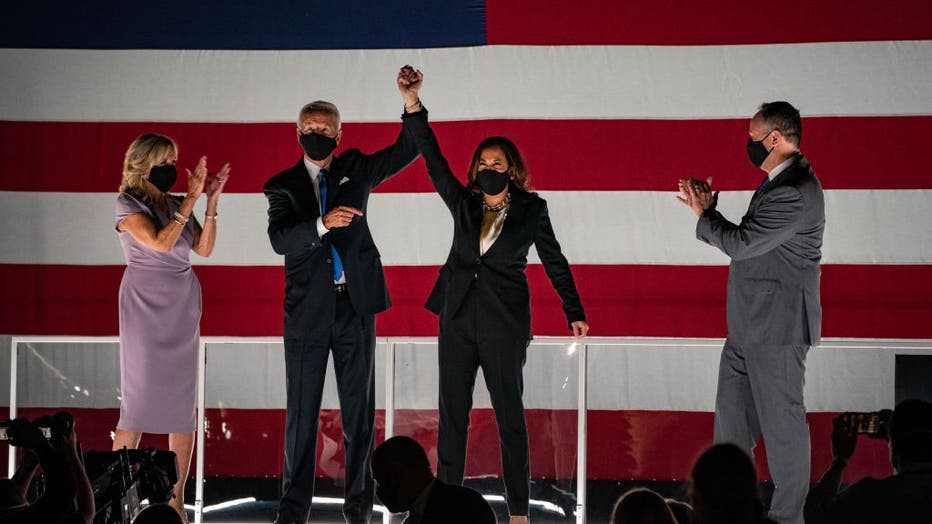