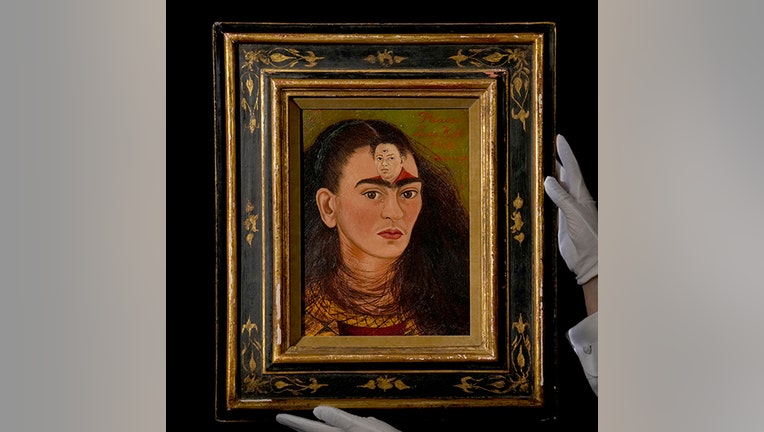 NEW YORK (AP) - A Frida Kahlo self-portrait that shows the artist with the face of her husband, Diego Rivera, in the middle of her forehead, sold at Sotheby's in New York on Tuesday for $34.9 million, an auction record for a work by a Latin American artist.

The 1949 painting, "Diego and I," depicts Kahlo's tumultuous relationship with Rivera, the Mexican muralist who was far better known than she was during their lifetimes but whose fame has been eclipsed by hers in recent years.

A Rivera painting had been the previous record-holder for the highest auction price for a Latin American artist's work — $9.8 million in 2018.

Anna Di Stasi, Sotheby's director of Latin American art, said "Diego and I" was painted in the same year that Rivera started an affair with her friend, the film star Maria Félix. Di Stasi described the work as "a painted summary of all of Kahlo's passion and pain, a tour de force of the raw emotive power of the artist at the peak of her abilities."

A Sotheby's spokesperson said the painting was bought by Eduardo F. Costantini, the founder of a museum in Buenos Aires, for his private collection. Sotheby's did not disclose the identity of the seller.