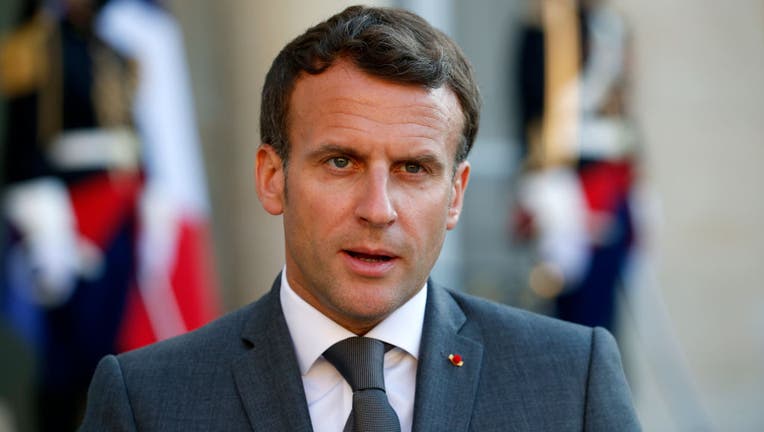 French President Emmanuel Macron makes a statement during a joint press conference with Libyan Prime Minister Abdul Hamid Dbeibah after their meeting at the Elysee Presidential Palace on June 1, 2021 in Paris, France.

PARIS - French President Emmanuel Macron on Monday ordered all French health care workers to get virus vaccine shots by Sept. 15 and urged all of his compatriots to get vaccinated as soon as possible.

In a televised address, Macron also mandated special COVID-19 passes for anyone who wants to go to a restaurant, shopping mall or several other public places.

The delta variant is driving France's virus infections back up again, just as the country kicked off summer vacation season after a long-awaited reopening process. Some 40% of France's population is fully vaccinated.

THIS IS A BREAKING NEWS UPDATE. AP's earlier story follows below.

Just three days ago, the country threw open its nightclubs for the first time in 16 months, completing a protracted national effort at returning to a pre-pandemic normal just in time for summer vacation. But with the delta variant now driving resurgent infections across Europe, potential new restrictions loom.

President Emmanuel Macron is hosting a top-level virus security meeting Monday morning and then giving a televised speech in the evening, the kind of solemn speech he’s given at each turning point in France’s virus epidemic.

This time, he’s expected to announce plans for a law requiring health care workers to get vaccinated, and may require special COVID-19 passes for restaurants or other day-to-day activities.

Either move would be unusual in Europe, where most governments have shied away from vaccine requirements.

Italy made the coronavirus vaccination obligatory for health care workers and pharmacists, and those who opt out risk suspension from their jobs or a salary cut. In Denmark, restaurants and public events require a digital pass showing you've been fully vaccinated or have a recent negative test. Some German states require the same for restaurants, though suggestions of making vaccines obligatory have prompted widespread unease.

For France, Macron may also announce other measures: A return to limits on the number of people allowed in public venues that just reawakened in May after one of the world’s longest shutdowns. Or an announcement that France could start charging money for some virus tests, which up to now have been free for everyone on French territory.

Any new measures will be relatively mild, but aimed at reminding the French that the pandemic isn’t over yet.

"We have to live with the virus," Europe Minister Clement Beaune said Sunday. "Living with the virus means we don’t re-close everything."

The government’s main weapon, and main worry, is vaccinations. France has vaccinated 40% of its population and vaccines are widely available for anyone 12 and over. But demand has ebbed in recent weeks — because of hesitancy, a sense that the virus is no longer a threat, and because some people decided to put off their shots until after summer vacation.

Meanwhile, French restaurants and bars are thriving again, the Tour de France is drawing tightly packed crowds across the country, and Hollywood stars are posing arm-in-arm and mask-free on the red carpet at the Cannes Film Festival. Cheek kisses are making a comeback.

As the La Bellevilloise nightclub reopened Friday in eastern Paris, the owner braced for the possibility that the party could be short-lived. But clubgoers were exhilarated at rediscovering the dance scene.

Parisian Laurent Queige called it "a liberation, an immense happiness." Clubgoer Sophie Anne Descoubès said she was impressed by the rigor of how the club checked her QR code showing she’d been either fully vaccinated or freshly tested, saying, "I don’t have any apprehension, just a great joy and the desire to stomp."

France’s virus infections started rising again two weeks ago, and health service SOS Medecins registered a slight rise in demand for emergency virus treatment over the weekend. The number of people in French hospitals and intensive care units has been declining for weeks, but doctors predict it too will rise when the increase in delta variant infections hits vulnerable populations, as it has in Britain and Spain.

Meanwhile, Macron also met with car industry figures Monday as he tries to combine his virus warnings with a message of hope for one of the world’s biggest economies. New infections are threatening France’s all-important tourism industry and Macron’s ambitious economic recovery plan — just nine months before the next presidential election.

Nicole Winfield in Rome, Frank Jordans in Berlin, and Jan M. Olsen in Copenhagen, Denmark contributed to this report.