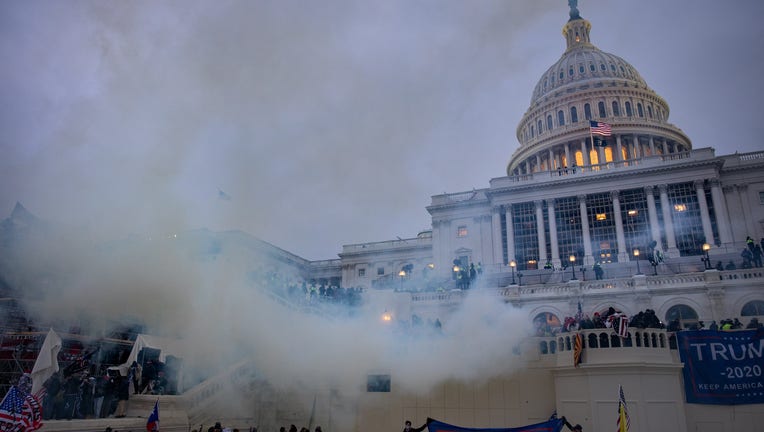 Tear gas is fired at supporters of President Trump who stormed the United States Capitol building. (Photo by Evelyn Hockstein/For The Washington Post via Getty Images)

WASHINGTON - FBI officials arrested a former Salt Lake City police officer for his alleged role in the Jan. 6 siege at the U.S. Capitol.

Michael Lee Hardin, 50, of Kaysville, Utah is charged with knowingly entering or remaining in any restricted building or grounds without lawful authority, disorderly and disruptive conduct in a restricted building or grounds, disorderly conduct in a Capitol Building and parading, demonstrating, or picketing in a Capitol Building.

An anonymous person provided a tip to the FBI that Hardin was allegedly inside the Capitol on Jan. 6, court documents show. According to the document, the person said Hardin sent text messages that said, "We stormed the Capitol, I am in here now!" and "I know you don’t like Trump, but He is the rightful President!."

A photograph of Hardin shows him wearing a beanie with the word "TRUMP" embroidered in the front while he is standing next to a bust of Abraham Lincoln inside the Capitol, according to arrest documents.

Agents added they watched a video that appeared to show Hardin inside the Capitol. They also used Hardin’s email and Google’s location tracker, which suggested Hardin was at the Capitol.

Hardin retired from the Salt Lake police department in 2017.

Prosecutors set several conditions for Hardin to be released from custody that bar him from possessing firearms or ammunition, traveling outside of Utah — unless it’s to Washington, D.C. for a court appearance — or contacting anyone who could be a potential witness or codefendant.

Hardin’s next court appearance is scheduled for April 8. He is the second Utah resident known to have been charged in the breach.

The other is John Sullivan, a self-described journalist and liberal activist. Sullivan released footage to the FBI that showed him entering the Capitol on Jan. 6 and roaming the building, according to arrest documents. His footage included video of Air Force veteran Ashli Babbitt of San Diego being shot by Capitol Police outside the Speaker’s Lobby, according to court documents.

Hardin is one of the more than 300 suspected rioters charged and believed to be part of the violent mob loyal to former President Donald Trump that stormed the U.S. Capitol and forced lawmakers into hiding in a stunning attempt to overturn America’s presidential election, undercut the nation’s democracy and keep Democrat Joe Biden from replacing Trump in the White House.

Five people died, including a Capitol Police officer and a woman shot by police.

According to USA Today, out of the more than 300 people arrested in the riot, more than 40 are current or former first responders or military veterans. At least seven current and former police officers face federal charges.