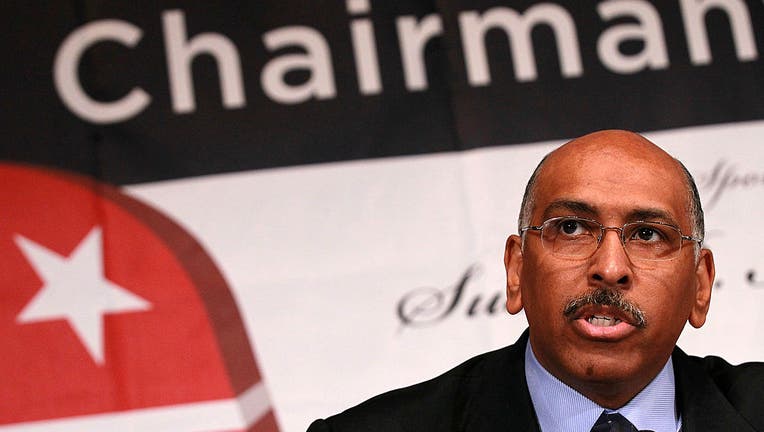 FILE - Michael Steele participates in a debate between chairmanship candidates of the RNC, co-sponsored by Americans for Tax Reform and the Daily Caller, at the National Press Club January 3, 2011 in Washington, DC.

The group has generated controversy among other Republicans by opposing not only Trump but a number of other GOP members in Congress. The president and his campaign have repeatedly belittled and discounted The Lincoln Project.

The group has spent more than $11 million so far this year to run scathing TV and digital ads attacking the president.

In the advertisement, Steele claimed Trump’s defiant attitude towards the will of the people has plunged the United States “into chaos” and that Biden will help restore order to the country.

“Imagine that night. Tensions high. A nation torn apart. A plot here in Baltimore city to assassinate a newly elected president on his way to inauguration and to plunge the country into chaos,” Steele said in the ad.

He continued: “Abraham Lincoln disembarked at this train station and under predawn skies, made his way unscathed and on to greatness. In the day ahead we may face a crisis of similar proportion. An outlaw president clinging to power and defying the will of the people. For four years, many have said there will come a moment. Well, this is the moment. Because this ballot is like none ever cast and I’m a lifelong Republican and I’m still a Republican, but this ballot is how we restore the soul of our nation. Electing a good man - Joe Biden, and a trailblazer - Kamala Harris, and ensure an orderly transfer of power or, plunge our country into chaos. America or Trump? I choose America.”

RELATED: Trump vs. Biden: Where they stand on health, economy, more

Steele served as Lt. Governor of Maryland in 2003 and was the first African American to be elected to statewide office, according to his biography.

He subsequently became chairman of the RNC in 2009 and 2010 when Republicans took control of the House.

Steele’s recent endorsement of the former vice president comes as no surprise as he’s made his disapproval for the current president well-known.

In September, Steele trended on social media after bashing Trump supporters on MSNBC for continuing to stand by the president.

“I’ve talked to enough of them over the last few days. I’m exhausted, I’m exasperated. You know, at this point, it’s like, save who you can save. Because there’s only so much you can do, there’s only so much you can say,” Steele told MSNBC’s Brian Williams last month. “The fact that we have to literally beg people to wear a mask to save their own dumb a— from getting sick, I’m sorry. To me, it is beyond the imagination... I am just so exhausted with this president.”

A spokesperson for Steele pointed to an op-ed piece published on NBC News’ Think on Tuesday, where Steele details his reasons for endorsing Biden, highlighting Trump’s handling of the ongoing pandemic as well recent civil unrest across the country.

“So here we are, faced with the re-election of President Donald Trump and the prospect of a nation still struggling against COVID-19, reeling from the ravages of a flattened economy and in pain from civil unrest and our genuine concern for how we treat one another,” Steele wrote.

“Rather than binding up the nation’s wounds, Trump exacerbates division. Rather than standing up to the world’s dictators, Trump cravenly seeks the favor of thugs. Rather than fostering free enterprise, Trump embraces economic principles not only outdated in Lincoln’s time, but made even worse today by a leader who lost close to a billion dollars in a single year running a casino. Rather than seeking to build on the legacy of the Republican Party’s founders, of which Trump is surely ignorant, Trump has posited a single purpose for the GOP — the celebration of him,” Steele continued.

Steele also pointed to a deteriorating Republican Party, claiming it has “stopped pursuing its animating principles of freedom and opportunity.”

And while Steele does not 100% agree with Biden’s stance on issues, Steele believes the Democratic presidential nominee is what the country needs.

“I, of course, disagree with Biden on many issues and policies, sometimes vigorously; and it is my fervent hope that he will pursue policies that will help our country heal. But this election is not about those issues or policies. Rather, it is about the course of a nation and the character of her people reflected in the leader they choose. I am asking my fellow Americans to consider what is in your best interests, and not Donald Trump’s,” he added.

Steele represents a growing number of Republicans breaking ties with their party to champion Biden's campaign against Trump. A decline in the president's poll numbers, meanwhile, has hurt Senate Republicans in close races, including Susan Collins in Maine and Thom Tillis in North Carolina.

Before the kickoff of the week-long RNC Convention, more than two-dozen former GOP members of Congress announced their support for “Republicans for Biden,” a new effort by the Democratic presidential nominee's campaign to engage potential party supporters this November.

Last month, the Fraternal Order of Police endorsed Trump’s reelection, saying he has the “full and enthusiastic support” of its more than 355,000 members. The FOP also endorsed Trump in 2016.