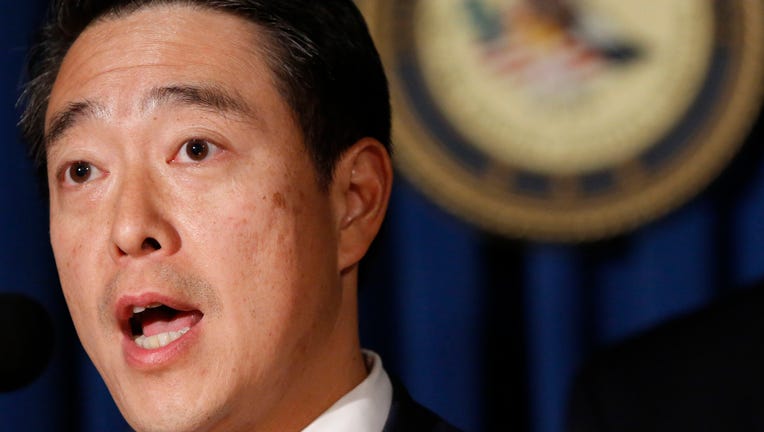 Joon Kim, who was the acting U.S. attorney for the Southern District of New York for parts of 2017 and 2018, will join the employment lawyer Anne Clark, in conducting the probe, the attorney general's office said.

"There is no question that they both have the knowledge and background necessary to lead this investigation and provide New Yorkers with the answers they deserve," James said in a statement.

The lawyer for Charlotte Bennett, one of the aides making an accusation, said the selection of the two to carry out the probe showed James was taking the matter "very seriously."

"We are encouraged by the experience and background of the attorneys who will be investigating Charlotte’s claims," attorney Debra Katz said in a statement.

As a top federal prosecutor in Manhattan, Kim played a role in its investigations of corruption in state government, including a case against one of Cuomo's closest friends and aides.

The appointments came as New York lawmakers were privately debating whether to join calls for Cuomo to resign, or urge patience while the investigation plays out.

All Republican members of the state Assembly are seeking to impeach Gov. Andrew Cuomo. But they can't succeed without support from Democrats.

A group of 21 women in the state Assembly released a statement Monday asking that James be given time to complete her probe.

The group included the no. 2 Democrat in the Assembly, Majority Leader Crystal People-Stokes. The lawmakers began working on the statement Sunday night after the Senate's top leader, Andrea Stewart-Cousins, called on Cuomo to resign.

"We continue to support our Attorney General, the first woman, and the first African American woman to be elected to this position, as she launches this investigation," it said. "We request that she be allowed the appropriate time to complete her investigation rather than undermine her role and responsibility as the chief law enforcement officer of the state of New York."

Cuomo vows to stay in office

Gov. Andrew Cuomo said he will not resign. He visited the Javits Center vaccination site on Monday. But reporters weren't allowed inside so no one could ask him any questions.

Cuomo, meanwhile, appeared with Black clergy members Monday at a vaccination site in New York City. The event was closed to reporters, but Cuomo said Sunday he has no intention of resigning and believes he can continue to govern.

Several women, including three former members of Cuomo's staff, have accused him of making inappropriate comments about their appearance, asking questions about their sex life and, in some cases, giving them uncomfortable hugs or unwanted kisses.

The governor has denied touching anyone inappropriately, and said some of the allegations are false. But he has acknowledged, and apologized for, engaging in "banter" in the office that some women interpreted as flirting. Cuomo has said he didn't realize at the time that his actions were harmful.

RELATED: Pressure increases on Cuomo to resign over allegations

Joon Kim became the leader of the federal prosecutor's office in Manhattan in 2017 after U.S. Attorney Preet Bharara was fired by President Donald Trump.

Before then, Kim held various top posts in the office including deputy U.S. attorney and chief of the criminal division.

During those years, the office investigated Joseph Percoco, a longtime Cuomo friend and top aide who was ultimately sentenced to six years in prison for accepting more than $300,000 from companies that wanted to gain influence with the governor's administration. Cuomo had once likened Percoco to a brother.

Clark is a New York City-based employment lawyer who has handled sexual harassment, disability discrimination and equal pay cases, among others. Early in her career, she worked on employment law matters with what was then the National Organization for Women’s Legal Defense and Education Fund; it’s now called Legal Momentum.

Assembly Speaker Carl Heastie, whose support would be vital for any effort to impeach Cuomo, stopped short of asking him to resign Sunday, but said: "I think it is time for the Governor to seriously consider whether he can effectively meet the needs of the people of New York."

Separately, Cuomo is under fire for withholding data from the public and from state lawmakers on COVID-19 deaths among nursing home patients. Critics say they suspect the statistics were withheld to protect the Democrat’s image — a charge the governor has denied.

NY State Republicans are accusing the Cuomo administration of covering up its mismanagement of the deaths at nursing homes during the pandemic.

Assembly Republicans announced Monday that they intended to propose articles of impeachment against Cuomo, but the party is greatly outnumbered in both houses of the legislature and the proposal is a longshot to get a vote.

Assembly member Pat Fahy, who signed the letter from the 21 female lawmakers, said that she believes calls for a resignation or impeachment are undermining James' ability to investigate harassment allegations.

"We have somebody we presumably trust and we finally have a women, a woman of color as the chief law enforcement officer for the state," Fahy said. "Let’s suddenly not undermine her."

"These calls I don’t think should be tried out in the press," she said. "If the findings of the attorney general says that he is guilty of sexual harassment, at that point the governor should step down."