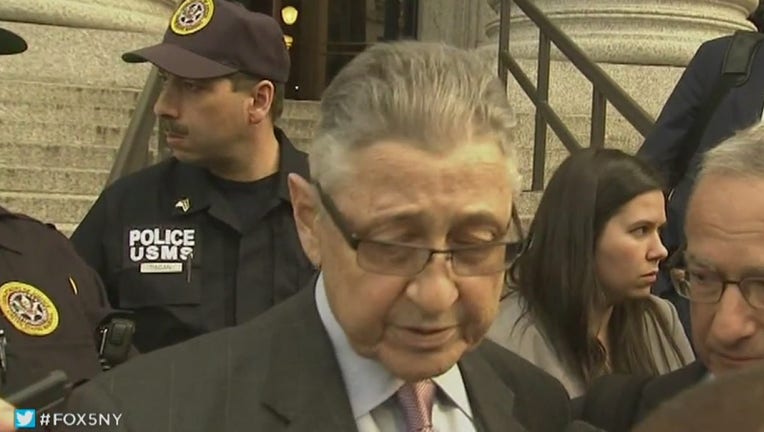 NEW YORK (AP) - Former New York Assembly Speaker Sheldon Silver, once one of the most powerful politicians in the state, started his prison sentence Wednesday after years of fending off going behind bars.

Silver, 76, reported to a federal prison in Otisville, New York, according to a statement from the Federal Bureau of Prisons. He was sentenced earlier this year to 6 1/2 years behind bars in a corruption case.

Messages were left on Tuesday seeking comment from Silver's lawyers on the surrender.

The Democrat was ousted as speaker in 2015 and convicted later that year, but appeals had kept him out of prison. His conviction in federal court in Manhattan was overturned on appeal before he was convicted again in 2018.

Part of that conviction was then tossed out on another appeal, leading to yet another sentencing in July where he asked a judge not to let him die in prison. His lawyers had sought a term of home confinement, arguing that sending him to prison would worsen existing health issues or risk having him die from the coronavirus.

But District Judge Valerie Caproni said she had no option but to finally punish him for what she called "corruption, pure and simple."

"His time has come," Caproni said. "He needs to go to jail."

In the part of the case that survived the appeal process, Silver was convicted in a scheme that involved favors and business traded between two real estate developers and a law firm. He supported legislation in Albany that benefited the developers, who then referred certain tax business to a law firm that paid him fees.

The federal prison in Otisville is about 80 miles (130 kilometers) from New York City, tucked in the lush countryside south of the Catskill Mountains.

Recent inmates there have included Michael Cohen, President Donald Trump's former personal lawyer and fixer who pleaded guilty to tax evasion, campaign finance charges and lying to Congress. Cohen is still serving his sentence, but was released to house arrest along with other prisoners to limit the spread of the coronavirus behind bars.

Another Otisville inmate recently released because of the virus was Dean Skelos, the Republican who led New York's Senate between 2011 and 2015. He, like Silver, was forced from office in a corruption scandal.

As a new inmate, Silver will be tested for COVID-19 and placed in quarantine for 14 days.