Crews responded to the US Auto Auction building on Route 130 around 9:30 p.m. Tuesday after the building had become overwhelmed with flames. Pennsauken Fire Chief Joseph Palumbo said flames were shooting through the roof when firefighters arrived.

As the flames continued to rage, fire officials say several explosions were heard inside the building from cars being stored inside. Chief Palumbo said the half-block building housed at least four businesses.

Fire crews remain on scene of massive fire at building in Pennsauken; no injuries reported

FOX 29's Shaynah Ferreira has the latest details on the 4-alarm fire that broke out late Tuesday night.

Multiple fire departments from around Camden County responded to the fire that eventually reached 4-alarms. The blaze was finally placed under control around 3 a.m., but firefighters were still extinguishing hot spots well into Wednesday morning. 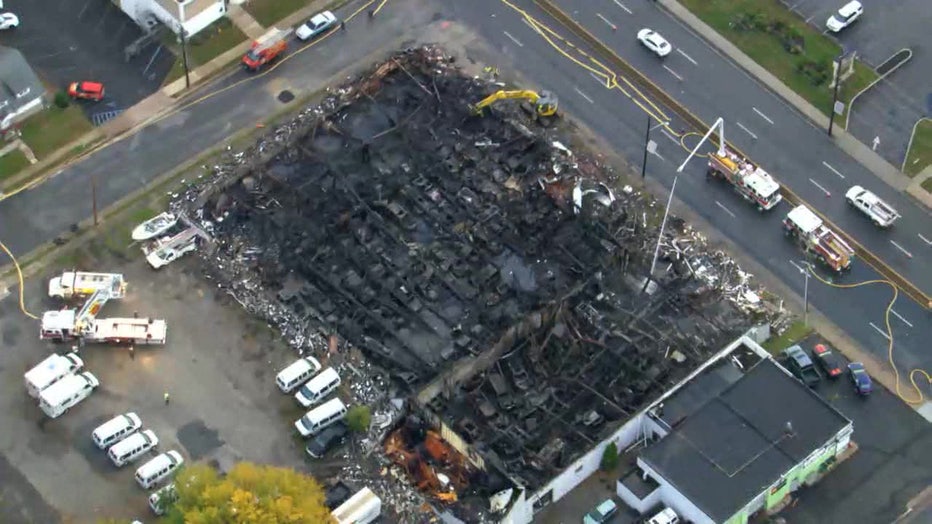 A 9-alarm fire torched a car dealership in Pennsauken overnight.

The southbound lanes of Route 130 remained closed through rush hour, causing heavy delays and forcing motorists to seek alternate routes. The road was finally reopened in the afternoon.

No injuries to firefighters or civilians were reported.