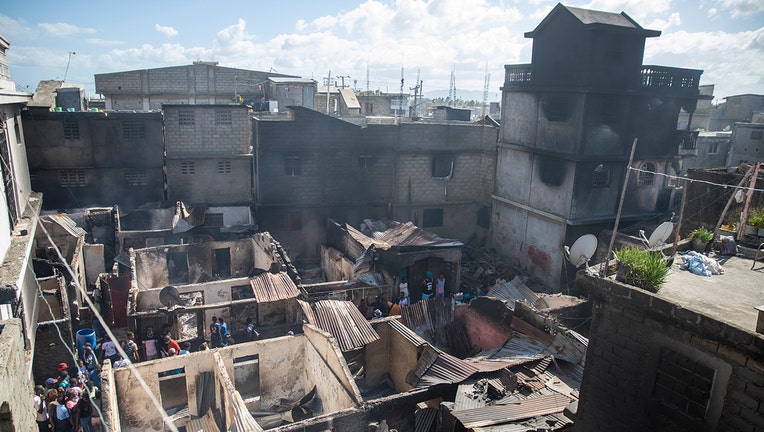 Residents stand amid their homes damaged by a gasoline truck that overturned and exploded in Cap-Haitien, Haiti, Tuesday, Dec. 14, 2021. The explosion engulfed cars and homes in flames, killing and injuring dozens of people. (AP Photo/Odelyn Joseph)

CAP-HAITIEN, Haiti (AP) - Nelly Joseph picked through the twisted metal roofing, overturned furnishings and rubble of her charred home Wednesday, unsure of where her dead son had been buried or where she would sleep after blasts from a flipped gas tanker destroyed their house.

Late Monday night, Joseph heard a loud noise and got out of bed. She heard people saying a gas truck had crashed, so she grabbed her identification card and went out to join them. With fuel in short supply all across Haiti, some neighbors in the northern city of Cap-Haitien saw a chance to scoop up valuable spilled gasoline.

Then the first explosions occurred. Her son Josue Junior Julemis, 36, hustled two of his children to safety. Then he returned to get his identification card from their home.

That's when a much stronger explosion destroyed the three-room house they shared, blackening its walls and blowing off the roof.

Joseph's son was burned all over his face and body, she said. He died at the hospital. His wife and 14-year-old daughter were burned too and hospitalized. 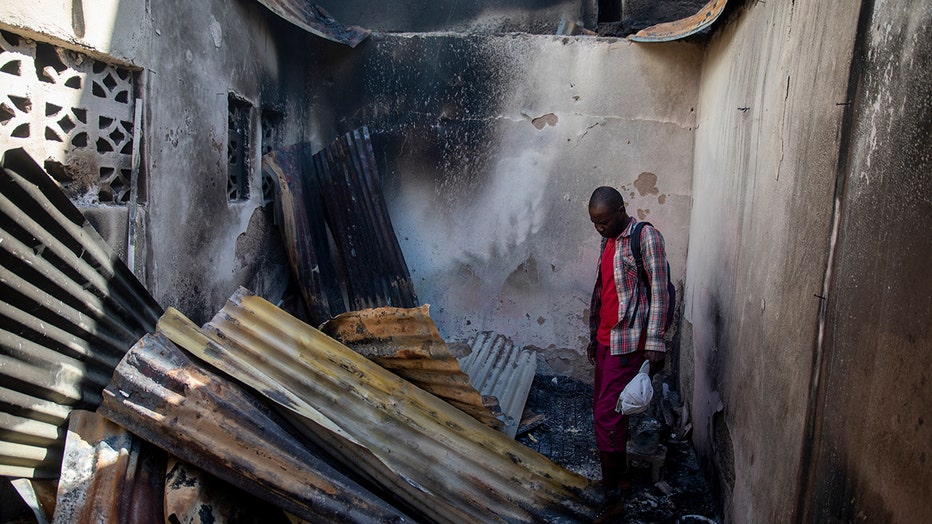 A resident looks at collapsed tin roof inside a home damaged by a gasoline truck that overturned and exploded in Cap-Haitien, Haiti, Tuesday, Dec. 14, 2021. (AP Photo/Odelyn Joseph)

The city buried his body in a mass grave, but Joseph doesn't know where.

He was one of at least 75 people killed in the explosion, said Jean-Henri Petit, coordinator of the civil protection agency.

"He was a great guy," Joseph said through tears. "Whenever I'm sick he pays for me at the hospital. Now he is gone, if I die I don't have anyone to bury me."

"I lost everything," said the 56-year-old who sells peanut butter spread on cassava in the street. "Now I'm on the streets (with) nowhere to sleep or stay."

On Wednesday, residents continued to pick through charred vehicles and buildings adjacent to the tanker truck's skeleton.

EXPLAINER: Why Haiti is prone to devastating earthquakes

Holding rags to their noses, some peeked under a white sheet draped over a body.

The explosion battered the concrete three-story façade of the building that separated Joseph's home from the street. One side had housed a small shop selling soft drinks, the other housed a business selling cement for construction.

Early reports indicate that the tanker was trying to avoid an oncoming motorcycle when it veered and flipped early Tuesday.

Onlookers then rushed to the scene with buckets to collect what they could of the tanker's cargo, likely for sale on the black market, as the fuel drained toward a nearby pile of smoldering trash.

Prime Minister Ariel Henry, himself a physician, visited a hospital Tuesday as victims bandaged head to toe were fighting for their lives amid a shortage of medical supplies and health workers in an impoverished nation that has been bombarded by disasters in recent months — riots, a wave of kidnappings, a powerful earthquake that killed more than 2,200 people and the July 7 assassination of the president.

"The entire Haitian nation is grieving," Henry said on Twitter while declaring three days of national mourning. "It is with a torn heart that I see the critical condition of some of our compatriots admitted to this facility."