There were no glimmers of optimism: European and Asian stock indexes were down as much as 10%, as was the price of oil. Trading in Wall Street futures was halted after they fell by the maximum 5%.

The Fed on Sunday made an emergency cut to its key interest rate, slashing it by a full percentage point to a range between zero and 0.25%. The central bank said it would stay there until it feels confident the economy can survive a near-shutdown of activity in the United States.

The Fed said it also will buy at least $500 billion of Treasury securities and $200 billion of mortgage-backed securities. This amounts to an effort to ease market disruptions that have made it harder for banks and large investors to sell Treasuries and to keep longer-term rates borrowing rates down.

“Despite whipping out the big guns,” the Fed’s action is “falling short of being the decisive backstop for markets,” said Vishnu Varathan of Mizuho Bank in a report. “Markets might have perceived the Fed’s response as panic, feeding into its own fears.”

The Fed action came as major economies expanded travel curbs and closed more public facilities, raising the cost of efforts to contain the outbreak that has infected nearly 170,000 people worldwide. China, where the coronavirus emerged in December, accounts for about half of those, but a dozen other countries have more than 1,000 cases each.

The Bank of Japan also announced plans to provide up to 8 trillion yen ($75 billion) in no-interest, one-year loans to companies that face cash crunches. 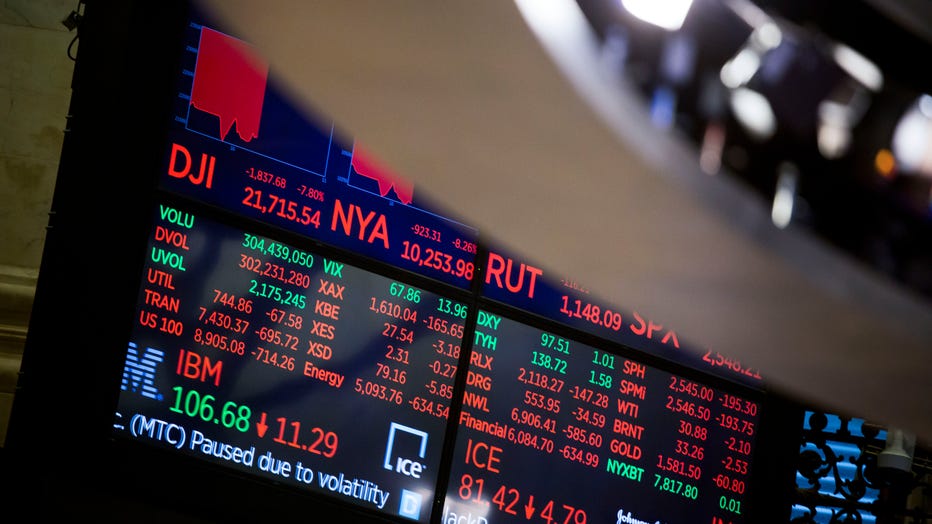 The measures came on top of stimulus from other major authorities, including the European Central Bank and the Bank of England last week.

The S&P 500 future stopped trading after being down 4.8% and the Dow’s was likewise suspended, being down 4.6%.

Volatility appears to be the new normal following a dizzying week in which the Dow twice fell by more than 2,000 points and also record its biggest point gain ever — 1,985 points on Friday.

The U.S. bull market that began in 2009 in the depths of the financial crisis came to an end. Many stock indexes last week suffered their biggest daily drop since the Black Monday crash of 1987 and some even logged their sharpest fall ever.

The leaders of the Group of Seven developed democracies will hold a call on Monday. European finance ministers are also discussing ways to help the economy keep going through the disruption as some countries in the region unveil stimulus plans, including guarantees for businesses and even individuals’ salaries.

The Shanghai Composite Index declined 3.4% to 2,789.25 after the government reported retail sales fell 20.5% from a year ago in January and February after shopping malls and other businesses were closed. Factory output declined by a record 13.5% after the Lunar New Year holiday was extended to keep manufacturing workers at home.

The figures were even bleaker than economists expected. Some cut their forecasts for the world’s second-largest economy. ING said this year’s growth might fall as low as 3.6%, the weakest since at least the 1970s.

Over the weekend, Spain followed Italy’s lead in imposing nationwide curbs that will allow its 46 million people to leave home only to go to work, to buy food and medicine or on errands to care for the young and elderly.

In the Philippines, soldiers and police sealed off the crowded capital, Manila, from most domestic travelers.

New York City announced it will shut down the largest U.S. public school system as early as Tuesday, sending more than 1.1 million children home. Governors in California, Illinois and Ohio told all bars and restaurants to close or reduce their number of customers.

For most people, the coronavirus causes only mild or moderate symptoms, such as fever and cough, and those with mild illness recover in about two weeks. But severe illness including pneumonia can occur, especially in the elderly and people with existing health problems, and recovery could take six weeks in such cases.

There are 169,000 confirmed cases of the virus worldwide, according to a tally by Johns Hopkins University. Most of the world’s 77,000 recovered patients are in China.

Experts expect the disruptions to travel and even to daily life to last for weeks, possibly months.

JPMorgan Chase now is forecasting the U.S. economy will shrink at a 2% annual rate in the current quarter and 3% in the April-June quarter.

The Fed’s decision to act before a meeting scheduled for mid-week indicated its policymakers felt they needed to move immediately to shore up investor confidence. Most market watchers expect more volatility ahead because the number of U.S. virus cases is rising and more industries face a downturn.

The magnitude of the central bank moves indicated to some analysts that Chair Jerome Powell and other members of the Fed were worried about the health of the financial system. But others noted the Fed was just reacting to signs the situation in Europe and the U.S. was only getting worse.

“The Fed’s actions were very bold and it does appear to have spooked the markets,” said Nate Thooft, head of global asset allocation at Manulife Investment Management.

“Markets were going to be spooked anyway due to the scale of the shutdowns across the U.S. and sobering implications of a $20 trillion dollar economy that is about to grind down to a crawl,” said Yung-yu Ma, chief investment strategist at BMO Wealth Management.

“Also, developments in Europe are raising the prospect that what was just a week ago considered ‘worst case’ might be closer to ‘base case’ for the U.S.,” Ma said. “Big picture, the Fed’s actions are all positive.”