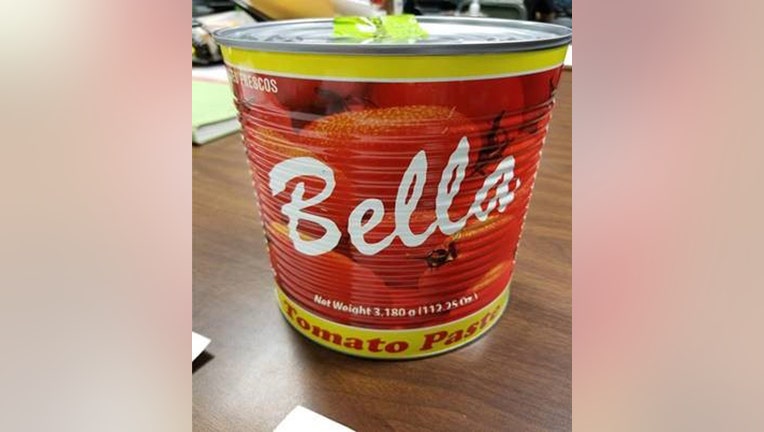 Federal officers at Kennedy Airport say they found cocaine inside this metal can. (U.S. Customs and Border Protection photo)

NEW YORK - A traveler flying into New York City from the Dominican Republic the day after Christmas tried smuggling cocaine through customs inside of a tomato paste can, authorities said.

The man, who arrived on a flight from Santo Domingo on Dec. 26, "had a little more than spaghetti and meatballs in mind as U.S. Customs and Border Protection officers seized his illegal condiment," the agency said in a news release.

The feds said the can held about 5 pounds of cocaine, which has a street value of $160,000. Officers arrested the traveler on federal narcotics smuggling charges and handed him over to Homeland Security Investigations agents.

"The smuggling of illicit drugs poses a significant threat to our nation, and CBP does its part in keeping these drugs off our streets," New York Field Operations Director Troy Miller said in a statement. "As America’s unified border security agency, our employees are determined to protect the public from these substances."