WASHINGTON - In an interview with the Financial Times, Food and Drug Administration Commissioner Dr. Stephen Hahn said a potential emergency authorization for a coronavirus vaccine before the completion of Phase 3 clinical trials would be “appropriate” if his agency found that the benefits outweighed the risks.

“It is up to the sponsor [vaccine developer] to apply for authorization or approval, and we make an adjudication of their application,” Hahn said. “If they do that before the end of Phase 3, we may find that appropriate. We may find that inappropriate, we will make a determination.”

Hahn’s suggestion that the U.S. could authorize use of a COVID-19 vaccine early comes after Hahn was forced to backtrack on an erroneous statistic he used to overstate the effectiveness of the blood plasma therapy that the FDA granted emergency use to for COVID-19.

Hahn had misstated claims about the lifesaving power of convalescent plasma therapy for the coronavirus, a treatment which was granted emergency authorization by the FDA in August. He later walked back his statements, admitting that they were inaccurate.

“I have been criticized for remarks I made Sunday night about the benefits of convalescent plasma. The criticism is entirely justified,” Hahn tweeted on Aug. 24. “What I should have said better is that the data show a relative risk reduction not an absolute risk reduction.”

On Aug. 28, Hahn removed a public relations official involved in the botched plasma announcement from her role heading the agency's press office, according to a person familiar with the matter, who spoke to the Associated Press on condition of anonymity to describe private conversations.

Scientists and medical experts have been pushing back against the claims about the treatment since President Donald Trump’s announcement on Aug. 23 that the FDA had decided to issue the emergency use authorization for convalescent plasma taken from patients who have recovered from the coronavirus (https://apnews.com/VirusOutbreak) as a treatment for COVID-19.

The U.S. has invested billions of dollars in efforts to quickly develop multiple vaccines against COVID-19. But public fears that a vaccine is unsafe or ineffective could be disastrous, derailing the effort to vaccinate millions of Americans.

The American Medical Association urged the FDA to set up new processes to keep the medical community in the loop on vaccine developments, warning that public confidence is at stake. The group has also challenged the CDC to produce scientific data to back up its new testing recommendation.

The Trump administration said Tuesday that it will not work with an international cooperative effort to develop and distribute a COVID-19 vaccine because it does not want to be constrained by multilateral groups like the World Health Organization. 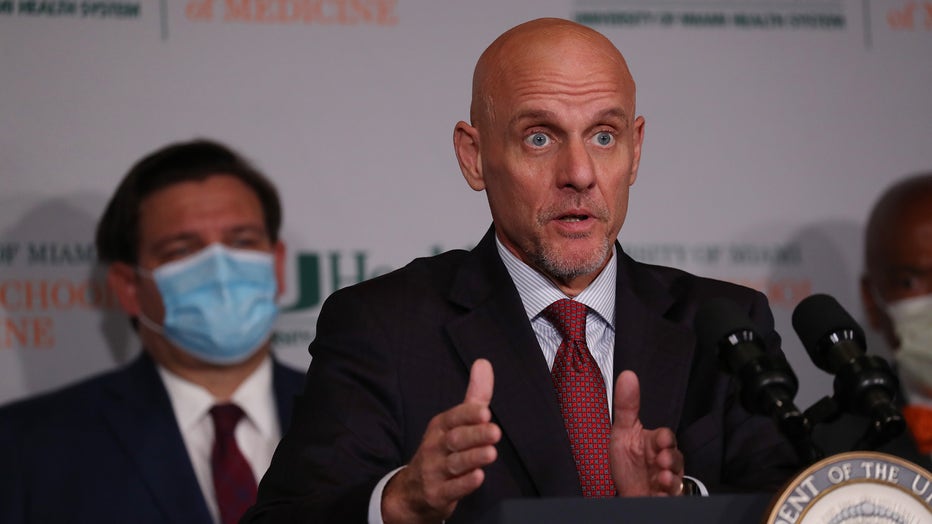 FDA Commissioner Dr. Stephen Hahn speaks during a press conference at the University of Miami Miller School of Medicine on July 27, 2020 in Miami, Florida. (Photo by Joe Raedle/Getty Images)

The decision to go it alone, first reported by The Washington Post, follows the White House’s decision in early July to pull the United States out of the WHO. Trump claims the WHO is in need of reform and is heavily influenced by China.

Some nations have worked directly to secure supplies of vaccine, but others are pooling efforts to ensure success against a disease that has no geographical boundaries. More than 150 countries are setting up the COVID-19 Vaccines Global Access Facility, or COVAX.

That cooperative effort, linked with the WHO, would allow nations to take advantage of a portfolio of potential vaccines to ensure their citizens are quickly covered by whichever ones are deemed effective. The WHO says even governments making deals with individual vaccine makers would benefit from joining COVAX because it would provide backup vaccines in case the ones being made through bilateral deals with manufacturers aren't successful.

“The United States will continue to engage our international partners to ensure we defeat this virus, but we will not be constrained by multilateral organizations influenced by the corrupt World Health Organization and China," said White House spokesman Judd Deere. "This president will spare no expense to ensure that any new vaccine maintains our own Food and Drug Administration's gold standard for safety and efficacy, is thoroughly tested and saves lives.”

A handful of the dozens of experimental COVID-19 vaccines in human testing have reached the last and biggest hurdle — looking for the needed proof that they really work.

AstraZeneca announced Monday its vaccine candidate has entered the final testing stage in the U.S. The Cambridge, England-based company said the study will involve up to 30,000 adults from various racial, ethnic and geographic groups.

Two other vaccine candidates began final testing this summer in tens of thousands of people in the U.S. One was created by the National Institutes of Health and manufactured by Moderna Inc., and the other developed by Pfizer Inc. and Germany’s BioNTech.