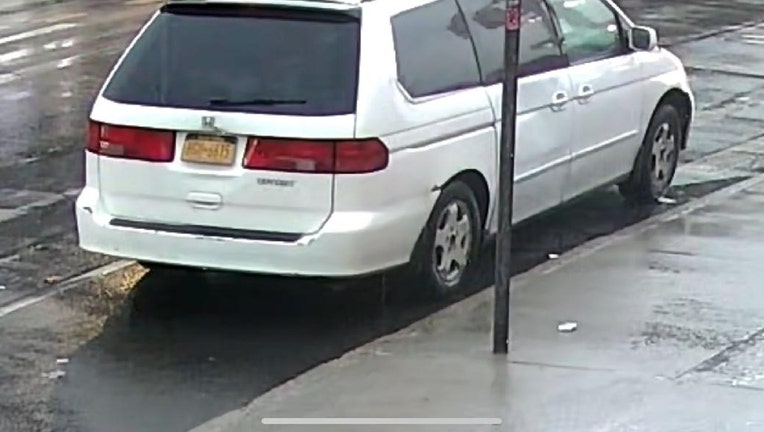 NEW YORK - The FBI is offering a reward of up to $5,000 for information leading to the arrest of a man wanted for a violent robbery of a Bronx post office earlier this week.

They have released a photo of a white Honda van they say the robber used to get away.  Investigators were able to get surveillance video of a partial NY state license plate, with the last four numbers - 6615. There were also small white shoes hanging from the rear-view mirror of the van.

The armed robber got away with more than $100,000 and 1,000 blank money orders from the post office, according to the NYPD.

The robber walked up to a 56-year-old U.S. postal worker in front of 1163 Castle Hill Ave. in Unionport at about 7:15 a.m. on Tuesday and hit her in the head with a black gun.

Her husband, who had walked away after she got to work, heard her screaming and ran back.

The gunman told them "Don't be stupid" and ordered them to let him into the post office, police said.

They handed over the cash and 10 boxes of blank money orders, police said. The thief also demanded a printer for the money orders before taking off.

Authorities are investigating an armed robbery at a U.S. Postal Service facility in the Bronx. The robber got away with more than $100,000 and 1,000 blank money orders, police said. However, the U.S. Postal Inspection Service, which is leading the investigation with help from the NYPD and FBI, wouldn't confirm any details of the incident.

Security camera video from a nearby business shows a woman and a man walking across the street toward the post office.

The NYPD said the man is the woman's husband. He is seen in the video walking away, presumably as his wife starts work.

The video then shows someone running toward the victim. The husband then runs over to help her. The suspect then forcing them into the post office.

The robber then walks out with what looks like a big bag a short time after.

The New York City Police Department described the robber as a Black man wearing all-black clothing and a full-face mask. There were reports that the man was wearing a Squid Game mask but police could not confirm that.