The FBI has raided the headquarters of the NYPD's Sergeants Benevolent Association in Manhattan.

NEW YORK - Federal agents raided the offices Tuesday of a New York City police union, the Sergeants Benevolent Association, and the Long Island home of its bombastic leader, who has clashed with city officials over his incendiary tweets and hard-line tactics.

FBI spokesperson Martin Feely said agents were "carrying out a law enforcement action in connection with an ongoing investigation."

Agents were seen carrying boxes out of the union's Manhattan headquarters and loading them into a van. The FBI also searched union president Ed Mullins' home in Port Washington, Long Island, Feely said.

Messages seeking comment were left with Mullins and the union, which represents about 13,000 active and retired NYPD sergeants and controls a $264 million retirement fund.

Calls to Mullins' cellphone went to a full voicemail box.

Mullins, a police sergeant detached to full-time union work, is in the middle of department disciplinary proceedings for tweeting NYPD paperwork last year regarding the arrest of Mayor Bill de Blasio's daughter during protests over the Minneapolis police killing of George Floyd.

Mullins' department trial began last month but was postponed indefinitely after one of his lawyers suffered a medical emergency.

Mullins is also suing the department, claiming they were trying to muzzle him by grilling him and recommending disciplinary action over his online missives, which have included claims that officers were at war with city leaders.

"I think he's been a divisive voice," de Blasio said of Mullins. "But that doesn't cause me to feel anything in this situation because I don't know what's happening. All I hear is an FBI raid. I don't know the specifics, I don't know who it's directed at. I want to really hear the details before I comment further."

The Sergeants Benevolent Association runs a Widows and Children's Fund, a scholarship fund for members' children, and Blue Christmas, which distributes toys to needy children.

Mullins, a police officer since 1982, rose to sergeant, a rank above detective but below captain and lieutenant, in 1993 and was elected president of the sergeants union in 2002.

Under Mullins' leadership, the union has fought for better pay — with contracts resulting in pay increases of 40% — and staked a prominent position in the anti-reform movement.

Though he's a full-time union chief, city law has allowed Mullins to retain his sergeant's position and collect salaries from both the union and the police department. Last year, Mullins made more than $220,000 between the two, according to public records: $88,757 from the union and $133,195 from the NYPD.

The NYPD referred questions about Mullins to the FBI.

Along with Mullins' periodic appearances on cable networks like Fox News and Newsmax — including one in which he was pictured in front of a QAnon mug — perhaps the union's most powerful megaphone is its 45,000-follower Twitter account, which Mullins runs himself, often to fiery effect. 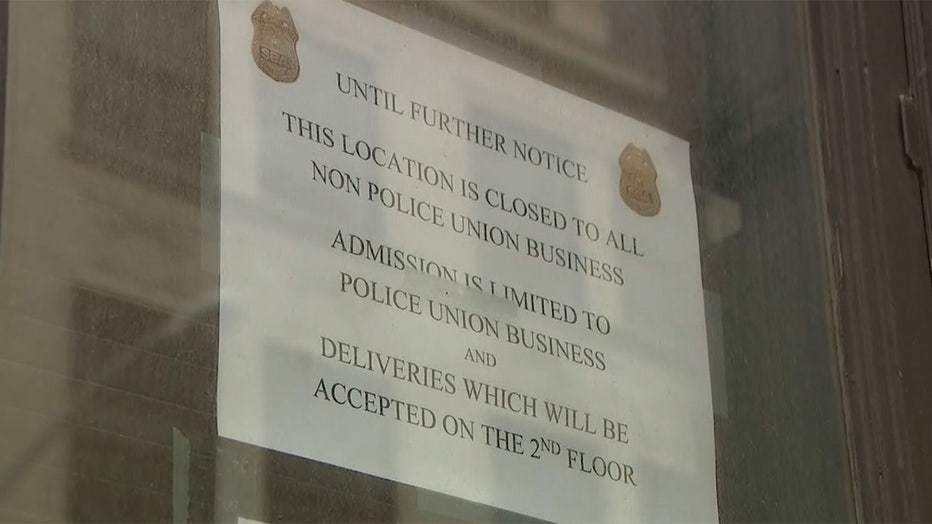 In 2018, amid a rash of incidents in which police officers were doused with water, Mullins suggested it was time for then-Commissioner James O'Neill and Chief of Department Terence Monahan to "consider another profession" and tweeted that "O'KNEEL must go!"

O'Neill retorted that Mullins was "a bit of a keyboard gangster" who seldom showed up to department functions.

Mullins was upset over reports Barbot refused to give face masks to police in the early days of the pandemic and angry with Torres' calls for an investigation into a potential police work slowdown in September 2020.

Torres, who is gay, denounced Mullins' tweet as homophobic.

On Tuesday, Torres referenced that tweet in reacting to the news of the raid, writing: "Ed Mullins, who famously called me a 'first-class whore' for daring to ask questions about the @SBANYPD, just got a first-class raid from the FBI."

In 2019, it wasn't tweets that got Mullins in trouble, but rather comments he made in a radio interview suggesting that slain Barnard College student Tessa Majors had gone to the park where she was killed to buy marijuana. Police later arrested three teens, saying she'd been stabbed during an attempted robbery.

Majors' family called Mullins' remarks on the radio show "deeply inappropriate" victim blaming and urged him "not to engage in such irresponsible public speculation."