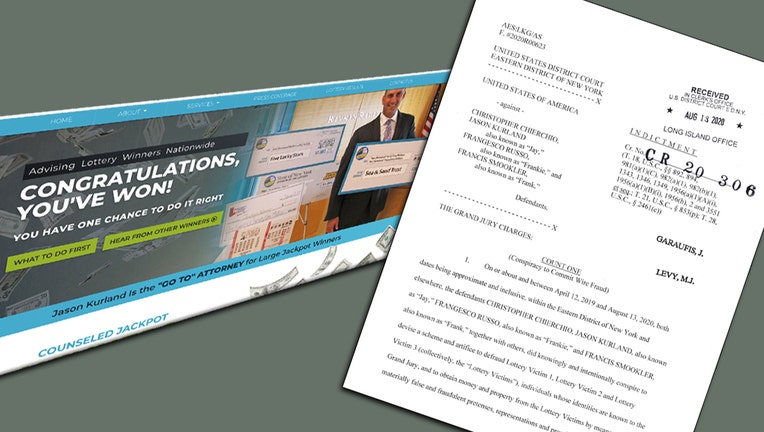 A screenshot of the archived homepage of TheLotteryLawyer.com (left) and the first page of a federal indictment. (FOX 5 NY illustration)

NEW YORK (AP) - A New York attorney who branded himself the "Lottery Lawyer" has been charged with swindling millions of dollars from jackpot winners in a conspiracy that federal prosecutors say involved a member of the Genovese crime family.

One of the victims won the $1.5 billion Mega Millions lottery, authorities said, while another had hauled in a $245 million Powerball jackpot.

Messages were sent to Kurland and his law firm seeking comment.

Chierchio's defense attorney, Gerald J. McMahon, said his client was "not guilty of these fraudulent charges." He also disputed Chierchio was involved in organized crime. "If he were not Italian, there would be no accusation of this nature," he told The Associated Press.

Russo and Smookler allegedly threatened to torture an individual's wife and children.

It was not immediately clear whether the defendants had attorneys who could comment on the charges.

FROM THE FOX 5 NY ARCHIVE: AN INTERVIEW WITH JASON KURLAND IN 2016

Jason Kurland was a guest in Good Day New York.

STATEMENTS FROM U.S. ATTORNEY AND FBI

"Defendant Kurland allegedly violated the law and his oath as a lawyer when he allowed co-conspirators to pillage his clients' bank accounts for their own enrichment. In addition, Russo and Smookler allegedly threatened to torture an individual's wife and children. The defendants callously thought they could line their pockets with lottery winnings without consequence, but today their luck ran out." —Seth D. DuCharme, Acting U.S. Attorney for the Eastern District of New York

"Lottery winners can't believe their luck when they win millions of dollars, and the men we arrested this morning allegedly used that euphoric feeling to their advantage. The FBI New York discovered how these victims were persuaded to put large chunks of their cash into investments that benefited the defendants. Rather than try their luck at the lottery, these men resorted to defrauding the victims to get rich, but their gamble didn't pay off." —William F. Sweeney Jr., Assistant Director-in-Charge, Federal Bureau of Investigation, New York Field Office