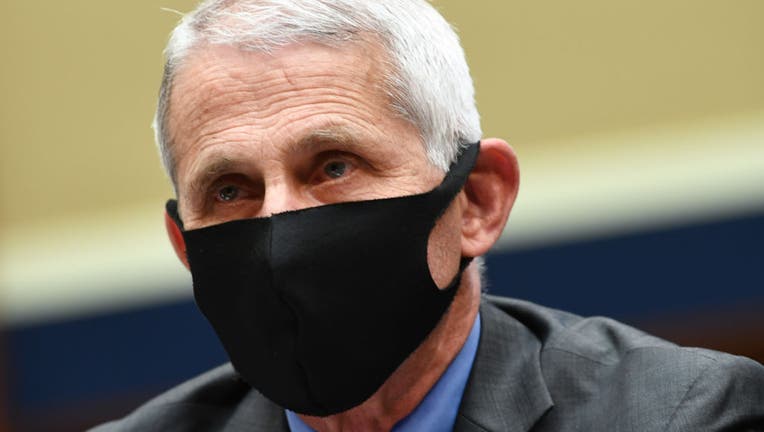 Dr. Anthony Fauci, director of the National Institute for Allergy and Infectious Diseases, waits to testify at a hearing of the House Committee on Energy and Commerce on Capitol Hill on June 23, 2020 in Washington, DC. The committee is investigating

Fauci, head of the National Institute of Allergy and Infections Diseases, spoke via video conference to physicians and medical students at New Hampshire’s Dartmouth-Hitchcock Medical Center. He said while the nation’s “default principle” should be that children return to school, “to say that every child has to go back to school is not really realizing the fact that we have such a diversity of viral activity.”

Determined to reopen America’s schools despite coronavirus worries, President Donald Trump recently threatened to hold back federal money if school districts don’t bring their students back in the fall. He and top White House aides also have been ramping up attacks against Fauci, with Trump saying the longtime public health official has “made a lot of mistakes.”

In the discussion Monday, Fauci was also asked about how to accelerate public acceptance of face coverings to prevent the spread of the virus. He cited two problems: Young people who don’t take the virus seriously, and those who have politicized the wearing of masks.

New Hampshire is the only New England state without a mask mandate for the general public, and for now, the number of people testing positive for the virus remains low. But that likely will change in September, Dr. Joanne Conroy, president and CEO of Dartmouth-Hitchcock, said when asked whether Republican Gov. Chris Sununu should issue a mask mandate.

“I would say we're having a bunch of students come back in the fall, and UNH is having a bunch of students coming back, from all over the country — we should probably get used to mask wearing because we should expect the incidence of infection to increase,” she said. “As leaders we have to support universal masking because I know it will protect the individuals in our community. I understand all the political ramifications for each of these governors to take that stand but as leaders, we know it's going to keep people safe, so we may have to lead on that.”

In other coronavirus-related developments:

Mandatory face covering ordinances were on the agenda for public meetings in three communities Monday, including two college towns.

In Portsmouth, the City Council was scheduled to begin reviewing a proposed ordinance that would require face coverings to be worn by anyone over age 6 while in indoor settings accessible to the public or outdoors when 6 feet of social distancing isn't possible.

In Hanover, home to Dartmouth College, the Select Board was holding a public hearing in a proposed ordinance that would require masks for anyone over age 2, though it would only apply in certain areas of town. Similarly, the proposal being discussed by the Durham Town Council also would be restricted to certain areas, though it would apply to anyone age 10 or older.

Town administrator Todd Selig issued an order in late May requesting residents to wear face coverings to prevent the spread of the coronavirus but said compliance “has been less than desired.” With thousands of students set to return to the University of New Hampshire later this month, numerous community members have said they will avoid downtown Durham and shop elsewhere unless mask wearing is mandated, he said.

"Wearing masks in public is the responsible thing to do. It conveys the clear message, ‘I care about your health, in addition to my own,’” he said in a statement.

As of Sunday, 6,634 people had tested positive for the virus in New Hampshire, an increase of 21 from the previous day. One new death was announced, bringing the total to 417. The 7-day rolling average of daily new cases has not increased over the past two weeks; it was 25 new cases per day on both July 19 and Aug. 2.

For most people, the virus causes mild or moderate symptoms. For some, especially older adults and the infirm, it can cause more severe illness and can lead to death.