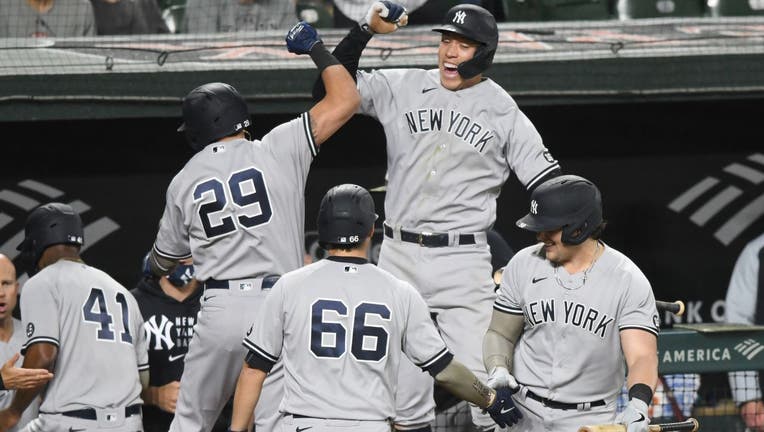 Gio Urshela #29 of the New York Yankees celebrates a pinch hit three run home run in the seventh inning with Aaron Judge #99 during a baseball game against the Baltimore Orioles at Oriole Park at Camden Yards on May 14, 2021 in Baltimore, Maryland. (

NEW YORK (AP) - A New York Yankees player and several team staffers tested positive for the coronavirus although they were vaccinated, the baseball club said this week, underscoring that it's possible to get an infection even after the shots.

A brief look at the cases:

WHAT HAPPENED WITH THE TEAM?

Player Gleyber Torres, three coaches and four staff member have tested positive for the virus since Sunday. All eight had gotten the one-dose Johnson & Johnson vaccine in March or April, the Yankees said. With the J&J shot, people are considered fully protected two weeks later. Seven of the eight did not develop any symptoms; a coach had symptoms that have since gone away, the team said.

WHY DID THIS HAPPEN?

No vaccine works 100% of the time — infections and illnesses can still happen. Studies have shown the two-dose Pfizer and Moderna vaccines are about 95% effective at preventing illness, while the Johnson & Johnson vaccine is 72% effective, though direct comparisons of the vaccines are difficult. So sometimes vaccinated people pick up an infection or get sick. Experts say vaccination could help make any illnesses less severe.

The Centers for Disease Control and Prevention notes newer versions of the coronavirus could be a factor in what's known as "breakthrough" cases, though evidence so far indicates the vaccines in the U.S. protect against these variants.

HOW DOES THIS HAPPEN?

It’s difficult to pinpoint why a person might get infected or sick with COVID-19 after being fully vaccinated. The reasons vary, and could include how much of the virus vaccinated people are exposed to, said Dr. William Moss, a vaccine expert at the Johns Hopkins Bloomberg School of Public Health.

Individual differences in how well our immune systems respond to vaccines is another factor in why vaccinated people could still get sick. Some people, for example, have other health conditions or take medications that could make the shots less effective.

"All of these kinds of problems can suppress the immune system, and that would result in a less than optimal response to the vaccine," Moss said.

Though less likely, vaccines might have been improperly stored or administered, he noted. Or people might also have been exposed to the virus before the shots took full effect.