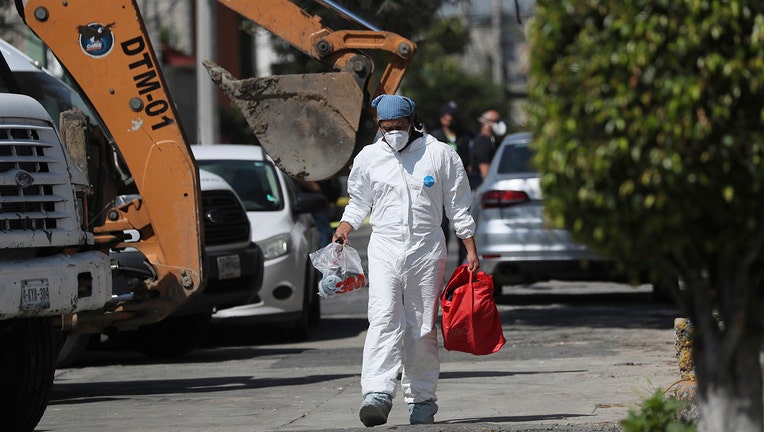 A forensic investigator carries equipment outside the house where police found bones under the floor in the Atizapan municipality of the State of Mexico, Thursday, May 20, 2021. Police have turned up bones and other evidence under the floor of the ho

MEXICO CITY - Investigators digging under the house of a suspected serial killer on the outskirts of Mexico City said Saturday they have found 3,787 bone fragments so far, apparently belonging to 17 different victims.

Prosecutors in the State of Mexico, which borders Mexico City, suggested the grisly finds may not end there. In excavations carried out since May 17, authorities have dug up the floors of the house where the suspect lived. They now plan to extend the search to the soil beneath several other rooms he rented out on the same property.

ID cards and other possessions from people who disappeared years ago were found at the junk-filled home, suggesting the trail of killings may go back years.

The number of bone fragments found underneath concrete floors at the suspect's home would imply the corpses may have been hacked into tiny pieces. That could make sense: the suspect, identified by prosecutors only as "Andrés," was formerly a butcher and in fact sectioned and filleted his last victim.

"The bones fragments are being subjected to ‘lateralization’ studies, which include carefully cleaning each one, identifying what part of the body they are and then placing them in their anatomical position, providing a method for determining the approximate number of victims," the office said in a statement.

"This analysis indicates that, up to now, the bone fragments found may possibly be those of 17 people," the statement said.

Authorities have not released the full name of the 72-year-old suspect under Mexican laws protecting a suspect’s identity.

He has been ordered to stand trial in the killing of his last victim, a 34-year-old woman whose body he allegedly dismembered with a butcher’s hacksaw and knives on May 14.

He was caught, not as a result of keen investigative work, but because his most recent alleged victim was the wife of a police commander whom he knew personally. He was to have accompanied the victim on a shopping trip the day she disappeared, so her husband suspected him when she failed to return.

The police officer gained access to police surveillance cameras showing his wife had entered, but not left, the street where the suspect lived; the policeman went to the home, confronted the suspect, and found his wife's hacked-up body inside.

But what investigators also found was women’s clothing, voter IDs and audio and video tapes suggesting he may have recorded his victims.

The format of the video tapes found at the house may suggest how far the killings went back: authorities found 28 8mm video tapes, which were discontinued around 2007, and 25 VHS cassettes, which largely fell out of favor by 2016.

However, outdated tech formats often remain in use in Mexico after they have been abandoned in other countries.

In total, prosecutors said they have found 91 photographs, many of the type people would have used to obtain ID cards; eight cellphones, and women's jewelry and makeup.

Prosecutors said they are still examining the bone fragments to see if they can extract any DNA to identify the victims.