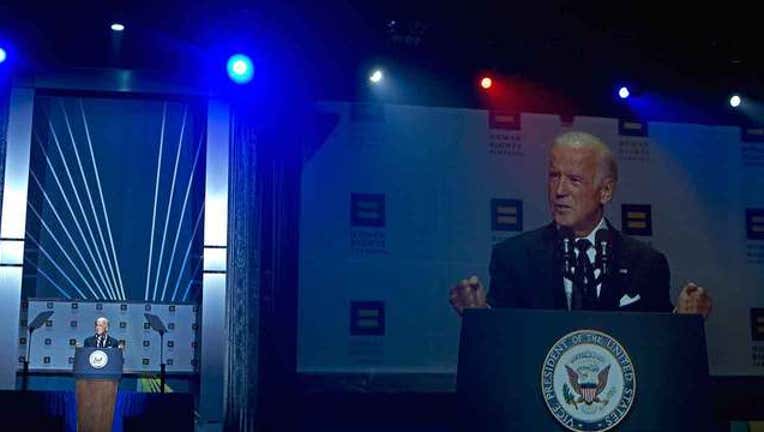 WASHINGTON (AP) -- The unexpected rise of Bernie Sanders will be on display Tuesday night as he and Hillary Rodham Clinton meet face to face in the first Democratic Party presidential debate. Sanders, the independent senator from Vermont, is a self-described Democratic socialist calling for "political revolution."

Clinton has increasingly moved to the left on domestic policy since announcing her campaign.

The surprise rivalry between Clinton and Sanders will be at the forefront as Democrats take the stage at the Wynn Hotel in Las Vegas for the party's first debate of the 2016 campaign. The senator and the former secretary of state will be joined by a trio of candidates who occupy the basement of early polls, each looking to change their fortunes with a breakout moment in prime time.

Hanging over Tuesday's contest will be the shadow of Biden, who is flirting with a late entry into the Democratic field and is expected to announce his decision within days.

While Biden's political advisers have been talking to potential staff and donors, he is not expected to upend the debate by revealing his political plans in the hours before the candidates take the stage.

CNN, however, says it has an extra podium on standby in case the Vice President decides to join the group.

Despite the Biden speculation, the Democratic primary has lacked the drama of the Republican contest and the unexpected rise of Donald Trump. Debate host CNN has already said it expects significantly lower ratings for Tuesday's debate than the Republican contest the cable channel hosted in late September, which drew an audience of 23 million.

Still, the debate will be the largest audience for Democratic candidates since the primary race began. It's one of six debates the Democratic National Committee has sanctioned, a point of contention among some candidates seeking more nationally televised events to generate much needed attention.

Leading the push for more debates is Martin O'Malley, the former Maryland governor who sought to be Clinton's chief rival. O'Malley has been sharply critical of what he sees as Clinton's flip-flopping on policy and has also said questions about her email use are legitimate.

Democratic strategist Jim Manley said he expected O'Malley to be aggressive in going after Clinton in the debate, mostly because it's his only chance to draw attention to his own campaign.

"This is a chance for him to establish a rationale for his candidacy, which so far has been missing," Manley said.

Also on stage will be former Virginia Sen. Jim Webb, a decorated Vietnam veteran who criticized Clinton for her early support of the Iraq war and could push her on her hawkish foreign policy positions Tuesday. Rounding out the five-person field is Lincoln Chafee, the Republican-turned independent-turned Democrat from Rhode Island whose most notable campaign moment thus far was his call for the U.S. to adopt the metric system.