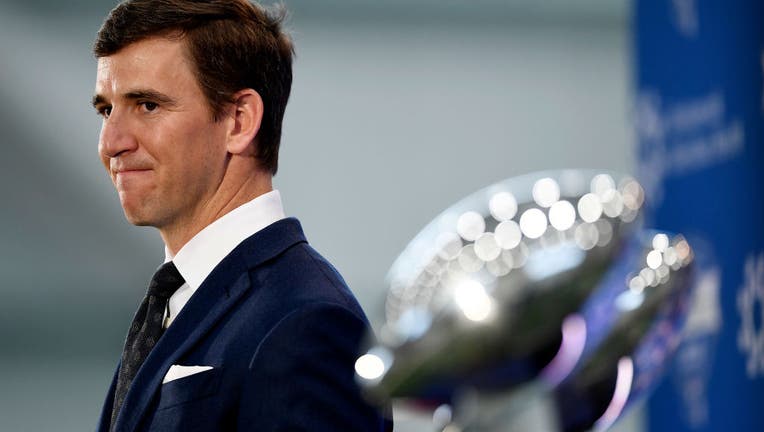 Eli Manning of the New York Giants announces his retirement during a press conference on January 24, 2020 at Quest Diagnostics Training Center in East Rutherford, New Jersey. The two-time Super Bowl MVP is retiring after 16 seasons with the team. (Ph

EAST RUTHERFORD, N.J. (AP) — Eli Manning retired from the NFL after 16 seasons just the way he wanted, as a hard-working, career-long New York Giant who did it his way in leading the franchise to two Super Bowls.

Saying he had no regrets, the 39-year-old Manning officially ended his career on Friday at a packed news conference surrounded by his family, friends and former teammates and coaches and two Lombardi trophies.

Manning said he had no immediate plans, although he admitted he would miss the time with teammates, the preparation and the beers in the back of the bus after wins. He plans to spend some time reliving the positives memories, enjoying himself and being an assistant coach on his daughter's third-grade basketball team. A job with the Giants is a possibility, he said.

“From the very first moment I did it my way,” said the low-key Manning, who comes from a well-known football family. “I could not be someone other than who I am. Undoubtedly, I would have made the fans, the media, even the front office more comfortable being a rah-rah guy.

“But that's not me," Manning said. “Ultimately I choose to believe that my teammates and the fans learned to appreciate that. What they got was pure unadulterated Eli."

The Giants also got their career leading passer in almost every category in a career that started after New York acquired him on draft day in 2004 from the Chargers. He led the Giants to titles after the 2007 and '11 seasons, beating the Patriots both times.

Manning had a string of 222 consecutive starts between the end of his rookie year into late into the 2017 season. His final season ended with him being replaced by rookie Daniel Jones as the starting quarterback after two games. He did have a final hurrah, starting and winning a game over the Dolphins after Jones was hurt in December.

“That was my farewell and a moment I will cherish forever," said Manning.