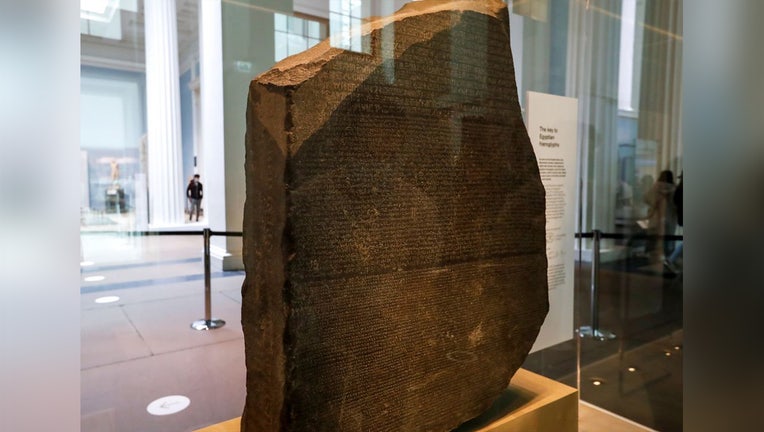 FILE - The Rosetta Stone is seen at the British Museum in London, Britain, May 17, 2021. (Han Yan/Xinhua via Getty Images)

CAIRO - The debate over who owns ancient artifacts has been an increasing challenge to museums across Europe and America, and the spotlight has fallen on the most visited piece in the British Museum: The Rosetta stone.

The inscriptions on the dark grey granite slab became the seminal breakthrough in deciphering ancient Egyptian hieroglyphics after it was taken from Egypt by forces of the British empire in 1801.

Now, as Britain's largest museum marks the 200-year anniversary of the decipherment of hieroglyphics, thousands of Egyptians are demanding the stone’s return.

‘’The British Museum’s holding of the stone is a symbol of Western cultural violence against Egypt," said Monica Hanna, dean at the Arab Academy for Science, Technology & Maritime Transport, and organizer of one of two petitions calling for the stone's return.

The acquisition of the Rosetta Stone was tied up in the imperial battles between Britain and France. After Napoleon Bonaparte’s military occupation of Egypt, French scientists uncovered the stone in 1799 in the northern town of Rashid, known by the French as Rosetta. When British forces defeated the French in Egypt, the stone and over a dozen other antiquities were handed over to the British under the terms of an 1801 surrender deal between the generals of the two sides.

It has remained in the British Museum since. 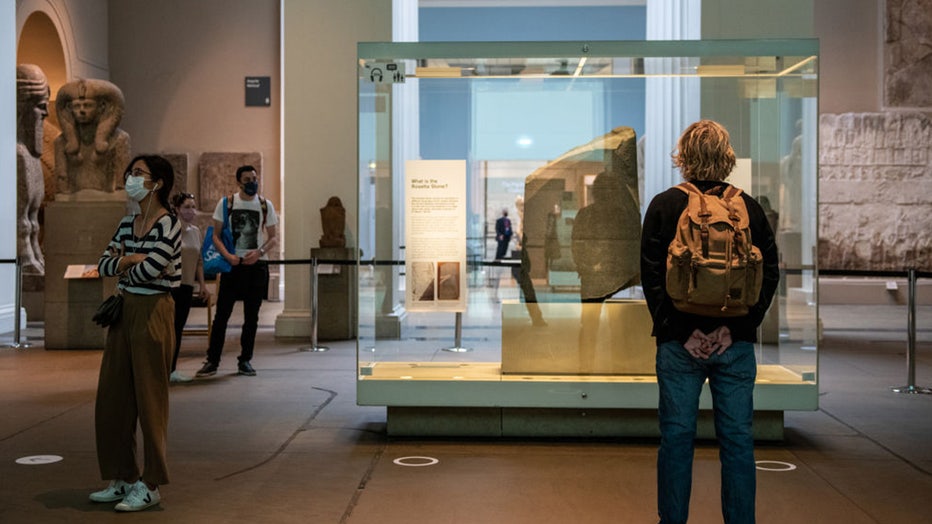 FILE - Visitors wearing face masks look at the Rosetta Stone next to social distancing markers on the floor at the British Museum on August 27, 2020, in London, England.  (Chris J Ratcliffe/Getty Images)

Hanna’s petition, with 4,200 signatures, says the stone was seized illegally and constitutes a "spoil of war." The claim is echoed in a near identical petition by Zahi Hawass, Egypt’s former minister for antiquities affairs, which has more than 100,000 signatures. Hawass argues that Egypt had no say in the 1801 agreement.

The British Museum refutes this. In a statement, the Museum said the 1801 treaty includes the signature of a representative of Egypt. It refers to an Ottoman admiral who fought alongside the British against the French. The Ottoman sultan in Istanbul was nominally the ruler of Egypt at the time of Napoleon’s invasion.

The Museum also said Egypt’s government has not submitted a request for its return. It added that there are 28 known copies of the same engraved decree and 21 of them remain in Egypt.

The contention over the original stone copy stems from its unrivaled significance to Egyptology. Carved in the 2nd century B.C., the slab contains three translations of a decree relating to a settlement between the then-ruling Ptolemies and a sect of Egyptian priests. The first inscription is in classic hieroglyphics, the next is in a simplified hieroglyphic script known as Demotic, and the third is in Ancient Greek.

Through knowledge of the latter, academics were able to decipher the hieroglyphic symbols, with French Egyptologist Jean-Francois Champollion eventually cracking the language in 1822.

‘‘Scholars from the previous 18th century had been longing to find a bilingual text written in a known language,’’ said Ilona Regulski, the head of Egyptian Written Culture at the British Museum. Regulski is the lead curator of the museum’s winter exhibition, "Hieroglyphs Unlocking Ancient Egypt," celebrating the 200th anniversary of Champollion’s breakthrough.

The stone is one of more than 100,000 Egyptian and Sudanese relics housed in the British Museum. A large percentage were obtained during Britain’s colonial rule over the region from 1883 to 1953.

It has grown increasingly common for museums and collectors to return artifacts to their country of origin, with new instances reported nearly monthly. Often, it’s the result of a court ruling, while some cases are voluntary, symbolizing an act of atonement for historical wrongs.

New York’s Metropolitan Museum returned 16 antiquities to Egypt in September after a U.S. investigation concluded they had been illegally trafficked. On Monday, London’s Horniman Museum signed over 72 objects, including 12 Benin Bronzes, to Nigeria following a request from its government.

Nicholas Donnell, a Boston-based attorney specializing in cases concerning art and artifacts, said no common international legal framework exists for such disputes. Unless there is clear evidence an artifact was acquired illegally, repatriation is largely at the discretion of the museum.

‘‘Given the treaty and the timeframe, the Rosetta stone is a hard legal battle to win,’’ said Donnell.

The British Museum has acknowledged that several repatriation requests have been made to it from various countries for artifacts, but it did not provide The Associated Press with any details on their status or number. It also did not confirm whether it has ever repatriated an artifact from its collection.

For Nigel Hetherington, an archaeologist and CEO of the online academic forum Past Preserves, the museum’s lack of transparency suggests other motives.

‘‘It’s about money, maintaining relevance and a fear that in returning certain items people will stop coming,’’ he said.

Western museums have long pointed to superior facilities and larger crowd draws to justify their holding of world treasures. Amid turmoil following the 2011 uprising that toppled autocrat Hosni Mubarak, Egypt saw an uptick in artifact smuggling, which cost the country an estimated $3 billion between 2011 and 2013, according to the U.S.-based Antiquities Coalition. In 2015, it was discovered that cleaners at Cairo’s Egyptian Museum had damaged the burial mask of Pharaoh Tutankhamun by attempting to re-attach the beard with super glue.

But President Abdel Fattah el-Sissi’s government has since invested heavily in its antiquities. Egypt has successfully reclaimed thousands of internationally smuggled artifacts and plans to open a newly built, state-of-the-art museum where tens of thousands of objects can be housed. The Grand Egyptian Museum has been under construction for well over a decade and there have been repeated delays to its opening.

Egypt’s plethora of ancient monuments, from the pyramids of Giza to the towering statues of Abu Simbel at the Sudanese border, are the magnet for a tourism industry that drew in $13 billion in 2021.

For Hanna, Egyptians’ right to access their own history should remain the priority. "How many Egyptians can travel to London or New York?" she said.

Egyptian authorities did not respond to a request for comment regarding Egypt's policy toward the Rosetta stone or other Egyptian artifacts displayed abroad. Hawass and Hanna said they are not pinning hopes on the government to secure its return.

‘‘The Rosetta stone is the icon of Egyptian identity,’’ said Hawass. ‘‘I will use the media and the intellectuals to tell the (British) museum they have no right.’’