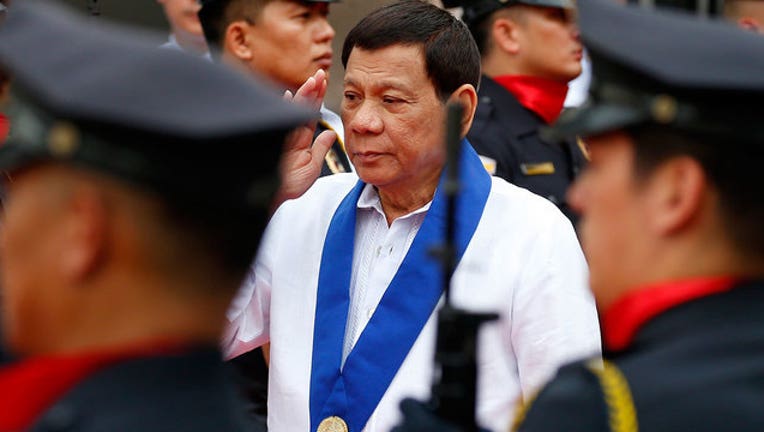 MANILA, Philippines (AP) - Philippine President Rodrigo Duterte offered a bounty to anybody who can deliver to him the head of the communist rebel leader behind the killings of four police intelligence officers last week in an insurgency-hit central province.

Duterte said in a speech late Thursday that he raised a reward of 3 million pesos ($59,000) and would considerably increase the amount out of anger for what he described as the Islamic State group-style killings of the officers on July 18 in Negros Oriental province.

The officers were taken hostage, beaten up and killed then burned, Duterte said, but police and military officials gave varying accounts of how the policemen were slain. Communist guerrillas claimed responsibility for the ambush that killed the law enforcers but denied torturing them.

Police reported that communist rebels opened fire on the four policemen, who were traveling on two motorcycles, in an ambush then took their pistols in the coastal town of Ayungon. The New People's Army guerrillas, they said, later withdrew to a forested hinterland after the attack.

Regional military commander Lt. Gen. Noel Clement, however, said each of the policemen was shot in the head once while likely kneeling or sprawled on the ground, citing police autopsy reports. The four were to meet an informant when they were seized by about 20 to 25 rebels, who were now being hunted.

"They were burned like (by) ISIS that's why I got mad," Duterte said in a speech, using the acronym of the name of the Islamic State group.

Duterte, who visited the wake of the officers over the weekend, said he plans to raise the bounty up to 20 million pesos ($392,000) to increase the pressure and chances of the insurgents being captured.

Duterte said he only wanted the head and not the body of the leader of the killers because a complete body would only be used by activists in a ceremony to generate sympathy - using rhetoric that human rights activists have said could encourage state forces to commit rights violations with impunity.

The 74-year-old leader, a former government prosecutor, then asked if there were members of a left-wing human rights group called Karapatan in the audience. "You really deserve to be hit, you fools," Duterte said of the group, which has blamed government forces for the killings of several of its activists.

Duterte has already raised international alarm for his bloody campaign against illegal drugs that has left thousands of mostly petty drug suspects dead.

The communist insurgency has raged in the Philippines for more than 50 years in one of Asia's longest-running rebellions. Battle losses, surrenders and infighting, however, have reduced the number of armed insurgents to about 3,500 from more than 20,000 at the height of their rural-based rebellion, the military says.