The drone video, posted to Instagram, shows footage of Vancouver, British Columbia's tall buildings and dense smoke in the area.

The government of Canada issued an air quality advisory for Vancouver, British Columbia on Sept. 14, warning of “poor air quality and reduced visibility.”

According to IQAir, an air quality monitoring system, Vancouver had the second-highest pollution city ranking of all major cities in the world.

The drone video, posted to Instagram, shows footage of Vancouver’s tall buildings and dense smoke in the area.

“When it happened in real life I just had to go out and take a shot,” Davide Sibilia, a drone videographer, told FOX TV Stations. “What the video doesn’t show is the smell. BBQ smell, but after a few days you feel it inside.”

The videographer watched the footage live, using goggles. “When you pilot this type of drone you really feel you are inside it,” Sibilia said.

“I am used to seeing Vancouver from that height, that's the park downstairs from my apartment. This time was very different. As soon as I was getting altitude the smoke was getting denser, and I had a moment where I was thinking where the hell had I ended up? I didn't expect from the ground to see such amount of dense smoke. I was surprised I could not see the water from such altitude,” Sibilia added.

Wildfires continue to scorch millions of acres in the western United States, and the smoke has reached as far as the Midwest and Northeast. The jet stream and upper-level wind flow were able to transport the smoke, bringing Michigan residents a murky haze in the sky. 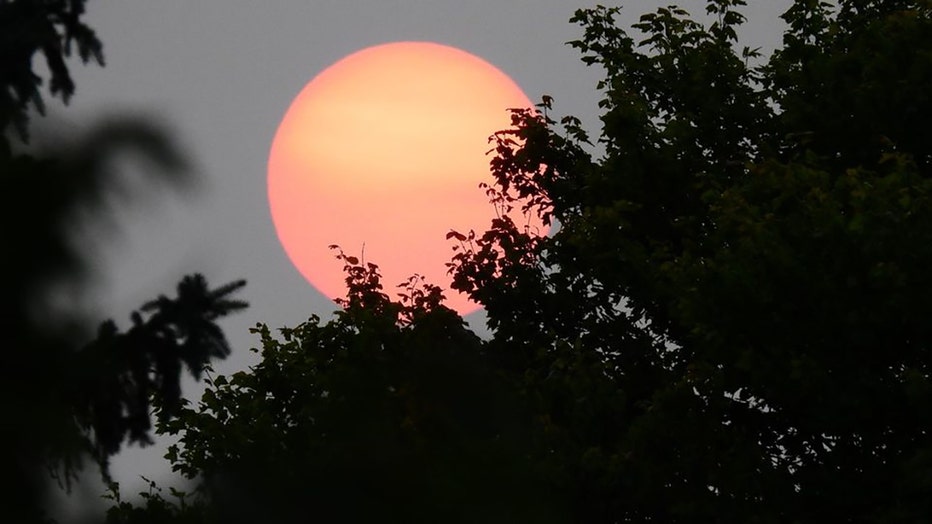 The smoke brought a reddish tint to the moon and sun in Michigan and other parts of the country not directly impacted by wildfires.

The Environmental Protection Agency warned that wildfire smoke can cause poor air quality and irritate an individual’s eyes, nose, throat and lungs, making it difficult to breathe.

"People with asthma and other respiratory conditions may exhibit symptoms from such exposure and if so, should remain in close contact with their health care providers," the EPA told FOX TV stations. "If the levels are unhealthy, they should stay indoors, keep doors and windows closed when temperatures permit, operate air purifiers or HVAC systems with air filters, and stop or minimize outdoor activity. We also recommend that everyone near the fires pay close attention to local authorities for fire and evacuation warnings and prepare a plan for a quick departure, if necessary," the EPA said.

A passenger recorded eerie video as her plane took off into eerie orange clouds as fires rage on in the Bay Area.

Forecasters say the air quality will likely remain at unhealthy levels as the smoke persists from the fires.

“As a weak low pressure approaches the West Coast later this week and into the weekend, slightly stronger onshore winds may help to disperse smoke somewhat, and rain showers in the Pacific Northwest may reduce fire activity slightly,” Patrick H. Zahn, lead forecaster at Sonoma Technology, an environmental consulting firm in Northern California, said. “However, the long-range air quality outlook depends heavily on the fire behavior of numerous large fires along the West Coast. If the fires continue to burn and produce significant smoke, air quality impacts could be felt into next week or longer.”