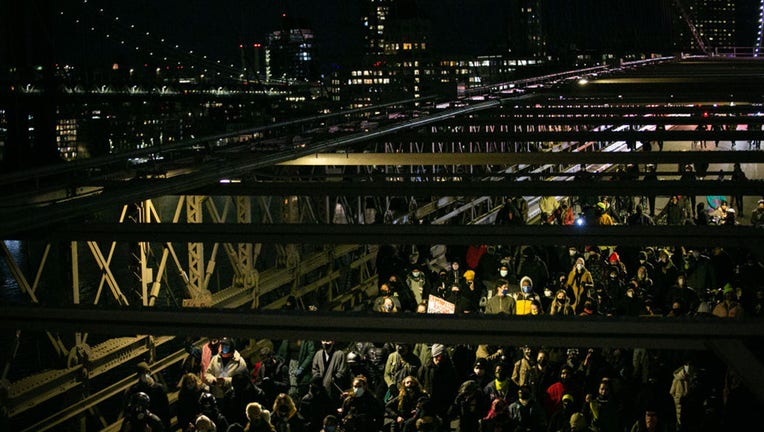 On January 19, 2021 in New York, US, an estimated 300 protesters marched from the Barclay's Center across the Brooklyn Bridge to City Hall in New York City for Martin Luther King Jr. Day. (Photo by Karla Ann Cote/NurPhoto via Getty Images)

Shea said some of Monday's protesters were throwing bottles, destroying property and calling for the death of officers as they marched from Brooklyn to lower Manhattan. Several people were injured. Most refused medical attention while several others were treated at hospitals and released.

"People need to finally come down to the truth here and say whatever this is it certainly does not resemble a peaceful protest," Shea said during a televised interview.

The gathering started as a celebration of King's legacy. Some people from that group then marched across the Brooklyn Bridge and later clashed with police in lower Manhattan.

Videos posted from the scene of the protest show dozens of helmeted officers trying to clear an area near City Hall.

Jordan Plaza, 20, told The New York Times that a relatively small number of protesters had spilled off the sidewalk and into the street when the police announced that they were obstructing the road and would be arrested.

"They weren’t approaching the police in a violent manner," said Plaza, who said she happened upon the protest and joined on a whim. "Police randomly surged."

The New York state attorney general is suing the NYPD over its handling of protests. The lawsuit outlined examples of alleged police misconduct during the spring demonstrations in the wake of the killing of George Floyd in Minnesota.

Shea referred to the lawsuit as he defended the policing of Monday's protest.

"This isn’t actions that are caused by police officers, so that’s a news flash for the AG," the commissioner said. "This is actions caused by people that want to destroy our way of life and our city. And we’re not going to let it happen."

NYPD Police Commissioner Dermot Shea talks with Good Day New York about the ways the NYPD is being transformed in a new era of policing.