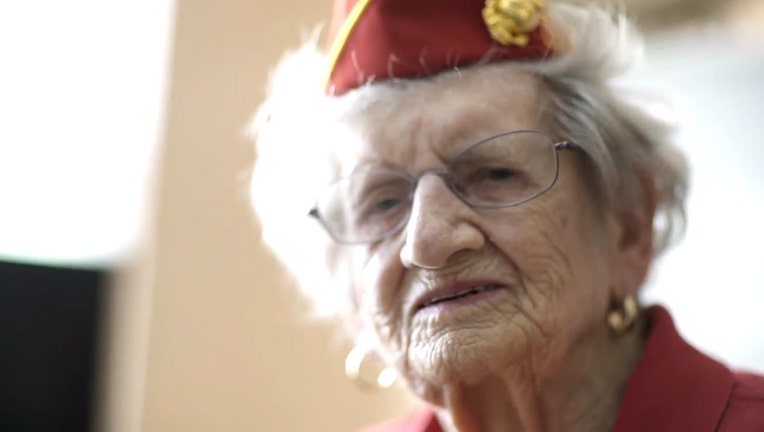 Beth Kluttz, Cole's only child, confirmed Friday that her mother died of a heart attack at Kluttz's home in Kannapolis, North Carolina, on Jan. 7.

Cole, also affectionately known as Dot, was born on Sept. 19, 1913 in Warren, Pennsylvania. She enlisted to join the Marines in 1941 after the attack on Pearl Harbor, according to the Marine Corps.

"Everyone was out doing something. Women helping the Red Cross or even in churches, they were knitting things," Cole said. "So I decided that I wanted to do something and I would go into the Marine Corps."

She completed her training at Camp Lejeune, according to a tweet by the City of Kannapolis, North Carolina where Cole, and was then stationed at Quantico primarily in an administrative role.

In July 1942, President Franklin D. Roosevelt signed the Marine Corps Women’s Reserve into law, giving women the chance to fill positions left open by men headed to combat. The Corps delayed formation of the branch until February 1943, and Cole enlisted five months later at age 29, becoming one of the earliest volunteers for the branch.

Women were not initially welcomed to join the Marine Corps during WWII, however, in February 1943, the first women were allowed to join, according to the National WWII Museum.

"Attempts were made to come up with a cute, catchy name for women in the Corps, with suggestions such as ‘Glamarines,’ ‘Dainty Devil-Dogs,’ and ‘Sub-Marines’ being a few," the museum said.

However, Maj. Gen. Thomas Holcomb, Commandant of the Corps, refused the nicknames given to women who joined and stated that they were Marines.

"They don’t have a nickname and they don’t need one…They inherit the traditions of Marines. They are Marines," he said.

The number of women joining the Maine Corps was overwhelming in 1943, and the first platoon to graduate from US Naval Training School did not even have complete uniforms, according to the museum.

But by the end of WWII, women in the Marines had a solid place within the Corps, with over 18,000 members.

Despite putting in 200 hours in the cockpit of a Piper Cub, Cole completed six weeks of boot camp at Camp Lejeune with the Women’s Reserve’s First Battalion and wound up "behind a typewriter instead of an airplane."

Cole's husband, Wiley, was in the Navy and served on the aircraft carrier USS Hornet, which sailed in both the Pacific Theater and the Solomon Islands campaign during World War II before it was torpedoed and sunk in October 1942.

Cole moved to San Francisco after the war to be with Wiley. They married and had their only child in 1953. The couple were both hired by the Ames Research Center in Silicon Valley in California before Wiley Cole died of a heart attack in 1955.

Kluttz moved from California to North Carolina in 1976 and Cole followed her to the area around 1979.