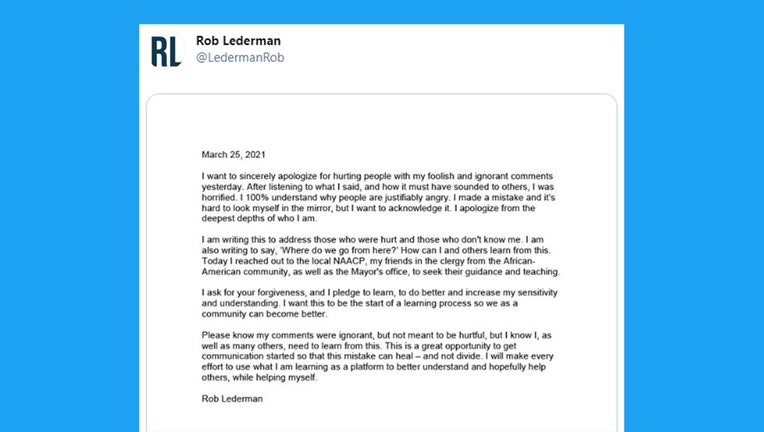 BUFFALO, N.Y. (AP) - A morning radio host fired after using Black celebrities' skin tones to describe how he likes his toast apologized Thursday, saying he was horrified when he listened to himself and vowed to learn from it.

"I 100% understand why people are justifiably angry," Rob Lederman wrote in a statement on Twitter. "I made a mistake and it's hard to look myself in the mirror, but I want to acknowledge it."

Cumulus Media, the owner of 97 Rock in Buffalo, said it "swiftly terminated" Lederman Wednesday because his comments that morning violated the company's programming principles. Two other on-air hosts were suspended.

As a clip of the Morning Bull Podcast, with references to Serena Williams, Halle Berry and Gayle King, circulated online, several advertisers responded by pulling their ads.

"Please know my comments were ignorant, but not meant to be hurtful, but I know I, as well as many others, need to learn from this," wrote Lederman, who said he has reached out to Black civil rights and religious leaders and Mayor Byron Brown's office for guidance.

The mayor, who is Black, was one of several elected officials to publicly condemn the exchange.

"The racist commentary made on 'The Morning Bull' show on 97 Rock is outrageous and intolerable," Brown said in a statement.