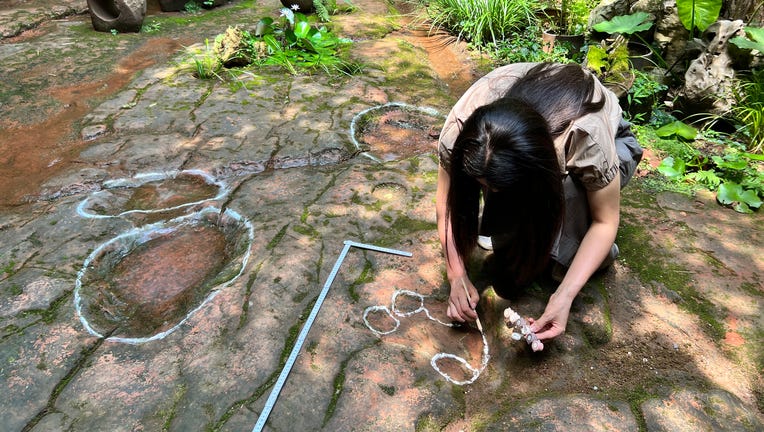 The footprints are pictured at the restaurant in Leshan, China. (Credit: Provided / Dr. Lida Xing)

BEIJING - Dinosaur footprints from over 100 million years ago were spotted by an observant diner with a love for paleontology at a restaurant in China.

A diner identified as Ou Hongtao, described as having an interest in paleontology, was eating at a restaurant on July 10 in the city of Leshan in the Sichuan Province. Hongtao noticed some particular dents in the ground in the yard of the restaurant and later contacted Dr. Lida Xing, an associate professor and doctoral adviser at the China University of Geosciences.

Xing told FOX Television Stations that his team of fellow paleontologists went to the restaurant on July 16 to investigate the imprints on the ground.

Xing said his team used a 3D scanner to confirm that it was the tracks of two brontosauruses from the early Cretaceous period, considered to be about 145 million to 100.5 million years ago.

The brontosaurus was a large sauropod, a group of typically large dinosaurs with long necks and long tails, that lived during the late Jurassic and early Cretaceous periods, according to the National History Museum in London.

The dinosaurs moved along the river in the dry environment of ancient Leshan and probably measured about 8 meters (26.2 feet), Xing previously told ECNS, the English-language website of China News Service. He added that this was the first time dinosaur footprints have been found in Leshan's city proper, adding to the significance of the discovery.

The footprints are pictured at the restaurant in Leshan, China. (Credit: Provided / Dr. Lida Xing)

When did dinosaurs walk the earth?

Dinosaurs walked the earth between about 245 and 66 million years ago in a time known as the Mesozoic Era. This was still millions of years before the first Homo sapiens appeared, according to the National History Museum.

Scientists divide the Mesozoic Era into three periods: the Triassic, Jurassic and Cretaceous. Also during this era, the land gradually split from one supercontinent — known as Pangea — into smaller ones.

This also brought climate and vegetation changes over time, which affected how dinosaurs evolved, the museum states.

During the Cretaceous period, when these two brontosauruses are believed to have lived, the land separated further into some of the continents we recognize today.

"The first snakes evolved during this time, as well as the first flowering plants. Various insect groups appeared, including bees, which helped increase the spread of flowering plants. And mammals now included tree climbers, ground dwellers and even predators of small dinosaurs," the National History Museum states.

But the end of the Cretaceous period saw "one of the most dramatic mass extinctions Earth has ever seen."

The exact nature of such a catastrophic event remains open to scientific debate, according to the history museum. Evidence suggests an asteroid impact is to blame, while volcanic eruptions that caused large-scale climate change may also have been involved. This, combined with more gradual changes to Earth's climate that occurred over millions of years, led to the huge extinction of dinosaurs.

Birds, which were the only dinosaurs to survive, as well as mammals, went on to evolve rapidly.

Nearly 3,800 animals are critically endangered, according to the International Union for Conservation of Nature (IUCN)'s Red List.

In China’s Sichuan province, many dinosaur fossils from the Jurassic period have been discovered, but not as many from the Cretaceous period, according to Xing.

The Cretaceous period is when "dinosaurs really flourished," Xing told CNN. He added, "this discovery is actually like a jigsaw, adding a piece of evidence to Sichuan's Cretaceous period and the diversity of dinosaurs."