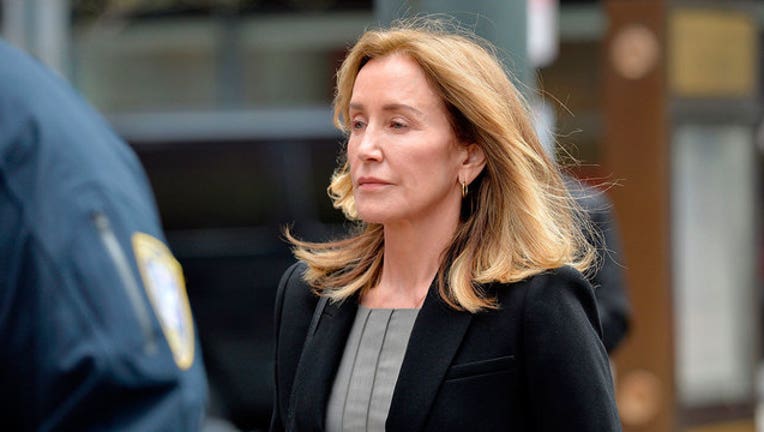 Actress Felicity Huffman is escorted by Police into court where she is expected to plead guilty to one count of conspiracy to commit mail fraud and honest services mail fraud at in Boston, Massachusetts. (Photo JOSEPH PREZIOSO/AFP/Getty Images)

BOSTON (AP) - Felicity Huffman and her lawyers pleaded Friday for probation, community service and a fine instead of jail time for her role in the college admissions scandal, buoyed by letters of support from her famous husband, William H. Macy, and her "Desperate Housewives" co-star Eva Longoria.

Huffman, in a three-page letter filed Friday with the federal court in Boston that is handling the sweeping bribery scheme, said she has "a deep and abiding shame" for her actions.

She said she has found motherhood to be "bewildering" and had turned to the scheme in the hopes of giving her oldest daughter a chance to pursue her dream of acting.

Huffman said in the letter that her daughter has a diagnosed learning disability and struggles with math.

"In my desperation to be a good mother, I talked myself into believing that all I was doing was giving my daughter a fair shot," Huffman wrote to U.S. District Judge Indira Talwani. "I see the irony in that statement now because what I have done is the opposite of fair. I have broken the law, deceived the educational community, betrayed my daughter, and failed my family."

U.S. Attorney Andrew Lelling, meanwhile, argues that Huffman should spend 30 days in jail because she knew the scheme was wrong and participated anyway.

"Her efforts weren't driven by need or desperation, but by a sense of entitlement, or at least moral cluelessness, facilitated by wealth and insularity," his office wrote in its filing Friday. "Millions of parents send their kids to college every year. All of them care as much she does about their children's fortunes. But they don't buy fake SAT scores and joke about it ('Ruh Ro!') along the way."

Huffman used the Scooby-Doo catchphrase in an email after her daughter's high school tried to make her take the exam with its own proctor instead of one preferred by the consultant she was paying.

Huffman's filing also included more than two dozen letters of support, among them pleas from Macy and Longoria.

Macy, who wasn't charged in the scheme, said in his own letter to the judge that their family has struggled since his wife's arrest.

Huffman has rarely left the house and hasn't received an audition or job offer since her arrest six months ago, he said.

Their oldest daughter is taking a gap year and not attending college for now, Macy said. And the family, which also includes a younger daughter in high school, is also seeing a therapist together.

"Felicity's only interest now is figuring out how to make amends," Macy wrote, "and help her daughters heal and move on."

Longoria, in her two-page statement, recalls Huffman had a "gentle character" and "kind heart" while the two starred in "Housewives."

"When I began the TV show, I was very new to the business and industry as a whole. Felicity was the first one to take me under her wing," she wrote. "I know I would not have survived those years if it wasn't for the friendship of Felicity."

Longoria also wrote: "She always leads with her heart and has always put others first."

Huffman is among 51 people charged in a scheme in which prosecutors say wealthy parents paid an admissions consultant to bribe coaches and test administrators to help their children get into prestigious colleges.

She pleaded guilty in May to fraud charges for paying $15,000 to have a proctor correct her daughter's SAT exam answers. She is scheduled to be sentenced Sept. 13.

The amount she paid is among the smaller bribes alleged in the scheme. Fellow actress Lori Loughlin and her fashion designer husband, Mossimo Giannulli, for example, are charged with paying $500,000 for their two daughters to get into college. Unlike Huffman, they are fighting the charges.

Huffman's lawyers are arguing for one year of probation, 250 hours of community service and a $20,000 fine. They say in their filing that fraud cases involving standardized tests "almost always" result in probation and that incarceration is "exceptionally rare."

They also argue that a sentence including 250 hours of community service would be significantly more than judges typically hand down.

Huffman's lawyers say the 56-year-old Emmy Award-winning actress proposes completing those service hours with organizations that work with at-risk youth in the Los Angeles area, where she lives.

The U.S. attorney's office also seeks a year of probation after jail and a $20,000 fine.

It argues that a one-month jail sentence recognizes that Huffman quickly accepted responsibility after being arrested and charged. Under federal sentencing guidelines, prosecutors could have sought up to six months' incarceration.